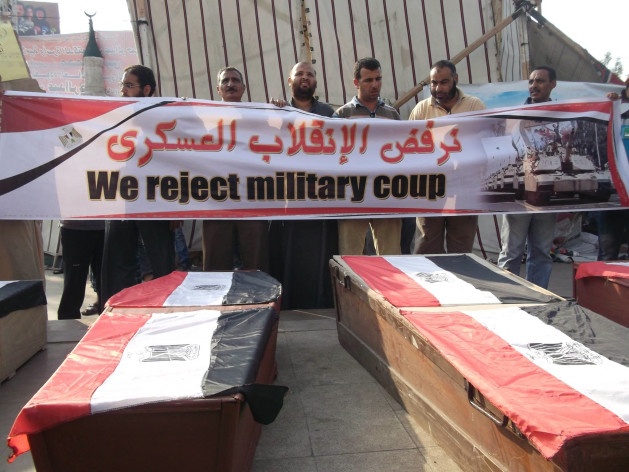 Despite the death of Muslim Brotherhood members, others from the group say they will continue to hold peaceful protests until Morsi is reinstated as president. Credit: Khaled Moussa al-Omrani/IPS.

CAIRO, Jul 18 2013 (IPS) - The ouster of Egypt’s first freely elected president by the military has led some to warn of a possible Algeria-style civil war. Local analysts, however, dismiss the likelihood of the “Algeria scenario” occurring in Egypt.

“For one, Egypt’s Islamist current is much less extremist than Algeria’s was when civil war erupted in that country,” Cairo-based political analyst Tawfiq Ghanem told IPS.

Numerous comparisons have been drawn with Algeria, where in 1992 the army took over after cancelling elections that Islamist parties were poised to win. The move triggered a decade of fierce civil war between various Islamist groups and the army-backed government, in which tens of thousands of people are thought to have been killed.

"Egypt's Islamist current is much less extremist than Algeria's was when civil war erupted in that country."

Ghanem, however, dismissed the possibility of such a scenario playing out in Egypt. “Egypt’s Islamist current, including both the Muslim Brotherhood and the allied Al-Gamaa Al-Islamiya (which formally renounced violence in 1997), are much more moderate in outlook than their Algerian counterparts were,” he said.

“What’s more, Egypt’s main Islamist factions are considerably more disciplined and have more control over their members than Algeria’s Islamic Salvation Front had at the time.”

The Algeria conflict brought numerous atrocities, including the gruesome mass murder of civilians in remote areas of the country – acts widely blamed at the time on breakaway militant Islamist factions. While the government had used such incidents to justify its oppressive policies, evidence later emerged suggesting possible government involvement in the crimes.

Ghanem did not rule out the possibility that “third parties” – not excluding foreign intelligence agencies – “might exploit the current tense situation in Egypt to stage terrorist acts in hopes driving the country towards more violence and chaos.”

Egypt’s remote Sinai Peninsula has witnessed almost daily attacks on army and police installations since Morsi’s ouster, in which at least 13 people have been killed (although reports emanating from Sinai remain difficult to confirm).

On Tuesday, Jul. 16, Israel – in line with the terms of the 1978 Camp David peace treaty – granted Egypt permission to deploy two additional infantry battalions to North Sinai with the ostensible aim of “combating terrorism”.

As a massive pro-Morsi sit-in in Cairo enters its third week and with more demonstrations planned for this Friday, the Muslim Brotherhood has reiterated its strategy of pursuing strictly peaceful means of protest.

“We will continue to resist this military coup with peaceful protests. We will not respond to any provocations,” the group said in a statement earlier this week. “We will escalate our resistance through peaceful pressure using all available means.”

Further heightening tensions, Egypt’s nebulous “Black Block” movement – a black-clad anti-Islamist group known for its readiness to adopt violent tactics – declared on Jul. 16 that it would forcibly disperse pro-Morsi rallies if security forces had failed to do so by the last day of Ramadan on Aug. 8.

According to Ghanem, whichever side ends up resorting to violence will lose the battle for public opinion. “Whoever is perceived as the aggressor will lose the sympathy of the Egyptian street – along with their short- to mid-term political future.”

Dozens have already been killed and hundreds injured since the controversial ouster of Mohamed Morsi, elected a year ago in Egypt’s first post-Mubarak presidential poll.

The clashes come amid massive pro-Morsi demonstrations, marches and sit-ins nationwide – some of them reportedly drawing hundreds of thousands – to demand the ousted president’s reinstatement.

The exact size of the rallies remains difficult to gauge due to a general media blackout on most pro-Morsi activity.

Following the army’s “removal” of Morsi, a host of Islamist leaders – especially those from the Muslim Brotherhood, the group from which Morsi hails – were rounded up by the authorities. The ousted president himself remains detained by the army at an undisclosed location.

Morsi’s opponents describe the Jun. 30 protests that led to his ouster as Egypt’s “second revolution,” reflective of the “popular will.” Morsi’s supporters see it as a military coup against a democratically elected president; a “counter-revolution” planned and executed largely by elements still loyal to the Mubarak-era ‘deep state’.

It is the second time since the January 2011 revolution that Egypt’s military has stepped in to reverse an Islamist electoral victory. Shortly before Morsi’s election, Egypt’s then-ruling Supreme Military Council dissolved the lower house of parliament – three-quarters of which was held by Islamist parties – based on a court ruling widely seen as politicised.

“First they dissolved the democratically elected lower house of parliament, then they mounted a military coup that kidnapped the elected president,” the Muslim Brotherhood declared in statement this week, “all without any reference to the people.”

On Jul. 16, Mansour appointed a government of “technocrats” drawn almost entirely from Egypt’s liberal opposition. Islamist parties and groups, meanwhile, led by the Brotherhood, refuse to engage in the army-backed political process, and insist Morsi is Egypt’s legitimate head of state.