WASHINGTON, Jul 18 2013 (IPS) - Samantha Power, U.S. President Barack Obama’s nominee for the post of ambassador to the United Nations, made a strong case for her confirmation Wednesday with strong pro-Israel and interventionist statements that will appeal to many of the hawks in the U.S. Senate. 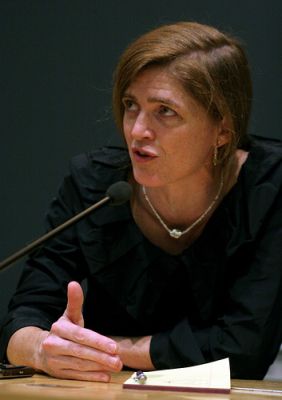 Speaking at her confirmation hearing before the Senate Foreign Relations Committee, Power called defending Israel at the United Nations her top priority.

Listing those priorities, Power said, “First, the U.N. must be fair… The United States has no greater friend in the world than the State of Israel. Israel is a country with whom we share security interests and, even more fundamentally, with whom we share core values – the values of democracy, human rights, and the rule of law.

“America has a special relationship with Israel. And yet the General Assembly and Human Rights Council continue to pass one-sided resolutions condemning Israel above all others…Israel’s legitimacy should be beyond dispute, and its security must be beyond doubt… I will stand up for Israel and work tirelessly to defend it.”

Power’s nomination was initially questioned by some observers, based on comments made over a decade ago which were deemed offensive to Israel.

In 2002, she suggested that if the conflict between Israel and the Palestinians, which at that time was at a high point of violence, continued to worsen, the United States should consider a large protection force, which she said may mean “alienating a domestic constituency of tremendous political and financial import,” a clear reference to the powerful pro-Israel lobby in the United States.

Its executive director, Matt Brooks, said that “Samantha Power has a record of statements that are very troubling to Americans who support Israel… She must respond to the strong doubts about her views raised by (her) record…The U.S. has an important role to play in the United Nations to defend freedom, Western values, and our democratic allies.

“We need an ambassador who will fight for U.S. interests in the international arena. Samantha Power must show the Senate and the American people that she can fill that role.”

The Zionist Organization of America went further, largely misrepresenting even her most controversial views by saying that, “Ms. Power’s record clearly shows that she is viscerally hostile to Israel, regards it as a major human rights abuser, even committing war crimes, and would like to see the weight of American military and financial power go to supporting the Palestinian Authority, not Israel. In contrast, she has spoken of Iran as though it scarcely poses a problem.”

But as early as 2008, with Obama in line for the presidency and recognising her own potential for a key role in his administration, Power disavowed her 2002 statements, and reached out to the heart of the pro-Israel lobby.

As described by Rabbi Shmuley Boteach, who shares with Mitt Romney the dubious distinction of being a failed 2012 Sheldon Adelson-financed Republican candidate, Power addressed a closed-door meeting of Jewish-American leaders and “…became deeply emotional and struggled to complete her presentation as she expressed how deeply such accusations (of her being anti-Israel) had affected her.”

Dershowitz expressed the belief that Power was well-positioned to defend Israel at the United Nations. “She’s a perfect choice. A perfect choice,” he said. “She has real credibility to expose the U.N.’s double standard on human rights. She also understands the principle of ‘the worst first’ – you go after the worst human rights abusers first.”

Power’s long-standing support of military intervention was reinforced by her statements about Syria at the hearings. Speaking about perceived failures of the United Nations, Power was also implicitly critical of Obama’s policy regarding the ongoing atrocities in that country.

“We see the failure of the U.N. Security Council to respond to the slaughter in Syria,” she said. “(It is) a disgrace that history will judge harshly.”

Obama has pursued a careful policy in Syria, condemning the violence of the regime of embattled President Bashar al-Assad, but consistently displaying reluctance to actively intervene in the conflict.

Power has long been identified as a “liberal interventionist”, denoting her liberal credentials along with her belief that military intervention is a preferable option in cases where there is a threat of atrocities being committed. She is widely credited with being a key force in pressing Obama into his intervention in Libya.

Former Senator Joseph Lieberman, a committed hawk who left the Democratic Party in his last years in the Senate over differences regarding foreign policy, offered strong support to Power, drawing a distinction between her views and those of the president who has nominated her.

“Generally speaking from her writings, Samantha is probably more personally interventionist as a matter of American foreign policy based on human rights than this administration has been,” Lieberman said.

Power also struck a friendly chord with the Senate by vowing to press for financial reform at the U.N., a cause that is embraced by many Democrats while being overwhelmingly popular among Republicans. “The U.N. must become more efficient and effective,” Power told the Committee.

“In these difficult budget times, when the American people are facing tough cuts and scrutinising every expense, the U.N. must do the same. This means eliminating waste and improving accounting and internal management…It means getting other countries to pay their fair share. And it means closing down those missions and programmes that no longer make sense.”

Power is also a well-known advocate for human rights. Much of her testimony was devoted to this cause.

“The U.N. Charter calls for all countries ‘to reaffirm faith in fundamental human rights and the dignity and worth of the human person.’ But fewer than half of the countries in the world are fully free. The Universal Declaration on Human Rights is universally hailed and yet only selectively heeded.”

Even this statement followed the general tone of her testimony, which was often critical of the U.N. and often characterised its best qualities as an extension of U.S. foreign policy.

This raises serious questions about whether the Obama administration’s commitment to multilateralism is waning or if this was simply a charm offensive toward a Congress that has become more and more hostile to the U.N.