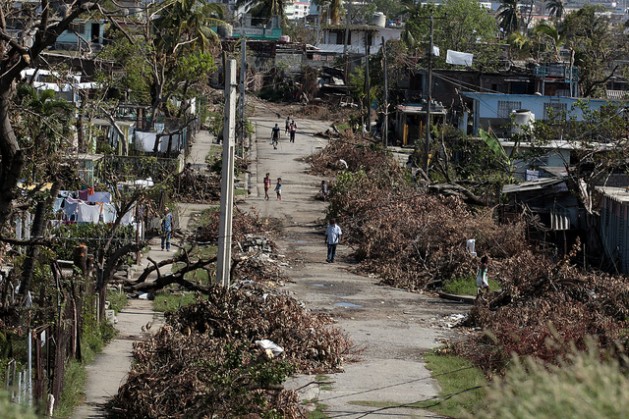 A street on the outskirts of Santiago de Cuba after Hurricane Sandy struck the city in October 2012. Credit: Jorge Luis Baños/IPS

HAVANA, Jul 10 2013 (IPS) - Rather than talk about forecasts for hurricanes at the start of this year’s season, Cuban meteorologist José Rubiera prefers to discuss the importance of reducing the country’s vulnerability and improving preparedness.

Experts at Cuba’s Meteorology Institute predict that in this year’s hurricane season – Jun. 1 to Nov. 30 – 17 tropical storms will form, including nine possible hurricanes, in the Atlantic hurricane region, which includes the North Atlantic, the Gulf of Mexico and the Caribbean Sea. And they say one of the big storms could hit Cuba.

At the start of his interview with IPS, the director of the Meteorology Institute’s forecast department clarifies that the Atlantic hurricane region is a very large area into which any city, such as Havana, fits millions of times, because “they are tiny dots on a map.” That means it is impossible to know ahead of time where a hurricane will hit.

“The prospect of an active season only means that the overall meteorological conditions …are conducive to more storms than in a normal year,” said Rubiera, who is also vice president of the hurricane committee of the Fourth Region of the World Meteorological Organization.

Q: The 2012 hurricane season was very active. After three calm years in Cuba, Sandy swept through the eastern region, wreaking havoc and taking many people in the area by surprise. Why?

A: There were many factors. In first place, only two hurricanes had passed through Santiago de Cuba, neither of them very intense, and they were moving from east to west: Ella in 1958 and Inez in 1966.

Sandy was the first storm to run from south to north across the province of Santiago de Cuba. The eye of the hurricane hit land early in the morning of Oct. 25, near Mar Verde beach, to the west of the city of Santiago.

Sandy’s eyewall (the ring of high winds surrounding the eye) crossed the city of Santiago de Cuba, which is in a mountainous area and has buildings with a high degree of concentration of population. And the city’s inhabitants do not have years of experience of what hurricanes are like.

Q: Did Sandy leave any lessons for Cuba?

A: I think so. Sandy’s lesson was that all hurricanes are dangerous and that the effects they can cause should never be underestimated. And also, that all big cities have to be prepared, because there are larger numbers of vulnerable people than in cases of isolated or smaller populations.

Education must be stepped up in parts of the country that don’t suffer these things frequently or with great intensity, to increase awareness of the risks.

Q: What conditions are favourable to this kind of intense, devastating hurricane?

A: I wouldn’t say it was very intense. By the time it reached Cuba it had already gone down to a category three storm. Yes, I would say it intensified quickly, but that’s not the same thing.

Only 17 hours passed from the time Sandy became a category one hurricane, just to the south of Jamaica, until it reached the coast of Santiago de Cuba. In that short period of time it escalated from category one to category three.

Why did that happen? Well, the conditions were extremely favourable for that to happen. The seawater temperature was extremely high, 31 degrees, and in the upper atmosphere the conditions favoured great atmospheric instability.

Q: Was that a new phenomenon?

A: With the last few hurricanes, in these first years of the 21st century, we have got used to cases of rapid intensification, like Wilma, which went from a category one to a category five hurricane in just 18 hours as it passed through the Caribbean in October 2005.

That is a manifestation of what we are experiencing in a time when the seawater temperature is rising and the conditions in the upper atmosphere are favourable to rapid intensification. These cases are now somewhat more frequent; it means something is changing.

Q: There seems to be a consensus that climate change is not causing more hurricanes, but that these storms will become more intense. What is your view on this?

A: Exactly. Although a hurricane is a phenomenon on a very small scale, compared to the models used to estimate climate change, there are certain elements that seem to indicate that the number will not grow, but will be the same or perhaps even smaller. But the intensity of these storm systems will increase, just as rainfall levels will get higher as we approach 2100.

That is the consensus of the Intergovernmental Panel on Climate Change (IPCC) and of experts on tropical storms who have discussed the issue. I agree with that appraisal.

Q: What challenges does climate change pose for meteorology?

A: Climate change poses challenges in many aspects. For meteorology, the biggest challenge is knowing with the greatest possible certainty what is going to happen. That is not currently possible. There is a factor of uncertainty, but it has its limits. For example, temperatures may rise one degree or they may rise up to four degrees.

That is, there are things that we are sure about. If greenhouse gases continue to be emitted, the temperature is going to rise, but how much? That is the factor of uncertainty, which depends to a large degree on the models we use to make predictions. That is one of the challenges, to be able to know to some degree what is going to happen in the future.

Q: How is the relationship between the meteorological services of Cuba and the United States?

A: Relations between the U.S. and Cuban specialists are very good. They have been here, we have been there. There is a very smooth exchange of information.

The Cuban government authorises their hurricane hunter aircraft to overfly our territory when the requests are made through diplomatic channels. There have never been problems in that sense.