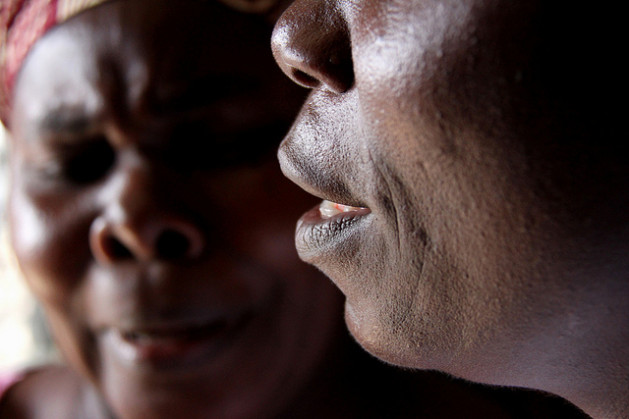 FGM is a taboo and complicated topic in Liberia and it is dangerous for women to speak out about it. Credit: Travis Lupick/IPS

Egypt is the highest-ranking country in terms of numbers, with 27.2 million women and girls, or 91 percent, having undergone the procedure. Despite being illegal, an overwhelming majority of FGM/C cases in Egypt are carried out by a medical professional.

In a number of countries, FGM/C is a near-universal practice. In Somalia, the rate is 98 percent, the highest percentage in the world, and in Guinea and Djibouti the rates are 96 percent and 93 percent respectively. The likelihood of a girl undergoing FGM/C is also higher if her mother has had it.

The younger generation of girls is less likely to undergo FGM/C and is more educated and aware of the negative health consequences of the procedure, which include complications during birth, infections and excessive bleeding, Claudia Cappa, author of the report and a UNICEF statistics and monitoring specialist, told IPS. These also include mental health problems, Cappa added.

“Girls can be seen as important agents of change across generations,” Cappa said.

The report contains the first published data from Iraq, which only started conducting a nationally representative survey on the practice in 2010, where prevalence of FGM/C has been reduced by half, Cappa said, adding that this is a positive development.

“These girls have also had the opportunity to interact with girls who have not been cut, and can see that they aren’t exposed to [social] stigma,” Cappa said.

The importance of including men in the fight against FGM/C was one of the key findings from the report, which reveals that many men and boys across the 29 countries investigated want to see an end to the practice.

The amount of hidden support, which includes the men and boys who oppose FGM/C, means that UNICEF has to put resources into bringing these attitudes to light, helping societies to shift towards complete abandonment of the practice.

Yet FGM/C continues, and there are large discrepancies between the attitudes of mothers, many of whom want the practice to stop, and their behaviour of allowing their daughters to have the procedure.

Reasons for continuing with FGM/C include cleanliness and hygiene, preservation of virginity and social acceptance, which is the most commonly reported factor. In some countries, increased sexual pleasure for men was also cited as a reason to keep the practice alive, the report says.

“It’s something that’s always there,” Francesca Moneti, senior adviser in child protection at UNICEF, said at the press conference. “The daughter reaches the age of cutting and she is cut.”

By conforming to the practice, girls gain social acceptance and have a “good conscience”, the report says.

Efua Dorkenoo, OBE, advocacy director of the FGM project at Equality Now, sees the need for more protection measures to be established in communities where FGM continues, as well as support systems for girls who flee their families and communities to escape the practice.

It’s also important for organisations, including UNICEF, to realise that a “multi-pronged approach” is necessary, involving health workers and authorities as well as focusing on behaviour change in the community, Dorkenoo says.

For Dorkneoo, FGM directly concerns violence against women and revolves around sexuality and social and gender control. And stopping a deeply entrenched cultural practice isn’t as easy as communities saying they’ve abandoned FGM.

“It is too simplistic that public declarations means FGM has stopped. It is more of a feel-good factor for a Western audience,” Dorkenoo says. “There isn’t a one-size-fits-all model.”

When communities make a declaration to stop it is significant, Cappa says, and that it’s often difficult to see if the practice has been fully abandoned due to the time between the declaration and subsequent data collection.

Dorkenoo says that while the UNICEF model of community education, which includes emphasis on democracy and human rights, is a good foundation and contributes to raising awareness about FGM, more needs to be done at a structural level.

“It’s very simplistic to think you can go into a community for 30 years, talk about human rights and democracy, and expect change,” she said, adding that FGM manifests itself in a complex way across each country.