BUENOS AIRES, Jul 30 2013 (IPS) - The progress made by Argentina in trials for crimes against humanity committed by the 1976-1983 dictatorship has been tarnished by a growing number of human rights violators escaping from prison.

Human rights organisations are concerned about the rise in the number of escapes from what they consider lax prison conditions.

The number grew from 35 to 40 escapes a year to 54 over the past year, Lorena Balardini, a researcher with the Centre for Legal and Social Studies (CELS), a leading human rights group, told IPS.

“The previous number was persistent and steady,” she said. “Some were captured while others escaped…But what caught our attention is that since 2012, the number of fugitives has jumped to 54.” 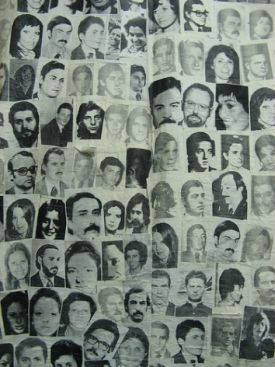 According to figures from the public prosecutor’s office, updated this month, 1,049 people are currently facing prosecution in trials for human rights abuses committed during the dictatorship, when up to 30,000 people were killed or disappeared in the country’s “dirty war”.

In addition, 471 have been tried for kidnapping, torture, forced disappearance, extrajudicial executions and other crimes against humanity. Of these, 426 were convicted and 45 acquitted.

Meanwhile, 853 are in custody, either convicted or awaiting trial. More than 60 percent of them are in common prisons, 36 percent are under house arrest, and the rest are in security forces installations or hospitals.

Balardini, head of research at CELS, said there is no clear explanation for the increase in escapes, although she suggested it could be related to “the flexible detention conditions” that some of the human rights violators enjoy, whether due to a decision by the courts or the prison authorities.

The latest case, which gave rise to suspicions of privileged treatment, was the escape of retired army major Jorge Olivera and retired army lieutenant Gustavo de Marchi on Jul. 25.

They were found guilty of human rights abuses Jul. 4 in the western province of San Juan. Olivera was sentenced to life in prison and de Marchi was given a 25-year sentenced.

Olivera and de Marchi had been transferred from the Marcos Paz prison in San Juan to the Cosme Argerich Central Military Hospital in the city of Buenos Aires, 1,300 km away, for appointments in dermatology, kinesthesiology and psychiatry.

The request for the transfer and medical appointments was filed by Olivera’s wife, Marta Ravasi, a psychologist in the military hospital. It was initially rejected by the court where the two men were tried. But another judge, Miguel Ángel Gálvez from San Juan, approved the request.

Shortly after they arrived at the hospital, the two men went missing. Interpol immediately issued an international notice for their arrest, and the justice ministry offered a reward of two million pesos (364,000 dollars) for information leading to their capture.

The government of centre-left President Cristina Fernández sacked military and prison personnel implicated in the escape, and charges were brought against Judge Gálvez.

To prevent future escapes, all transfers of people detained in connection with human rights cases were suspended. And on Jul. 29 the justice, defence and health ministries signed an agreement to review the medical condition of all of the detainees.

According to the agreement, the detainees will no longer be taken to military hospitals, but to the health centre that serves each prison.

In addition, government officials explained, every transfer of prisoners will be based on symptoms or health problems that have been duly certified, rather than on a simple request from the prisoner, as was the case up to now.

The justice ministry’s national programme for the coordinated search for people wanted for crimes against humanity currently has a list of 52 fugitives. Rewards are offered for their capture.

“The most difficult case is that of (Jorge) Vildoza,” said Balardini, referring to the former captain who was one of the heads of the Navy School of Mechanics (ESMA) in 1976 and 1977, when it was the dictatorship’s biggest clandestine centre for torture, killings and forced disappearance.

Vildoza and his wife Ana María Grimaldos moved to Switzerland in 1986, taking with them their illegally adopted son, who was born at ESMA in 1977. Two years later, the Argentine courts issued international warrants for their arrest for kidnapping the boy. But Vildoza was never captured.

In 1998, the boy, by then a young man, presented himself in court in Argentina and underwent DNA testing to verify his identity. He turned out to be Javier Penino Viñas, the son of Hugo Penino and Cecilia Viñas, victims of forced disappearance. Viñas was seven months pregnant when she was seized in 1977. She was last seen at ESMA.

Nevertheless, Javier continued to live with the couple who stole and raised him, until he married.

Grimaldos was arrested a year ago in Argentina, after entering the country on a false passport. She is currently under prosecution for theft of children. She claims her husband died, but the search for him continues.

Theft of the children of political prisoners was one of the crimes of the dictatorship. The babies, or in some cases toddlers, were illegally adopted, often by military families.

Balardini said the escapes from prison have been a problem since the start of the human rights trials in the mid-1980s, which were cut short by amnesty laws passed in 1986 and 1987 that were struck down in 2005, allowing the cases to be reopened.

CELS says the dictatorship’s human rights abusers have their own support networks and sources of financing that make it possible for them to obtain forged documents, hire lawyers, move from one country to another, and survive far beyond the reach of Argentina’s justice system.

The activist said the rewards offered by the government help put the issue on the table and increase its visibility.

But she said the special conditions that the prisoners enjoy, better than those of common criminals, make it easier for them to escape.

She said CELS has been “surprised” by cases of human rights violators who have already been living at large before they are captured, and who, despite requests by prosecutors and the victims’ lawyers, are granted bail by judges and later flee.

Olivera, who was let off the hook by the amnesty laws, was arrested in Italy in 2000 on a warrant from the French justice system. But he went free, thanks to false documents.

Finally, a warrant for him was issued in Argentina in 2007, and a year later he was arrested. But he escaped just three weeks after he was sentenced on Jul. 4.

Margarita Camus, a victim who testified in the trial against Olivera and de Marchi, said she was worried about the escapes. “We know what kind of people they are, how they move around in hiding, and it makes us nervous and uneasy.”

Balardini pointed out that escapes have also occurred in other parts of the country. But she said they only receive attention when they involve better-known figures like Oliveri and de Marchi.

In other cases, suspects have skipped bail. For example, retired army colonel Carlos Arroyo disappeared in May before the start of a trial against him and eight other human rights violators in Bahía Blanca, near the city of Buenos Aires.

At the time, the prosecutor’s unit in Bahía Blanca stated that “the need for all of those charged with crimes against humanity to be held in prison units has been repeated on innumerable occasions, given the concrete and real risk that they will flee since, as it has been seen, those who formed part of the terrorist state still today count on the connivance of different sectors of power who protect this kind of criminal.”

And in the northeastern province of Formosa, a trial against nine suspects charged with kidnapping 74 people is set to begin on Jul. 31. But the main defendant, Ángel Spada, a former army intelligence chief in an infantry battalion, skipped bail in June.