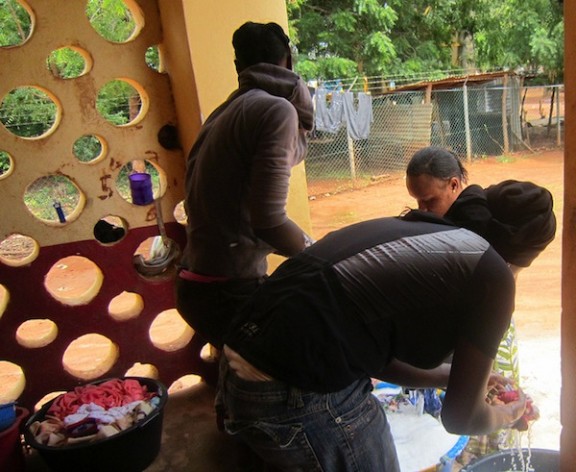 Child brides in rural Senegal at work. Marriage before the age of 18 is a generally common practice in Senegal. Credit: Issa Sikiti da Silva/IPS

A recently released report by Rachel Vogelstein, a fellow at the Women and Foreign Policy Program at the non-partisan think tank Council on Foreign Relations, highlights strategic and moral reasons for U.S. involvement in the issue.

“Child marriages are a form of gender-based violence,” said Vogelstein at a discussion on her study on Wednesday. “It curtails education for young girls, which in turn stifles their economic progress.”

According to the United Nations, in 2011 almost 70 million women—or one in three women between the ages of 20 and 24—had been married under the age of 18. In South Asia, 46 percent of women aged 20 to 24 were married before 18 and 18 percent were married by age 15. India accounts for 40 percent of all child marriages worldwide.

“This is often just seen as the norm in many countries. That’s just how life has been,” Lakshmi Sundaram, global coordinator of a London-based advocacy group, Girls Not Brides, told IPS.

"Marrying your daughter off means you have one less mouth to feed."
-- Lakshmi Sundaram

He pointed to economic reasons for early marriages, noting, “In most countries there are dowry systems in place, and marrying your daughter off means you have one less mouth to feed.”

The majority of the 25 countries with the highest child marriage rates have fragile governments or face a high risk of natural disaster, such as Syria, Afghanistan and Niger. In Syrian refugee camps, there is evidence that girls are married off at a very young age.

“Marriage is viewed almost as a form of security,” Sundaram told IPS. “In places where there is insecurity or conflict, parents may actually feel the best thing they can do for their daughter is marry her off because they believe she will be safe.”

In actuality, the opposite is true. Girls married as teenagers in India reported three times as many incidences of rape than girls married as adults. Ninety-five percent of those girls did not know their husbands prior to marriage and 81 percent said their first sexual experience was forced, Vogelstein said during Wednesday’s talk.

According to the study, brides aged 15 to 19 are twice as likely to die from pregnancy or childbirth than brides in their twenties, while the baby of a teenage bride is 60 percent more likely to die in its first year than the child of a mother in her twenties.

“The marriages often have very strong power dynamics, which are controlled usually by the much older husbands,” Sundaram told IPS. “The girls are under huge pressure to prove their fertility, so they often become pregnant very young and very often.”

All but four countries have a minimum age of legal marriage, ranging from 15 to 18. Several countries have a provision allowing younger children to be married with the consent of the parent.

According to the director of gender, population and development at the International Centre for Research on Women, Suzanne Petroni, such a provision makes preventing child marriage a difficult task.

“In the majority of these countries, you can get the consent of parents. They are the ones making the decision to have the daughter married off,” Petroni told IPS. “In most cases, it is not her decision at all.”

According to the study, in several countries the implementation of child marriage laws are violently resisted, leading several advocacy groups to suggest trying to change the culture of these societies rather than changing laws. Because many countries do not have a birth or marriage registrar set up, proving a girl is too young to be married, or is even married at all, is a challenge.

According to the study, eliminating child marriages offers economic and developmental benefits to both individual countries and the United States.

“The United States spends billions of dollars to reduce maternal child mortality, prevent the transmission of HIV, improve education attainment, stimulate economic growth, and promote the rule of law, and has vital interest in the stability of many countries where child marriage is pervasive,” stated the study.

The study called for the U.S. government to acknowledge that child marriage is a barrier to security and to encourage the efforts of other countries to tackle this issue internally.

“The U.S. government had adopted a recognition that reducing gaps that exist between men and women, and empowering women to lead, [are] the central core to effective development,” said Caren Grown, the senior coordinator of gender equality and women’s empowerment at the governmental organisation United States Agency for International Development (USAID).

“We can’t achieve our other economic goals, whether it’s food security or a peaceful society, without understanding the harmful inequalities that disadvantage women. Child marriage is one of them.”