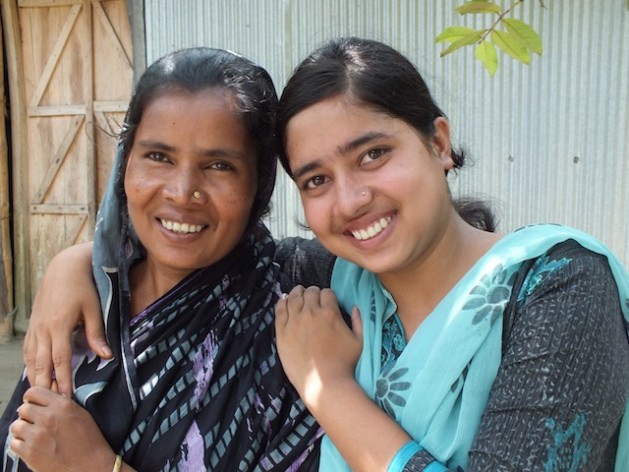 Shirin Aktar, a young girl who resisted child marriage, poses with her mother outside their home in northern Bangladesh. Credit: Naimul Haq/IPS

RANGPUR, Bangladesh, Jul 5 2013 (IPS) - Shirin Aktar was just 13 years old when her parents decided it was time for her to get married.

The eldest girl in a poor, conservative family hailing from the Rangpur district in northern Bangladesh, Shirin had few opportunities open to her: with no formal education or job prospects, marrying her 31-year-old cousin seemed her best bet to avoid a life of abject poverty.

The soft-spoken girl told IPS her parents never consulted her about their decision. Her father lacked a steady job, and the family had no home to call their own. Accepting the proposal of a relatively well-off businessman seemed to them the obvious choice for their daughter.

Unbeknownst to her family, Shirin had other plans. Determined to fulfil her dream of studying and going to college, the girl enlisted the help of her fellow members of ‘Child Journalists’, a group of local boys and girls who “oppose social injustice and raise awareness on children’s rights,” she said.

Sitting in her home in the village of Arajemon, located some 370 km northwest of the capital Dhaka, Shirin, who just turned 18, confessed that she had seen one too many female friends and relatives suffer dearly as a result of early marriage, experiencing everything from domestic violence at the hands of in-laws, to heavy loads of housework.

Shirin knew she could not go down the same path.

But standing up to her parents was not easy – it required courage, and massive peer support.

Reza, leader of Child Journalists, told IPS that despite being cognisant of the “consequences of meddling in adults’ affairs, we felt Shirin’s parents were doing her an injustice – we had to resist.”

Still, this near unanimous support among community members would not have gone far without a boost from the Kishori Abhijan, or the Adolescent Empowerment project, an initiative of the United Nations Children’s Fund (UNICEF) in Bangladesh that works to equip young girls with the tools they need to make their own life choices.

First piloted in 2001, the programme arose in response to the staggering number of child marriages in this South Asian country of 150 million people. Over half a decade later, the need for such a service is – sadly – greater than ever.

With roughly one-third of the population living on less than a dollar a day, it is small wonder that families turn to marriage as a means of social mobility and an escape from a life of gruelling labour: finding a husband for a daughter means one less mouth to feed and the possibility of financial supplements from the spouse.

Despite progress in girls’ school enrolment rates, a substantial decline in fertility rates and greater freedom for young women to demand their rights, many still find their lives constrained by the custom of child marriage: according to recent research, 68 percent of women aged 20–24 were married before reaching the legal minimum age of 18, while other studies indicate that a vast majority of these girls were actually married off before their 16th birthday.

Government data suggests that over 50 percent of the estimated 13.7 million adolescent girls in Bangladesh will be mothers by the age of 19.

In rural Bangladesh, where poverty is even more widespread than it is in the cities, girls from poor families are considered eligible for marriage at the onset of puberty – meaning children as young as 13 and 14 years old often become wives.

Partly in an effort to bargain down dowry prices, partly to “protect” their children against sexual harassment, impoverished families seldom think twice before handing their girls off to husbands who are often much older.

Child rights activists say the practice is not only socially damaging but also hazardous to girls’ health: in a country where 80 percent of all births happen in the home without a skilled medical attendant present, young mothers and their children are vulnerable to complications during pregnancy and a range of associated conditions such as pneumonia and low birth weight.

Now, a major push by locals together with international organisations seems to be bearing fruit.

Self-help groups known as ‘kishori clubs’ bring together about 30 peers every fortnight to discuss everything from reproductive health and nutrition to gender roles and violence against women.

Group leaders trained by UNICEF help facilitate the acquisition of life skills such as stitching, pottery making, or learning how to rear poultry, which improve young women’s chances of securing a livelihood.

Kishori clubs work with affiliated grassroots organisations like the Centre for Mass Education in Science (CMES), which operate in hundreds of sub-districts around the country and have proven invaluable in providing basic training in computer literacy and carpentry, among others.

The youth collectives also act as coordinating bodies for awareness campaigns that include spreading information about child marriage among their peers and throughout the broader community.

Shirin’s story is a testament to the power of these local groups: when her father first approached the local marriage registrar, he refused to register the union before first checking the girl’s birth certificate, signaling a turning point from the days when officials would not blink an eye at the sight of a teenaged bride.

But advocates are aware that education alone will not change the mindset that perpetuates this practice. In order to put a complete cap on child marriage, it will be necessary to change the economic circumstances of impoverished families.

Rose-Anne Papavero, UNICEF chief of child protection in Bangladesh, told IPS that the agency is working with the government to “provide conditional cash transfers (of 472 dollars per year) to poor families… if they agree not to marry off their (underage) daughters, not to use child labour, and not to practice corporal punishment.”

The positive impacts are evident: the 2007 Bangladesh Demographic and Health Survey (BDHS) reported that there has been a slow but steady increase over the past 25 years in the average marriage age, from 14 years for women in their late 40s to 16.4 years for those in their early 20s.