KARACHI, Pakistan, Apr 12 2012 (IPS) - It was personal experience that turned Gul Bano and her cleric husband, Ahmed Khan, into ambassadors against early marriage and its worst corollary – obstetric fistula which allows excretory matter to flow out through the birth canal. 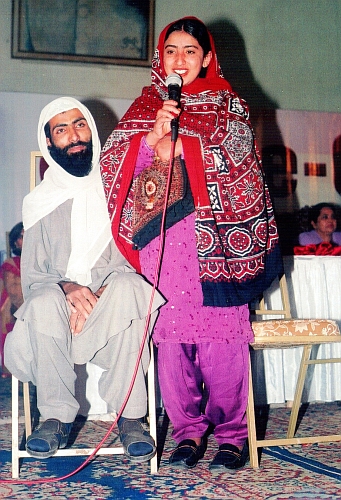 As is the custom in the remote mountain village of Kohadast in the Khuzdar district of Balochistan province, Bano was married off as soon as she reached adolescence, at 15, and was pregnant the following year.

There being no healthcare facility near Kohadast, Bano did not receive antenatal care and no one thought there would be complications. But, events were to prove different.

After an extended labour lasting three days, Bano delivered a dead baby. “I never saw the colour of my son’s eyes or his hair. I never held him once to my bosom,” recalls Bano, now 20.

Her troubles had only begun. A week later, Bano realised she was always wet with urine and reeking of faecal matter. “I was passing urine and stools together.”

Unable to handle the prolonged labour, Bano’s young body had developed a fistula caused by the baby’s head pressing hard against the lining of the birth canal and tearing into the walls of her rectum and the bladder.

Bano’s family attributed her condition to fate, her father refusing to visit “due to the bad odour coming from me.” However, through those trying times, Khan stood by his young wife and sought medical help.

After Bano spent a year in a perpetually “wet and stinky” condition, her husband finally discovered a hospital in Karachi specialising in treating fistula and other conditions related to reproductive health.

Koohi Goth Women’s Hospital, where fistula victims are treated free, was started by Dr. Shershah Syed, one of Pakistan’s first gynaecologists to train in repairing a painful and socially embarrassing condition.

In addition to incontinence, the medical consequences of fistula include frequent bladder infections, painful genital ulcerations, infertility and kidney failure.

In 2006, the United Nations Population Fund (UNFPA) launched a four-year fistula repair project as part of a programme to improve maternal health.

According to UNFPA, at least two million women in the world live as Bano did – in shame and misery. Most are not even aware that fistula can be repaired.

A major challenge for healthcare professionals is that the number of women suffering from fistula in the world is increasing by about 75,000 cases annually.

In Pakistan the true prevalence of fistula is unknown, but Syed estimates that there are about 5,000 new cases every year.

With only 500 – 600 women undergoing corrective surgery annually, Pakistan needs to put more resources into addressing fistula – which falls under the Millennium Development Goal (MDG) of reducing maternal mortality by three-quarters by 2015.

The MDGs are eight United Nations targets to be met by 2015 and, according to studies published by the International Youth Council, a major civil society organisation, Pakistan is unlikely to meet the fifth that deals with maternal health.

Pakistan’s maternal mortality ratio is wide-ranging, from 286 per 100,000 births in Karachi’s urban areas to 756 in rural Balochistan, where child marriages are compounded by non-existent health services.

“For both physiological and social reasons, mothers aged 15-19 are twice as likely to die of childbirth than those in their 20s,” says a UNFPA document. “Obstructed labour is especially common among young, physically immature women giving birth for the first time.”

Obstetric fistula is now generally acknowledged to be another burden on the girl child, deprived of basic education and forced into marriage – for which she is neither physically nor mentally prepared.

Pakistan’s Child Marriages Restraint Act passed in 1929 permits girls to be married at 16, but poverty, illiteracy and socio-cultural practices result in girls being married off as soon as they reach puberty.

Syed’s team continues to hold fistula repair camps in the remote areas of Pakistan that include training programmes for doctors and paramedics in fistula management. “The complicated cases come to Koohi Goth and simple repair is done in the field hospitals.”

The camps provided an opportunity to reach out to affected women and their families and encourage them to avail themselves of the free treatment in Karachi, where necessary.

Getting Bano to Karachi was not easy. Khan gathered a group of able-bodied men who took turns carrying her on a rope bed for three days just to reach a motorable road.

“It’s been almost three years and she has gone through six operations,” says Dr. Sajjad Ahmed, who worked at Koohi Goth as manager of UNFPA’s fistula project from June 2006 to February 2010. “She would not speak at all and she did not understand Urdu.”

Today Bano and Khan are regular visitors at Koohi Goth and vocal advocates of the campaign against fistula. They travel across Pakistan, spreading the word about how to prevent the injury and what to do about it.

“Khan is a cleric and yet he does not conform to the stereotype of a religious person,” said Syed. “He tells parents that fistula can be avoided if they stop marrying off their daughters at a very early age.”

Bano shares her story and tells married women about the importance of birth spacing, antenatal checkups and timely access to emergency obstetric care.

Syed says Pakistan badly needs a mass awareness campaign on fistula prevention and stresses the importance of social support for victims. “That’s the only way we can eradicate fistula from this region.”

“I smell nice now and it’s all because my husband wanted me to get well,” said Bano, who may have spent many more years in a miserable state if not for the treatment at Koohi Goth.