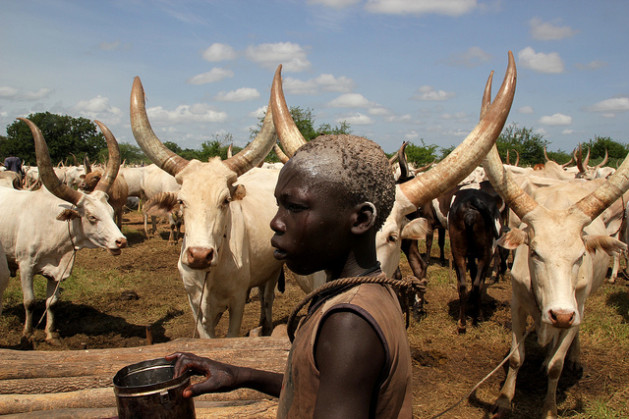 A member of the Mundari tribe stands amongst cattle in Terekeka, South Sudan. Many South Sudanese communities see child marriage as an important way for families to access wealth via the traditional practice of transferring cattle, money, and other gifts through the payment of dowries. Credit: Jared Ferrie/IPS

NAIROBI , Jun 13 2013 (IPS) - Akech B. loved to study and dreamed of becoming a nurse. But when she was 14, her uncle who was raising her forced her to leave school to marry a man Akech described as old and gray-haired. The man paid 75 cows as dowry for Akech. He was already married to another woman with whom he had several children.

She tried to resist the marriage, still hoping to pursue her dream of nursing. But her uncle told her:  “Girls are born so that people can eat. All I want is to get my dowry.” Her male cousins beat her severely and forced her to go with them to the man’s house.

But Akech fled and hid with a friend. Her uncle found her and took her to prison, where he told officials she had run away from her husband and needed to be taught a lesson. They imprisoned her for a night. When her cousins came for her they beat her so badly that she could hardly walk. Then they took her back to her husband. After that, Akech felt that she had no choice but to stay.

I heard stories like Akech’s over and over again from women and girls whom I interviewed between March and October 2012 in South Sudan, where child marriage is a problem of epidemic proportions.

Almost half of all girls between 15 and 19 in South Sudan are married, according to a government study. Some are as young as 12 when they are married. Girls who try to resist forced marriages may suffer brutal consequences at the hands of their families.

In cases documented by Human Rights Watch, girls were cruelly beaten, verbally abused, and threatened with curses, or taken to the police to coerce them into marriage. In some cases, they were held captive and even murdered by their families.

Many South Sudanese communities see child marriage as being in the best interests of girls and their families. It is seen as an important way for families to access wealth via the traditional practice of transferring cattle, money, and other gifts through the payment of dowries. It is also viewed as a way to protect girls from pre-marital sex and unwanted pregnancy. For some girls, marriage may also be the only way to escape poverty or violence in the home.

But the reality is far from this. Girls who marry young are removed from school, denying them the education needed to provide for themselves and their families.

Child marriage also creates an environment that increases married girls’ vulnerability to physical, sexual, psychological, and economic abuse. This is because early marriage limits their knowledge and skills, resources, social support networks, and autonomy, leaving girls with little power in relation to their husband or his family.

There is increasing acknowledgement of child marriage as a serious human rights problem in South Sudan. The government has taken some steps to tackle child marriage by enacting national laws that have important protections for girls and women on marriage.

There are also efforts to improve girls’ access to education such as through an alternative education system that allows pregnant girls and mothers and individuals who have not had access to formal education, or who have dropped out, to continue school.

However, these measures are insufficient, and are often stymied by a range of problems and limitations. There are gaps and conflicts in the laws designed to protect women and girls from child and forced marriage.

Poor understanding of the provisions of these laws, which is exacerbated by lack of adequate training, poor coordination amongst government ministries responsible for protecting children from abuse, and lack of a clear delegation of responsibilities to specific authorities, perpetuates child marriages and violence against girls who resist them. It also undermines accountability.

There are a number of small ongoing initiatives implemented or funded by local and international organisations, donors, and the government that address aspects of child marriage. However, these efforts are sporadic, uncoordinated, and limited in scope.

As a result of these failures and inadequacies, many women and girls continue to struggle with the often devastating and long-lasting consequences of child marriage.

As South Sudan marks the Day of the African Child on Jun. 16 with the rest of the continent, it should take immediate and long-term steps to protect girls from this harmful practice and ensure the fulfillment of their human rights.

Only a comprehensive approach, which should be set out in a national action plan, will help ensure meaningful progress by the government, its agencies, and development partners in ending child marriage. Such an approach should include legal reforms and programmatic initiatives that address the causes and consequences of child marriage, as well as protection for girls and women who seek redress through the justice system.

It is important for South Sudan to take these measures because child marriage constrains the social, educational, health, security, and economic progress of women and girls, their families, and their communities. Failure to combat child marriage is likely to have serious implications for the future development of South Sudan.