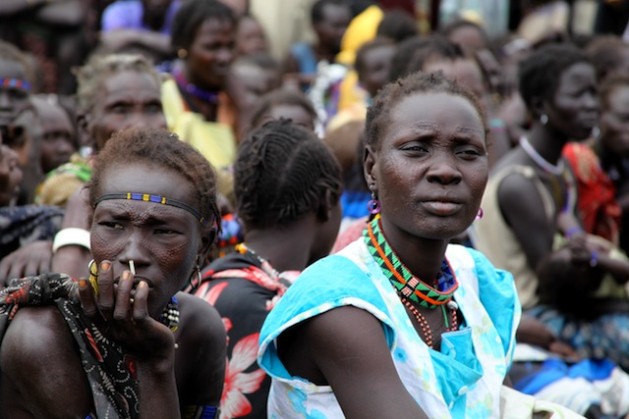 Women of the Murle ethnic group in South Sudan. The practice of child marriage is still supported in many South Sudanese communities, where girls are seen as a source of wealth because of the bride price families are paid. Credit: Jared Ferrie/IPS

JUBA, May 24 2013 (IPS) - “Our daughters are our only source of wealth. Where else do you expect me to get cows from?” asks 60-year-old Jacob Deng from South Sudan’s Jonglei state.

Deng’s attitude is a widespread one here as the practice of child marriage is still supported in many South Sudanese communities, where girls are seen as a source of wealth because of the bride price families are paid.

According to the Ministry of Gender and Child Affairs, 48 percent of South Sudanese girls between the ages of 15 and 19 are married, with some being as young as 12 years old when they are married off.

South Sudan’s Child Act 2008 sets the minimum age of marriage at 18, and says that anyone contravening this law faces up to seven years in prison. However, Minister of Gender and Child Affairs Agnes Kwaje Losuba admitted that it is not enforced.

Child marriage is part of the traditions of many communities. “Once a girl reaches puberty she is already a woman. As long as there is someone willing to pay many cows (for her), I will marry off my daughter,” Deng tells IPS.

“Early marriage, violence against women and many other things at the grassroots that women are suffering from are because of customary law. So we need to do something about it." -- Angelina Daniel Seeka

Fifty-year-old Biel Gatmai from Upper Nile state tells IPS that he supports child marriage because he fears his daughters will fall pregnant out of wedlock – something that is abhorred by local cultures here.

“It is better for a girl to get married at a young age than to keep her in her parents’ house and she falls pregnant. If her first child is born out of wedlock, whoever marries her later will pay only a few cows,” Gatmai says.

As South Sudan goes through a constitutional review process, which includes the hosting of seminars and workshops across the country to obtain input from citizens on the new constitution, the issue of child marriage is something that has been frequently discussed.

President Salva Kiir appointed a 55-member Constitutional Review Commission in 2012 to assess and improve on the country’s current transitional constitution, which was adopted on Jul. 9, 2011, the day South Sudan became an independent nation.

The commission is expected to submit the draft for a new constitution by December 2014.

According to the United Nations, women and girls in South Sudan remain particularly vulnerable. After a civil war with Sudan that lasted 21 years, they have been the victims of the worst human rights abuses, including rape and abduction. An estimated two million people were killed and four million displaced before a 2005 treaty ended the conflict by splitting Sudan in two.

In mid-April the U.N. Mission in South Sudan (UNMISS) said it was concerned about the role of women in the country given the continuing inter-communal violence that regularly threatens civilians, especially women and children. At least 1,600 people died in 2011 in fighting between the Murle and Lou Nuer ethnic groups, according to the U.N. 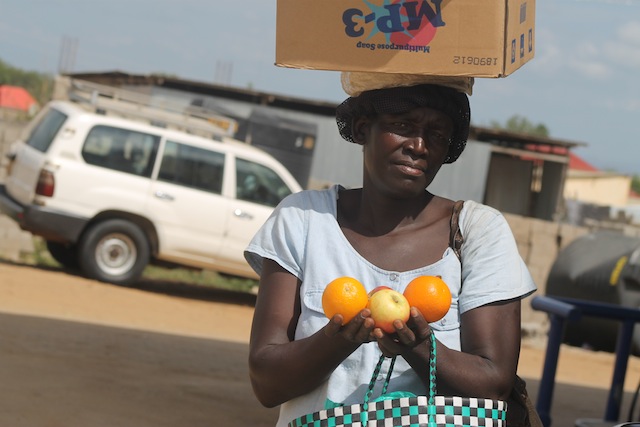 In April, the head of UNMISS, Hilde Johnson, told reporters in Juba that the U.N. was dedicated to enforcing the rights of women, children and the elderly who were “particularly vulnerable and need protection.”

Paleki Mathew Obur, director of the local NGO South Sudan Women’s Empowerment Network, says they want the issue of a minimum marriageable age addressed in the new constitution, as it is not defined in the current transitional one.

“Different organisations have gone to (Sudan’s various) states and have gathered different recommendations for the minimum age of marriage. Some people are saying that it should be 18 and others are saying 25 years should be the minimum age,” she tells IPS.

Angelina Daniel Seeka, from the local NGO End Impunity, tells IPS that the root cause of child marriage lies within customary law.

“Early marriage, violence against women and many other things at the grassroots that women are suffering from are because of customary law. So we need to do something about it. I hope we will come up with something that can help women in the future,” she says.

Activists say that the unwritten nature of customary law here serves as an opportunity for local chiefs – who are almost all men – to interpret the law in any way they want.

According to Lorna James Elia, head of the women’s organisation Voice for Change, the new constitution should redefine customary law.

“What we are saying is that there are areas in customary law that are very good and we can retain them. But those aspects that are very discriminative, whether they are cherished by women or cherished by men, should be dealt away with,” she tells IPS.

But the practice remains contentious, as many instances of customary law here are considered unjust. For example, under customary law if a person commits murder their family compensates the bereaved family by giving them a young female relative.

“We want the constitution to include a clause making it clear that no human being is to be used to compensate the family of a murdered person. There should be no child compensation,” rights activist Buruna Ciricio said at a recent U.N.-backed national women’s conference on constitutional development in Juba.

Customary law also forces a widow to be “given” to a brother or relative of her late husband. She is not eligible to inherit her husband’s land or property, and her “new husband” will inherit in her stead and is expected to take care of her.

Once the new constitution is finally drafted, it is expected to be debated in parliament in early 2015, before it is signed into law.