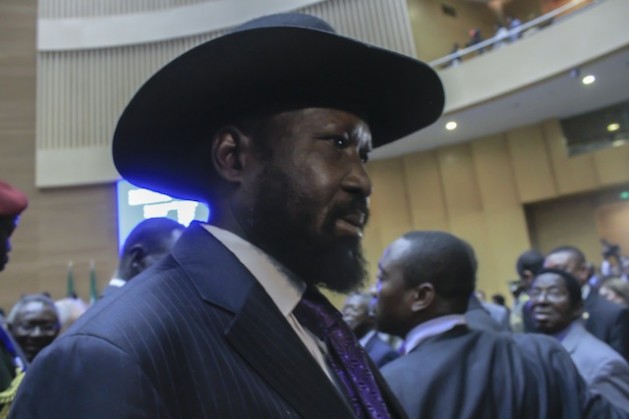 President Salva Kirr of South Sudan at the sidelines of the African Union summit, which was held in Addis Ababa from Jan. 27 to 28. Credit: Elias Asmare/IPS

ADDIS ABABA , Jan 29 2013 (IPS) - The African Union summit failed to provide a breakthrough in the ongoing negotiations between Sudan and South Sudan when it ended on Monday Jan. 28.

President Salva Kirr of South Sudan and Sudanese President Omar al-Bashir met on the sidelines of the summit, which was held in Addis Ababa from Jan. 27 to 28, to discuss the implementation of agreements the two countries signed in September 2012.

On Jan. 25 Kirr called for the immediate implementation of the deals after the bilateral meeting, telling journalists at the AU headquarters that the two countries should “shift from rhetoric to action.”

Kirr and Al-Bashir signed nine agreements on Sep. 27, 2012, following the continued fighting between the two countries along their borders, disputes over oil fees and claims over oil-rich border states, including the Abyei region.

At the time, the United Nations Security Council threatened both countries with sanctions if no agreement was reached.

But the agreements are yet to be put into effect, as there is no implementation deadline.

Independent East Africa peace and security analyst Mehari Taddele Maru told IPS that U.N. sanctions might be helpful if the countries fail to implement the agreements. He said “sanctions have to be considered again, but then they should be well targeted so that (the sanctions) pressure officials and do not only effect the general public.”

However, AU Peace and Security Council (AUPSC) commissioner Ramtane Lamamra told IPS that sanctions are not needed: “I believe there is a clear expectation that failure should not be an option and patience is also part of the entire exercise.”

Chairperson of the AU Commission Nkosazana Dlamini-Zuma told delegations from both countries that the South Sudanese/Sudanese conflict poses a set of challenges on “how to celebrate diversity while pursuing the goal of a united Africa.”

Negotiations between the two countries seem to be continuing indefinitely as the AUPSC extended the mandate of the mediation team, led by former South African President Thabo Mbeki, till the end of July.

Mehari said that this was an issue for concern: “Every meeting comes with new conditions, new requests and even new documents that are tabled. The previous agreements are almost forgotten.”

South Sudan blamed its neighbour for the delay in implementing previous security agreements, which include implementing a buffer zone between the two nations, claiming that Sudan allegedly made new demands during the recent high-level security meeting.

Mehari said that the ongoing negotiation process was used as an excuse to not focus on democratisation and delivering basic services to the citizens of both countries. He said that Sudan’s Al-Bashir could use the ongoing border conflict for his own political gain, and could claim that he is the only leader who can stand against the threat of South Sudan and the international community.

Mehari added that the border issues were also used by the Sudan People’s Liberation Army, the leading political group in South Sudan, to shift the focus from their lack of delivery of services to their people as they are still trying to transform from a liberation movement into a democratic political party.

African civil society groups at the summit urged the AU to act on the worsening humanitarian situation in places such as disputed border states of Southern Kordofan and Blue Nile. Both countries are engaged in armed conflict in civilian areas in both states. In 2012 Human Rights Watch accused the Sudanese government forces of being in violation of international humanitarian law.

Abozer Mohamed of the Sudanese NGO National Group for Human Rights, which has consultative status to the U.N., said that the current agreements between the governments are not about the people, but only about politics. He said that strategies between the two countries should be more about capacity building. “When you hear the politicians speak you will think a war will begin tomorrow between the two countries. That should be changed,” Mohamed told IPS.

Delegations from Sudan and South Sudan are expected to return to Ethiopia in February to continue negotiations on implementing existing agreements.

Oil-rich South Sudan shut down its oil production in January 2012 over disagreements about transport fees with Sudan. Oil revenues are essential to both economies and production is yet to resume.