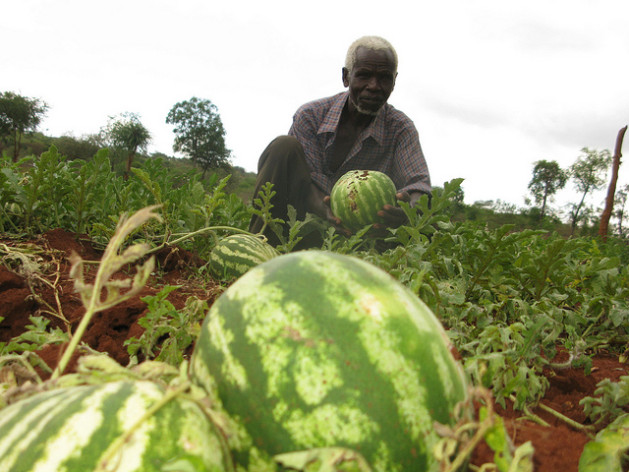 Many farmers will be forced to adapt to a changing climate. Geoffrey Ndung’u, from Kanyonga village in semi-arid Eastern Kenya, earns a living growing watermelons on his dry land. Credit: Isaiah Esipisu/IPS

WASHINGTON, Aug 21 2013 (IPS) - Agriculture as it exists today developed over 11,000 years of rather remarkable climate stability. It has evolved to maximize production within that climate system. Now, suddenly, the climate is changing. With each passing year, the agricultural system is becoming more out of sync with the climate system.

In generations past, when there was an extreme weather event, such as a monsoon failure in India, a severe drought in Russia, or an intense heat wave in the U.S. Corn Belt, we knew that things would shortly return to normal. But today there is no ‘normal’ to return to. The earth’s climate is now in a constant state of flux, making it both unreliable and unpredictable.

Since 1970, the earth’s average temperature has risen more than one degree Fahrenheit. If we continue with business as usual, burning ever more oil, coal, and natural gas, it is projected to rise some 11 degrees Fahrenheit (six degrees Celsius) by the end of this century. The rise will be uneven. It will be much greater in the higher latitudes than in the equatorial regions, greater over land than over oceans, and greater in continental interiors than in coastal regions.

The earth’s rising temperature also affects crop yields indirectly via the melting of mountain glaciers. As the larger glaciers shrink and the smaller ones disappear, the ice melt that sustains rivers, and the irrigation systems dependent on them, will diminish. The continuing loss of mountain glaciers and the resulting reduced meltwater runoff could create unprecedented water shortages and political instability in some of the world’s more densely populated countries.

Scientists also expect higher temperatures to bring more drought – witness the dramatic increase in the land area affected by drought in recent decades. A team of scientists at the National Centre for Atmospheric Research in the United States reported that the earth’s land area experiencing very dry conditions expanded from well below 20 percent from the 1950s to the 1970s to closer to 25 percent in recent years.

As the earth’s temperature rises, scientists expect heat waves to be both more frequent and more intense. Stated otherwise, crop-shrinking heat waves will now become part of the agricultural landscape. Among other things, this means that the world should increase its carryover stocks of grain to provide adequate food security.