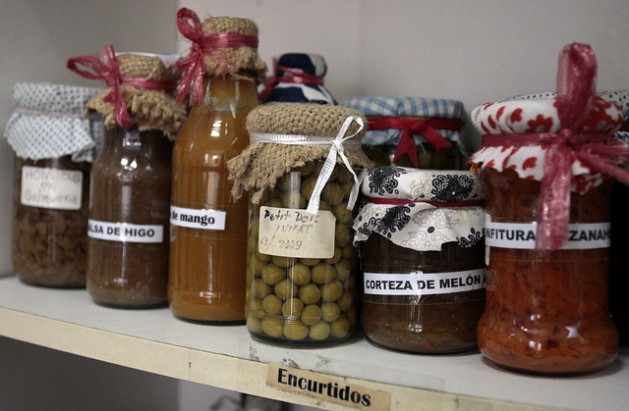 HAVANA, Aug 19 2013 (IPS) - Vilda Figueroa and her husband, José Lama, live in Marianao on the outskirts of Havana, where they share hundreds of recipes based on Cuban-grown foods and sun-drying, along with other ecological food preservation methods.

“We figured that there were lots of easy ways to preserve vegetables and condiments for when they were out of season,” said Lama, who, along with his wife, began searching for these types of alternatives in 1996. “That’s why we began experimenting with the principle of not adding anything artificial,” he told IPS.

Better known as the “Vilda and Pepe project”, this experience aims to provide training for producers with small gardens and the public in general in using sustainable, natural, low-input food-processing technologies, with the goal of promoting a healthy lifestyle based on strong social participation.

Through the publication of dozens of articles and pamphlets, and by means of national and international talks and workshops, this couple and the project’s network of volunteer promoters share recipes and preservation methods to make better use of the variety of root and green vegetables and aromatic plants that are grown in Cuba.

“We want this knowledge to reach the entire country, including producers and vendors, as a contribution to agriculture and family budgets,” Lama said.

This initiative, based in the municipality of Marianao, is linked to the urban and suburban agriculture network of small farms and gardens, a programme coordinated by the state Alejandro de Humboldt Institute of Basic Research in Tropical Agriculture.

Figueroa and Lama are working on one of the least-addressed aspects of food security and food sovereignty. Their recipes, based on endemic foods, seek to transform the nutritional habits of the local population by including new foods that are more sustainable and that are based on the island’s agricultural production.

Their natural food preservation techniques, including sun-drying and pickling, demonstrate to families and diverse producers many ways of using vegetables, aromatic plants, and tubers, instead of throwing them out.

The Economic Commission for Latin America and the Caribbean (ECLAC) reported that in the second half of 2012, the region was affected by higher global food prices, which drove up prices for local consumers.

However, the Updated Economic Overview of Latin America and the Caribbean 2012, published by ECLAC in April, predicted a drop in food prices for this year.

In the case of Cuba, the high percentage of income that families spend on food will drop if the country manages to boost agricultural production – one of the main challenges for the reforms implemented by the Raúl Castro government since 2008, with the goal of reducing imports.

The PCCA is using different channels to make people aware of how to sterilise containers for pickling; how to sun-dry oregano, basil, marjoram, rosemary, parsley and celery; and how to preserve fruits and vegetables, to conserve the nutritional value.

At their locale, they have an exhibition of dozens of multicoloured bottles of preserves, books, CDs and tapes of radio and television programmes. They also have a website, a classroom, a vertical garden, and their own publishing house for getting the word out.

The two activists have written a total of 22 books. Two of them, “Cocina cubana con sabor” (Cuban Cooking with Flavour), featuring 760 recipes, and “Manual de conservación de alimentos y condimentos por secado solar” (Manual for Preserving Foods and Condiments with Sun-Drying) received Best in the World prizes for their 2010 and 2011 editions in the Gourmand World Cookbook Awards contest.

Figueroa and Lama launched and hosted the TV cooking programme “Con sabor” (With Flavour) for over five years. And they now have a weekly Saturday programme on Havana Radio station.

“Thanks to the workshops (organised by the project), I learned how to sun-dry different condiments and I diversified my production,” Elso Morales, who has a small snack food business, told IPS. “They showed me how to make croquettes and other foods from cassava so that I would have a greater variety of snacks to sell at my kiosk.”

Now the PCCA coordinators are working on a book called “La yuca, un alimento sostenible” (Cassava, a Sustainable Food), showing different ways to prepare this tuber, which was brought to the Cuban archipelago nearly 500 years ago by indigenous people from what is today Venezuela.

In the authors’ opinion, Cubans are not very creative when it comes to cooking cassava.

“Casabe — an indigenous recipe for tortillas made out of grated cassave — has almost disappeared, and is made in very few regions in the country,” Figueroa told IPS.

“The book includes ways of using rock-hard cassava, which we tend to throw away,” she said.

“We have made flan with cassava milk, and pizzas, muffins and cakes with cassava flour that we process ourselves,” she added.