UNITED NATIONS, Sep 26 2013 (IPS) - Sudan’s beleaguered president, Omar Hassan al-Bashir, who threatened to visit the United Nations despite an arrest warrant for war crimes, has backed out at the 59th minute of the eleventh hour. 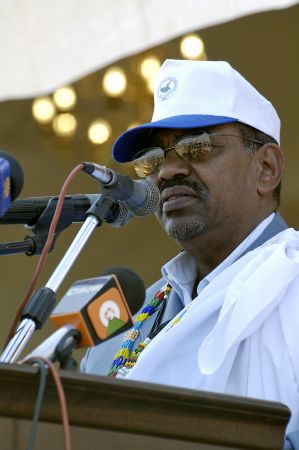 Although he was listed as a speaker Thursday, ahead of President Christopher Loeak of the Marshall Islands and immediately after Croatian President Dr. Ivo Josipovic, al-Bashir decided to skip the high-level debate of the U.N. General Assembly (UNGA) which has attracted world leaders from 193 member states.

Jose Luis Diaz, head of the U.N. office of Amnesty International, told IPS he was not really surprised that al-Bashir had finally “dropped the charade of coming to the United Nations”.

“I hope the revulsion caused by the announcement of his intention to attend the UNGA is translated by responsible states into real efforts to apprehend him and send him to the International Criminal Court (ICC) in The Hague,” he said.

Under the 1947 U.N.-U.S. Headquarters Agreement Act, the United States, in its capacity as host country to the world body, is obligated to allow state representatives to attend meetings at the United Nations.

But the Coalition for the International Criminal Court (CICC), a global network of civil society organisations working to strengthen international cooperation with ICC, has urged the United Nations to review its policies.

CICC convenor William Pace pointed out that major international organisations such as the African Union (AU), the Organisation of American States (OAS) and the European Union (EU) do not allow the participation of representatives of governments that are not considered legitimate – specifically those representing governments resulting from military coups.

“The United Nations should follow these principles and not allow the participation of representatives who are fugitives from international justice,” he added.

Any such decision, however, has to be taken by the General Assembly since Secretary-General Ban Ki-moon is not empowered to bar representatives from any member states from participating in U.N. meetings.

Asked about the proposed visit, U.S. Ambassador to the United Nations Samantha Powers told reporters last week she had seen published reports that al-Bashir intends to travel to New York.

“We would suggest that given that he is under those charges, and that the ICC has indicted him, again, on genocide, war crimes, and crimes against humanity charges that it would be more appropriate for him to present himself to the ICC and travel to The Hague.”

After learning of al-Bashir’s intent to attend the General Assembly, civil society members of the CICC immediately took action, exploring all possible legal avenues to block the visit and calling for all parties involved – the U.S., the U.N. and all member states – to bar his attendance or arrest him, CICC said in a statement released Thursday.

Ambassador Tiina Intelmann, president of the ICC’s Assembly of States Parties, reminded ICC member states over whose territory Al-Bashir’s flight path might take him of their obligations to arrest him, as well as the obligations of all member states to cooperate with the court’s investigation in Darfur.

Pace said al-Bashir should be standing in front of ICC judges in The Hague, not circulating among world leaders at the U.N. He added that al-Bashir’s decision not to attend the General Assembly comes immediately after a trip to Nigeria for an AU health summit “which saw him unexpectedly leave after less than 24 hours in the country”.

“Civil society had encouraged Nigeria to arrest al-Bashir or bar his entry, and the Nigerian Coalition for the ICC filed a petition in the Nigerian courts seeking to compel his arrest,” Pace said.

Giving the highest platform at the United Nations to a man who has arrest warrants issued accusing him of committing the most heinous crimes against humanity would be an insult to the Charter, to the United Nations, to the secretary-general, to the Security Council and to the international community, declared Pace.