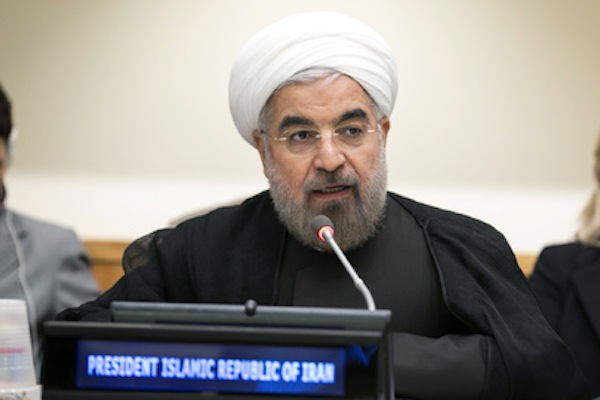 “The Israelis find themselves in a far worse position now than they have been for several years,” concluded Elliott Abrams, a leading neo-conservative who served as George W. Bush’s main Middle East adviser, in Foreign Affairs.

While Israel could still attack Iran’s nuclear sites on its own, “[i]ts ability to do so is already being narrowed considerably by the diplomatic thaw” between Iran and the United States, Abrams wrote. “It is one thing to bomb Iran when it appears hopelessly recalcitrant and isolated and quite another to bomb it when much of the world – especially the United States – is optimistic about the prospects of talks.”

Abrams’ assessment was widely shared among his ideological comrades who believe Israel will be the big loser if hopes for détente between Washington and Tehran gather steam after next week’s meeting in Geneva between Iran and the P5+1 (the United States, Britain, France, Russia and China plus Germany).

The Weekly Standard, a neo-conservative publication, described Israel’s position as “Standing Alone,” the title of its lead editorial at week’s end, although its authors, editor-in-chief William Kristol and the director of the Jewish Institute for National Security Affairs (JINSA), Michael Makovsky, took a far more defiant tone than Abrams. They urged Netanyahu to follow through on his latest threats to attack Iran’s nuclear facilities with or without U.S. approval.

"The United States will be stronger if it can create a new framework for security in the Middle East that involves Iran..."
-- David Ignatius

“No one likes the truth-telling skunk at the appeasement party,” they wrote, asserting that President Barack Obama’s “soft-headed, even desperate, desire for some sort of [nuclear] deal, any deal” with Iran comprised the kind of Western “failure of nerve and a collapse of will” that British Prime Minister Winston Churchill decried with the rise of Nazi Germany in the 1930s.

“Israel is now in the disastrous position of having to hope that Iranian hard-liners sabotage Mr. Rouhani’s efforts to negotiate a deal,” he wrote just before Netanyahu took the podium to denounce Tehran’s perfidy.

The Israeli leader, he complained, had already deferred far too much to Obama’s diplomatic efforts by not attacking Iran last year. Given Washington’s “retreat from the world” – most recently demonstrated by its failure to deliver on threats to attack Syria – the Israelis should “downgrad[e] relations with Washington,” he demanded, and now “must proceed without regard to Mr. Obama’s diplomatic timetable.”

Gary Sick, an Iran expert who served on the National Security Council under Presidents Ford, Carter and Reagan, told IPS that neoconservatives’ recent outpouring of defiance and despair constituted “the most convincing evidence I have seen to date that the die-hard supporters of sabotaging an agreement between the U.S. and Iran are in full defensive mode.”

A week before Iranian Foreign Minister Javad Zarif is expected to sit down with his P5+1 interlocutors in Geneva, Netanyahu and supporters in Washington face a diplomatic and political environment distinctly different from that of just five weeks ago.

That environment is defined above all by a pervasive war-weariness among the U.S. electorate, clearly indicated by strong public support for Obama’s choice of diplomacy over missile strikes to dismantle Syria’s chemical weapons arsenal.

The fact that the disarmament process has so far gone much more smoothly than anyone had anticipated has further discredited neo-conservatives, who were most fervently opposed to the U.S.-Russian deal that made it possible and most enthusiastic about unilaterally attacking Syria and supporting rebel forces who appear increasingly dominated by radical Islamists.

The remarkably positive impression left by Rouhani during his four-day diplomatic blitz in New York in September, capped by an unprecedented phone call with Obama, has created expectations not only for a deal on Iran’s nuclear programme but also for the possibility of a rapprochement between the two nations after 34 years of mutual demonisation.

In his essay, Abrams conceded that Netanyahu’s demand that any nuclear deal require Iran to abandon its entire nuclear programme was no longer realistic and would almost certainly have to be compromised, barring sabotage by hard-liners in Iran.

“Netanyahu is setting forth standards for a nuclear agreement that are far tougher than the Obama administration believes can be negotiated and, as a result, are not even being sought,” he wrote.

The Israeli leader should prepare to accept a limited enrichment programme of up to 3.5 percent and strict limits on the number of centrifuges Iran can run and the stockpile it can hold. Sanctions would be eased in the coming months, he stressed, only to the extent that Iran actually implements the deal.

Yet such a compromise is not so far from what much of the foreign policy elite already considers the most viable deal.

As put forward in an op-ed published Sunday, Washington Post columnist David Ignatius, its basic elements call for Iran to “cap its level of uranium enrichment (at, say, 5 percent) and its stockpile of enriched material” to levels small enough that Israel and the U.S. would have months of “strategic warning” if Tehran made a “dash for a bomb”.

In exchange, the West would lift sanctions and accept “Iran’s rights, in principle, to enrich,” according to Ignatius, whose views often reflect those of the policy establishment.

According to Ignatius, Washington’s engagement with Russia over Syria and Iran over its nuclear programme presents a “great strategic opportunity” which critics are wrong to see as “signs of American weakness or even capitulation.”

“The United States will be stronger if it can create a new framework for security in the Middle East that involves Iran and defuses the Sunni-Shiite sectarian conflict threatening the region,” and that “accommodates the security needs of Iranians, Saudis, Israelis, Russians and Americans.”

But such accommodation is anathema to Netanyahu and his neo-conservative supporters, who insist on Israeli primacy in the Middle East and depict its competition with Iran as a zero-sum proposition that cannot be compromised.