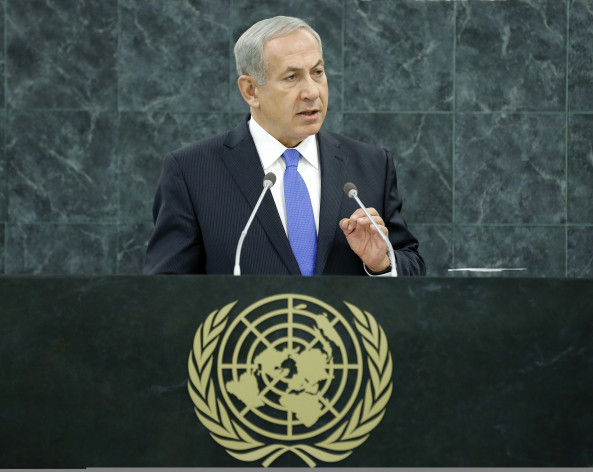 WASHINGTON, Oct 2 2013 (IPS) - Like the proverbial skunk at the garden party, Israeli Prime Minister Benjamin Netanyahu used his turn at the podium at the U.N. General Assembly Tuesday to pour scorn on Iran’s new president, 96 hours after a smiling Hassan Rouhani departed New York after a momentous four-day stay that raised unprecedented hopes for détente with the United States and the West.

Echoing his early assessment of the Iranian leader, Netanyahu described Rouhani as a “wolf in sheep’s clothing, a wolf who thinks he can pull the eyes – the wool over the eyes of the international community”. He demanded that Iran completely abandon its nuclear programme as the price for lifting existing sanctions against Tehran.

“Clearly, Rouhani had scored some points in his latest visit. This was Netanyahu's way of trying to even the score." -- Gary Sick

“The international community has Iran on the ropes,” Netanyahu said in reference to U.S.-led economic sanctions. “If you want to knock out Iran’s nuclear weapons programme peacefully, don’t let up the pressure. Keep it up.

“If Iran advances its nuclear weapons program during negotiations, strengthen the sanctions,” he added.

In a speech that dwelt almost exclusively on Iran, the Israeli leader also suggested, as he has oftentimes in the past, that he was prepared to order unilateral military action against Tehran’s nuclear facilities.

Netanyahu’s speech, which came just four days after a telephone conversation between Rouhani and Barack Obama – the first between the leaders of the U.S. and Iran since 1979, followed a more restrained performance by the Israeli leader here Monday during his White House meeting with the U.S. president.

At that meeting, he contented himself with advising that Iran’s “conciliatory words must be met with real actions” – a point which Obama himself has stressed since last week’s momentous events – although Netanyahu also emphasised that “the ultimate test of a future agreement with Iran is whether or not Iran dismantles its military nuclear programme.”

Netanyahu’s appearance here and at the U.N. this week in some ways could not come at a worse time for the Israeli leader for a variety of reasons, not least of which was the extremely positive impression left behind by Rouhani and his foreign minister and former U.N. ambassador, Javad Zarif.

Zarif remains in New York both to continue consultations with key U.S. opinion-shapers and prepare for the Oct. 15-16 negotiations between Iran and the so-called P5+1 (U.S., Britain, France, China, Russia plus Germany) in Geneva on Iran’s nuclear programme.

The message conveyed repeatedly by both Iranians in an intense, seemingly non-stop stream of meetings with influential media figures, Iranian Americans, think-tank scholars, and former senior U.S. diplomats and other officials – not to mention Thursday’s 30-minute one-on-one exchange between Zarif and Secretary of State John Kerry on the sidelines of a ministerial meeting of the P5+1 attended by Zarif – was that Tehran was prepared to negotiate verifiable limits to its nuclear programme so long as its right to enrich uranium under the Non-Proliferation Treaty (NPT) was recognised and sanctions were lifted.

After those meetings were capped by Obama’s 15-minute phone call to Rouhani as the latter was being driven to JFK airport for his return flight to Iran, the atmosphere surrounding the visit turned almost euphoric, comparable in some ways to Washington’s rapprochement with China in the early 1970s.

Media commentators on weekend talk shows and columnists in U.S. newspapers called the visit “historic” and a potential “turning point” in U.S. relations with a country which it has treated as an enemy for some 34 years.

“The Israeli government has clearly been rattled by the Iranian charm offensive,” noted the New York Times in what has to be considered an understatement given what it called the “dizzying diplomatic developments” set off by Rouhani’s visit.

But aside from being thrown off-balance by Rouhani’s success, Netanyahu also faced an unusual public-relations problem this week: Tuesday’s partial shutdown of the U.S. government resulting from the budgetary impasse between the White House and the Republican-led House of Representatives dominated the news agenda, effectively diminishing Netanyahu’s customary command of the media spotlight and hence, his message.

But even his message – particularly, his demands that Iran completely dismantle its nuclear programme and abandon its right to enrich under the NPT – has come to be viewed by a large consensus of Iran and foreign-policy specialists here as a non-starter for negotiations and clearly identifies Israel as a spoiler.

“We all know that the chance of a [negotiated] settlement is reduced to near zero when we start with pre-conditions that Iran must totally dismantle its entire scientific infrastructure,” said Gary Sick, an Iran specialist at Columbia University who served on the National Security Council under Presidents Ford, Carter, and Reagan.

“Limits yes, but the days of zero or near-zero centrifuges are long past,” he told IPS.

Indeed, key figures in the Israel lobby, including Dennis Ross, counselor of the Washington Institute for Near East Policy (WINEP), a spin-off of the powerful American Israel Public Affairs Committee (AIPAC), has argued for more than a year that Washington should test Iran on whether it will accept strict limits on its enrichment programme and, if so, accept it in exchange for eliminating sanctions.

Indeed, as early as 2011, when Ross was still serving as Obama’s chief Iran aide, then-Secretary of State Hillary Clinton strongly hinted that Washington could eventually accept a peaceful nuclear programme that included some enrichment capabilities.

Even as Rouhani’s U.N. sojourn was unfolding last week, David Harris, the head of the American Jewish Committee (AJC), another major Israel lobby group, warned Netanyahu that his dismissive attitude – as evidenced then by Israel’s boycott of Rouhani’s speech to the General Assembly — toward the Iranian leader risked isolating Israel.

“Did [the boycott] help or hurt Israel to make its case?” he asked in Israel’s ‘Haaretz’ newspaper. “Some would argue it helped by stressing the danger and willingness to act, even if alone. Others, however, would say that Israel only demonstrated its unwillingness to hear the message, even if Rouhani turns out to be, say, the next Mikhail Gorbachev.”

Indeed, Sick said Netanyahu sounded “defensive and shrill” in his U.N. speech Tuesday. “Clearly, Rouhani had scored some points in his latest visit. This was Netanyahu’s way of trying to even the score.”