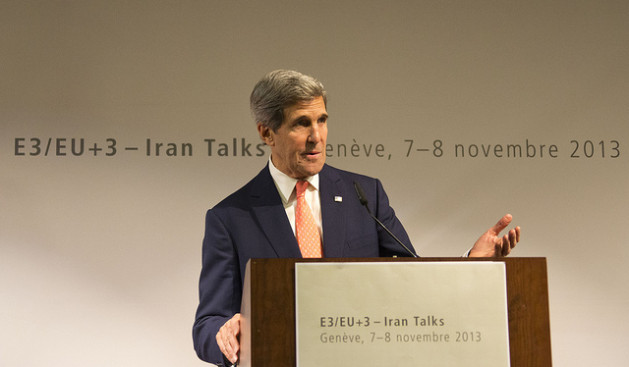 WASHINGTON, Nov 13 2013 (IPS) - The anticipated agreement over Iran’s controversial nuclear programme that seemed to slip away in the last stage of talks in Geneva last week is now being hotly debated on Capitol Hill.

“Right now Congress is looking at the deal that wasn’t and trying to figure out if it could be good enough to support,” Joel Rubin, who  heads policy and government affairs at the Ploughshares Fund, told IPS.

“Congress doesn’t sit on its hands and in this case they want to get involved on sanctions and whether or not to go forward with them, and this puts pressure on the [Barack] Obama administration,” he said.

Testifying Wednesday before the Senate Banking, Housing and Urban Affairs Committee, Secretary of State John Kerry – whose unexpected participation in the talks fueled speculation that a deal was in the works – said he hoped Congress would temporarily hold off on passing more sanctions because they could impede progress.

“We put these sanctions in place in order to be able to put us in the strongest position possible to be able to negotiate,” Kerry told reporters.

“We now are negotiating and the risk is that if Congress were to unilaterally move to raise sanctions, it could break faith with those negotiations and actually stop them and break them apart,” he said.

Some key members of Congress are expressing a different view.

“When Iran complies, sanctions can be unwound and economic relief will follow,” said the Democratic senator, who cosponsored a bipartisan letter to the president in August that pushed for more sanctions and a credible reinforcement of the “military force” option until Iran “slowed down” its nuclear activities.

While stating earlier this week that they would await Kerry’s testimony before deciding on legislation that further reduces Iran’s oil exports, several key players said they were still undecided after the hearing Wednesday.

Other senators have meanwhile said they hope to add amendments involving Iran sanctions to the National Defence Authorisation Bill.

But a former congressional aide and diplomat told IPS “nothing will be passed into law between now and next Geneva round.”

According to Rubin, “I think we were very close to a deal and I think we got pushback and everyone is talking to their capitals now about what can now be achieved and that’s a good thing.

Kerry and Iran’s Foreign Minister Mohammad Javad Zarif were initially unified in Geneva in resisting claims that France was responsible for the lack of a signed accord over Iran’s nuclear programme on Nov. 9.

But after Kerry said the next day in Abu Dhabi that Iran had not agreed to the final draft on the table, Zarif took to Twitter to shift blame away from Iran.

“Mr. Secretary, was it Iran that gutted over half of US draft Thursday night? and publicly commented against it Friday morning?” he tweeted.

Stating that he is interested in an agreement that is “serious and credible”, French Foreign Minister Fabius Laurent argued that the “initial text made progress but not enough” during an interview with France Inter radio on the morning of Nov. 9 in Geneva.

France was the first to announce that no deal had been reached in the early morning hours of Nov. 9 after a marathon round of meetings between Iran and the six world powers known as the P5+1.

Speaking on the dangers of Iran’s nuclear programme on the Senate floor Wednesday, the hawkish Senator John McCain repeated thanks to the French for their role in opposing a deal in Geneva.

“We owe our French allies a great deal of credit for preventing the major powers in the negotiations, the so-called P5-plus one, from making a bad, bad, bad interim deal with Iran, a deal that could have allowed Iran to continue making progress on key aspects of its nuclear programme, and in return it would receive an easing of billions of dollars in sanctions,” he said.

Debating how to deal with Iran

Earlier Wednesday, Senator Lindsey Graham, who shares the position of pressure-advocates Menendez, McCain and other Senate hawks on Iran, forcefully argued against Iranian uranium enrichment, something which Iran has long insisted is an inherent right under the Nuclear Non-Proliferation Treaty to which it is a signatory.

“If the Iranians insist upon enriching, I think that is a non-starter, that is incredibly dangerous and you’ll wake up one day with a North Korea in the Mideast,” said Graham on the Senate floor.

But while conceding that the United States certainly prefers zero enrichment on Iranian soil, one expert argued such maximalist positions will stand in the way of a mutually agreed upon settlement.

“[I]n reality, the quest for an optimal deal that requires a permanent end to Iranian enrichment at any level would likely doom diplomacy, making the far worse outcomes of unconstrained nuclearisation or a military showdown over Tehran’s nuclear program much more likely,” Colin Kahl, the top Middle East policy official at the Defence Department for most of Obama’s first term, said in prepared remarks Wednesday at a House Foreign Affairs hearing.

Questioning the effectiveness of increasing pressure on Iran at this time, Kahl recommended significant constraints on Iran’s nuclear programme in exchange for “meaningful sanctions relief.”

While noting that Congress should be ready to increase pressure on Iran if no agreement is reached before the end of the year, Kahl also testified that it would be “counterproductive” to impose new sanctions on Iran at this time.

“[D]oing so risks convincing the supreme leader that Rouhani’s experiment with moderation is a fool’s errand, empowering Iranian hardliners and aggravating tensions within the P5+1 and the wider international coalition currently isolating Tehran,” he said.