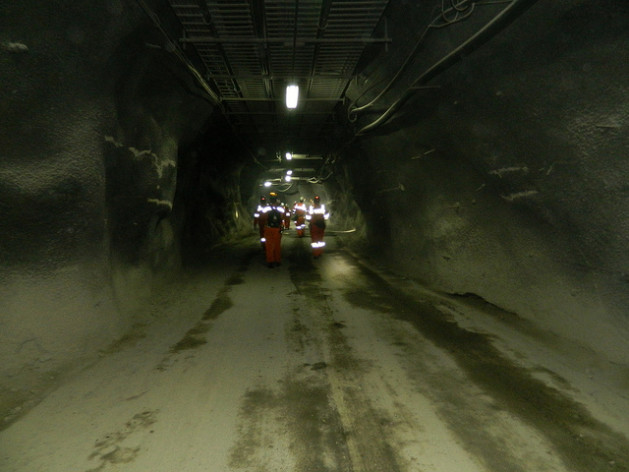 A tunnel in Chile's El Teniente mine, the world's largest underground mine. Credit: Marianela Jarroud/IPS

WASHINGTON, Nov 1 2013 (IPS) - Civil society groups from throughout Latin America are urging “home countries” to take greater responsibility for the actions of their companies abroad, particularly those in the extractives industry.

“We would like to be able to influence policies that are being developed around the supply of minerals for various purposes – a lot of these policies are being framed as having to do with national defence, so there’s practically a guarantee that these reserves must continue to be supplied,” Pedro Landa, with the Honduran Centre for Collective Development, told IPS in Spanish.

"It is not just the host states that have a responsibility in this regard, but also the home states, where these companies come from.” -- Katya Salazar

“But that’s making these companies more aggressive in our countries … Oftentimes these companies are more powerful than the governments, and can simply buy off officials.”

Several groups are currently in Washington to speak on the topic with U.S. lawmakers and to testify before the Inter-American Commission on Human Rights (IACHR), the primary rights forum of the 35-member Organisation of American States (OAS), which has its headquarters here.

The groups are warning that legal frameworks throughout Latin American countries have been overhauled in recent years such that, today, pro-business policies have made it extremely difficult for local communities to oppose mining proposals in their vicinities.

“Honduras is considered one of the most violent countries in the world, with a homicide rate of 86 per 100,000 residents, but this level of crime is very closely linked to the conditions in our country that also have to do with the extractive model,” Landa told a briefing on Capitol Hill on Thursday.

“In countries like Honduras, where there is a lot of social upheaval, it’s easy to pass laws that facilitate the extractive industries, especially mining. But these laws have been harmonised to be in concordance with the free trade agreements that our countries have signed … while many of the proposals have been put forth or influenced by the transnational corporations themselves.”

The United States in particular passed a slew of free trade agreements with Latin American countries during the 1990s, during the process of which the U.S. government mandated labour and trade concessions that, in the eyes of many, gave inordinate power to multinational mining companies. Landa says that the result today is a lack of adequate mechanisms by which local communities can oppose these industries – in any Latin American country.

In part because of trade agreements but also in part because of high global prices for minerals, Latin America has become a hotbed of extractives speculation in recent years. Simultaneously, local communities have seen their legal rights to oppose these projects curtailed.

“Since the 1990s in the region there’s been an expansion of investment in the natural resource sector, as part of the globalisation process and part of the privatisation of state-owned industries, and also linked to the growing global power of China and other developing countries,” Keith Slack, extractive industries global programme manager for Oxfam America, a humanitarian group and host of Thursday’s briefing, told IPS.

Much of this disruption is taking place in indigenous lands, compounding a broader issue in many countries where indigenous communities continue to struggle for agency and rights afforded other citizens. At the moment, most multinational companies do not appear to be adequately prepared for this complexity.

According to a new report released Wednesday by First Peoples, an advocacy group, just 5 of 52 U.S. companies surveyed had policies in place for “productively engaging” with indigenous communities. Indeed, some communities are feeling pressure from multiple companies interested in extraction projects.

“We’re noticing a broad trend in which companies operating in close proximity acquire ‘spillover’ risk from one another,” Nick Pelosi, a grants assistant with First Peoples, told IPS, pointing to such a situation around Neuquen, in Argentina. “In such scenarios, the positive policies and practices of individual companies are overwhelmed by the cumulative negative impacts of all companies in the region.”

Activists are now particularly focusing on trying to strengthen opportunities for local communities in Latin America and elsewhere to pursue judicial remedies for human rights violations in mining companies’ home countries. On Friday, this “home state” responsibility will be discussed for the first time before the IACHR, and proponents suggest that it could offer a new paradigm within international law.

“The Inter-American system and the United Nations have been focused on the responsibility of host states, where these violations happen,” Katya Salazar, executive director of the Due Process of Law Foundation, a Washington watchdog group, told the hearing on Thursday. “But we want to propose something new: it is not just the host states that have a responsibility in this regard, but also the home states, where these companies come from.”

Today, some 60 percent of the foreign mining companies in Latin America are Canadian, and as such last year Salazar and others requested an IACHR hearing specifically on home state responsibility for Canada. Although that hearing was turned down, Salazar notes that Friday’s more general hearing on the topic should be able to lead to a new discussion.

“Similarly, today the discussion on the responsibility of home states is not yet a discussion at the commission. But the idea is that this hearing will open a window of new legal discussions within the Inter-American system.”

The ability of local communities to use the U.S. legal system to seek redressal for rights violations received a significant setback earlier this year. In April, the U.S. Supreme Court refused to allow a group of Nigerian plaintiffs to sue the Royal Dutch Shell Petroleum Company in U.S. court, finding that Shell’s connection to the United States was too tenuous.

Yet critics of the decision say that this is precisely the purpose for which the law in question – known as the Alien Tort Statute – was created.

“When Alien Tort claims are no longer effective in helping people to get responses to violations of their rights, what other tools exist?” Dora Lucy Arias, with the Jose Alvear Restrepo Lawyers Committee, a Colombian NGO, said Thursday, discussing some of the activists’ lobby efforts on Capitol Hill.

“So I’m wondering if, from Congress, we may be able to think about some new and really effective mechanisms to make sure that the victims of these human rights violations have some recourse.”