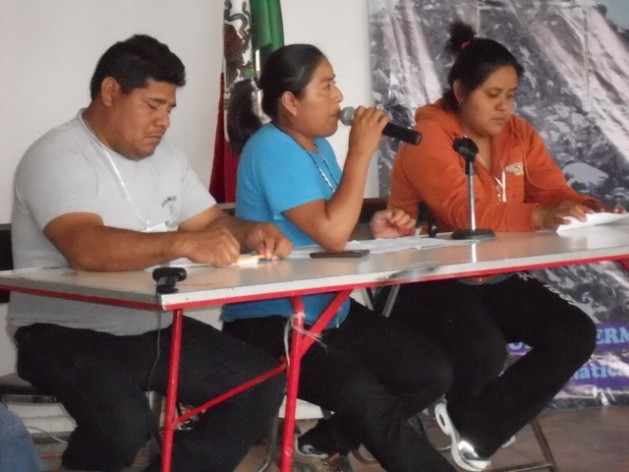 CUERNAVACA, Mexico , Jun 27 2013 (IPS) - “They brutally repressed us. The mining company buys off people’s consciences, it divides the community, but we’ll keep fighting it. Some people have had to flee the community,” Rosalinda Dionisio, a Zapoteca indigenous woman in the southern Mexican state of Oaxaca, told IPS, sobbing.

Her moving testimony illustrated the growing conflicts between local communities and mining companies in Mexico.

Dionisio, 30, still walks with a limp from the leg injuries she sustained when she and other activists from the Coordinadora de Pueblos Unidos del Valle de Ocotlán anti-mining organisation survived an attempt on their lives in March 2012.

The Coordinadora is made up of local residents fighting the San José mining company run by the Compania Minera Cuzcatlan S.A., a subsidiary of Fortuna Silver Mines Inc of Canada, which mines for gold and silver on an area of 700 hectares.

The deposits are located near San José del Progreso, one of the three poorest towns in Oaxaca, which is Mexico’s second-most impoverished state. Most of the 6,200 people in the town are opposed to the mining company’s activities in the area because of the soil and water pollution they cause.

But Mayor Alberto Sánchez heads a group of local residents who back the company. The community is divided and confrontations have occurred – like in other mining towns in Mexico.

Stories like Dionisio’s abound in this Latin American country, which is experiencing a mining boom fomented by the government of conservative President Felipe Calderón (2006-2012).

Under the 1992 mining law, Mexico has granted around 31,000 concessions to some 300 companies for more than 800 mining projects on nearly 51 million hectares. Most of the companies involved are Canadian, according to the economy ministry’s most recent figures.

ProMéxico, the government office dedicated to drawing in foreign investment, and the Economic Commission for Latin America and the Caribbean (ECLAC) report that Mexico is the world’s top producer of silver, in third place for bismuth, fifth for molybdenum and lead, and ninth for gold.

In 2012, the mining industry generated 300,000 direct jobs in Mexico, accounted for seven billion dollars in investment, and represented two percent of GDP, according to official figures.

ProMéxico predicts that in 2014, the mining industry’s contribution to GDP will rise to four percent, and that in the next six years, the sector will bring in 35 billion dollars in investment, in a country where 70 percent of the territory has significant mineral deposits, according to official estimates.

But local communities have clashed with the mining companies because of the deforestation, water pollution and dumping of toxic liquid waste.

Since the 1970s, the people of La Mira, in the western state of Michoacán, have been fighting the Las Truchas iron mine, owned by Siderúrgica Lázaro Cárdenas-Las Truchas, a subsidiary of India’s ArcelorMittal steel and mining company.

“They polluted the water and the air, they damaged our houses, and they’re just taking everything,” complained Melitón Izazaga, a leader of the non-governmental Colonias Unidas de La Mira, which groups residents who have been affected by the nearby mine and steelworks that produce 100,000 tons a month of steel.

The mine and the factory dump waste into a reservoir that pollutes nearby rivers and streams, which are the source of water for the local communities. But so far legal action aimed at curbing the mine’s pollution has been unsuccessful.

San José and La Mira were among the cases presented Jun. 21-23 to the Mexican section of the Permanent People’s Tribunal, in a pre-hearing on the mining industry’s impact on the environment and the rights of local people, which was attended by IPS in Cuernavaca, the capital of the central state of Morelos.

The Tribunal began its work in Mexico in 2011 and will conclude its hearings in 2014 with non-binding rulings based on the evidence collected under seven categories: violence; impunity and lack of access to justice; migration; femicide and gender violence; attacks against maize and food sovereignty; environmental destruction; and peoples’ rights.

“The new mining activity is not seeking to develop anything, but merely wants to extract gold, silver, or whatever. It’s a model for exploitation, not for development of the communities. If we don’t fight them, we’re going to have to leave,” Fernanda Campa, a researcher at the Autonomous University of Mexico City, told IPS.

The government of conservative President Enrique Peña Nieto, who took office Dec. 1, has kept in place the guarantees offered investors in the mining industry. But academics and activists complain that there have been no guarantees for the rights of local communities, and of indigenous people in particular.

Mexico’s indigenous population is variously estimated to make up between 12 and 30 percent of the country’s 107 million people (the smaller, official, estimate is based on the number of people who speak an indigenous language).

According to the Observatory on Mining Conflicts in Latin America, there are 175 socio-environmental conflicts or clashes over natural resource use ongoing in the region, involving 183 mining projects and 246 communities. Twenty-one of these conflicts are in Mexico.

“We don’t want more deaths, but we prefer to lose our lives than go down on our knees before the state. We haven’t managed to get the company to leave; we want justice,” said Dionisio, who spent two months in hospital after the attack that her organisation blames on armed militias hired by Cuzcatlán.

So far, four activists opposed to the mine in San José del Progreso have been killed.

Another criticism of extractive industry policies in Mexico is the low level of benefits that go to the state. Mining companies currently pay between 36 cents of a dollar and eight dollars a year per hectare of their concessions for extracting metals and minerals. The only additional tax they pay is income tax, the amount of which is kept secret.

A “study on the extractive industries in Mexico and the situation of indigenous peoples in the territories in which those industries are located” documented native peoples’ complaints that their rights have not been respected or protected.

They stressed that they have not been made participants in consultation and citizen input processes, and that their free, prior and informed consent has not been sought before concessions are granted to mining companies in their territories – as required by International Labour Organisation Convention 169 Concerning Indigenous and Tribal Peoples.

The report on extractive industries and the situation of indigenous peoples, commissioned by the United Nations Permanent Forum on Indigenous Issues, also cites the criminalisation of protests, the loss of natural resources, negative environmental impacts, health effects and a total lack of benefits for the local population from the mining industry’s activities.

“One day the hillside is going to slide down on us and bury the town,” as a result of the mining activity, Izazaga said.