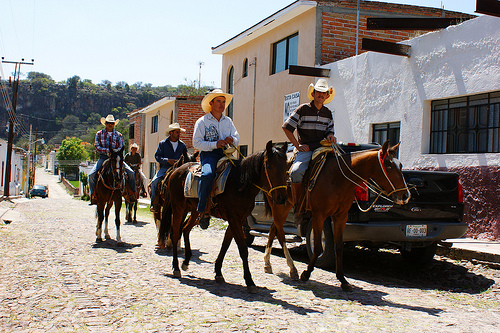 The small Mexican town of Temacapulín would be left underwater by the El Zapotillo dam. Credit: Colectivo Ecologista Jalisco/CC BY-SA 2.0

TEMACAPULÍN, Mexico , Nov 9 2012 (IPS) - “What do we stand to lose because of the dam? We will lose everything!” said Maria Abigail Agredani, a member of the committee for this indigenous community in the western Mexican state of Jalisco, reporting the damage that will be caused by the hydroelectric complex being built nearby.

“We will lose the right to life, our culture, traditions, peace, happiness and freedom, our burial sites and our dead, the square, the Christ of Temaca that we love so much, the Agave temacapulinensis plant, the Verde river and 14 centuries of our people’s history,” said Agredani.

She is a member of the movement to “Save Temacapulín, Acasico and Palmarejo,” small towns that will be completely submerged if the El Zapotillo dam is completed.

Temacapulín, a town of 1,500 people in a kind of bowl surrounded by four hills, hosted a pre-hearing this week about dams by the Permanent People’s Tribunal (PPT), which has held sessions in this country since October 2011.

After listening to the testimonies of people from nine communities that have fought the construction of hydropower complexes in five of the country’s provinces, the members of the PPT issued their verdict Wednesday Nov. 8, condemning the Mexican government and demanding the definitive cancellation of all the hydroelectric megaprojects.

“In no case has the right to consulting with and providing information to the affected communities been respected,” said one of the tribunal judges, Monti Aguirre, as she read out the verdict, which maintains that the procedures have been characterised by “systematic and continued violation of individual and collective economic, social and cultural rights of individuals and communities under threat.”

The PPT was founded in 1979 in the Italian city of Bologna, inspired by Lellio Basso, a lawyer and political leader. It is an international ethical tribunal that seeks to try cases in which crimes against humanity are denounced. Although its rulings are non-binding, they carry moral weight.

The Mexican PPT will conclude its work in 2014, at a final hearing which will review the verdicts of all the pre-hearings held during three years of trials of the Mexican state, on issues such as the dirty war and human rights, migration and forced displacement, femicide (gender-related murder) and gender violence, and workers’ rights.

At this pre-hearing about dams, which is included in the panel on environmental destruction, Miloon Kothari of India, a former United Nations Special Rapporteur on the right to adequate housing, and Professor Carlos Bernardo Vainer of the Federal University of Rio de Janeiro, were invited to act as international judges.

Maude Barlow, a Canadian activist for the right to water, and Monti Aguirre, the Latin America programme coordinator for International Rivers, were also invited.

Local experts Francisco López Bárcenas, an indigenous rights lawyer, Luis Daniel Vázquez, coordinator of the doctoral programme in social sciences at the Latin American Faculty of Social Sciences, and Patricia Ávila of the Ecosystems Research Centre at the National Autonomous University of Mexico also served on the PPT.

In an interview with IPS, Vainer emphasised that a constant feature of complaints from these communities is the lack of information and consultation, and indeed even disinformation that appears to be premeditated on the part of the federal government.

“People are not given adequate, timely information. This seems to be a general complaint,” he said.

The problem, he said, is how each of these cases is connected with the global market. He noted that the links between the dam-building industry and large energy-consuming industries with the financial sector result in emerging economies importing technologically obsolete projects in their efforts to develop.

“To supply people’s energy needs, large dams are not needed, because megaprojects do not serve local development but industrial centres. But how much is energy worth, and what is the value of a nation, a culture or a people? There is no possible comparison,” he said.

In the view of López Bárcenas, the pre-hearing clearly established that the outgoing Mexican government of conservative President Felipe Calderón is “plundering communities” and granting concessions for exploiting natural resources to powerful groups.

“Public policies are promoting the stripping of resources, not the development of communities, and those resources are passed on to other sectors, like mining, hydropower, wind farms and tourism,” he said.

One of the most worrying cases presented at the pre-hearing was that of the Arcediano dam, also in Jalisco. The project is meant to supply water to Guadalajara, the state capital.

If the plan had gone ahead, the village of Arcediano would have ended up entirely underwater. However, in 2009 it was cancelled before completion. But the former residents had to move to small houses in resettlement communities on the outskirts of the state capital.

Guadalupe Lara, who was the last person to leave her home, is now about to publish a book about her struggle titled “Yo vi a mi pueblo morir” (I saw my village die). She told IPS it is “very sad and frustrating to see how those who ought to look after us are robbing us instead.”

Another case was that of La Yesca hydroelectric plant in the western state of Nayarit, inaugurated by Calderón on Tuesday Nov. 7.

“La Yesca will be the emblem of a modern and competitive 21st century Mexico,” Calderón said.

“The government operates illegally to build its projects, which means that in our experience, there is no room for negotiation,” said Rodolfo Chávez of the Council of Ejidos (common lands) and Communities Opposed to La Parota Dam, in Guerrero, where protests succeeded in getting the megaproject cancelled.

“One cannot let them (companies) in even to perform research studies, because they end up trampling all over everything,” he told IPS.

In the case presented by the host community, the people of Temacapulín are affected by the construction of El Zapotillo, a megadam that would lead to the flooding of Acasico, Palmarejo and Temacapulín, their cemetery and chapel, and a 250-year-old church.

Local residents have documented psychological damage, technical errors in the project and violations of two court verdicts – at the state and federal level – compelling the authorities to stop work on the power plant and on family resettlement.

“They want us out of the way. But it’s not even clear what water is going to fill the reservoir, because we have had drought for the past four years,” municipal delegate Alfonso Íñiguez told IPS.

Mónica Olvera, a researcher with the Mexican Movement of Those Affected by Dams and in Defence of Rivers (MAPDER), estimated that over 185,000 people have been forcibly displaced by the construction of hydropower plants in Mexico in the last 40 years.

Members of the PPT delivered their verdict to the Supreme Court on Friday Nov. 9, while the work of the panel on environmental destruction continues on the weekend in the Purépecha community of Cherán in the state of Michoacán.

In that western state, 10 cases of environmental attacks will be presented, including road projects, agribusiness plantations, tourist facilities and mining projects.