The question is whether the changes will vanish once Attorney General Claudia Paz y Paz’s term ends in December 2014.

Never before had a former head of state been tried for genocide in his own country, anywhere in the world. But Paz y Paz managed to bring former dictator Efraín Ríos Montt to trial – above and beyond the fact that the final outcome is hanging by a thread. 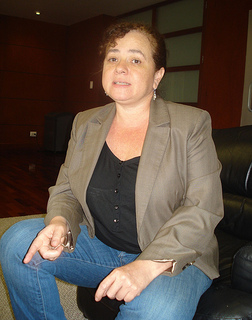 The changes undertaken by Attorney General Claudia Paz y Paz could collapse if they are not institutionalised. Credit: Danilo Valladares/IPS

Paz y Paz, 46, also carried out a purge in the public prosecutor’s office and achieved unprecedented results in sentences for homicide, rape, extortion and kidnapping.

And she did all this in the only country in the world where the United Nations, in conjunction with the government, set up an International Commission against Impunity (CICIG), in 2007.

Guatemala is considered one of the most violent countries in the world, with a murder rate of 46 per 100,000 population in 2009.

The first change introduced by Paz y Paz was the implementation of a performance evaluation system in the public prosecutor’s office.

The prosecutors who resolve the most cases are rewarded with opportunities for promotion, while those who bring in poor results must explain why they have failed to meet their targets and can face disciplinary processes if negligence is found, Paz y Paz told IPS.

Nearly 80 percent of the prosecutors who had spent two decades in the public prosecutor’s office and were between the ages of 65 and 75 decided to retire when the new system was put into effect.

That paved the way for younger prosecutors better qualified to handle forensic evidence to be promoted to section chiefs and district attorneys.

Another stride forward was the priority put on violence against women. Under the administration of Paz y Paz, a special unit that operates around the clock was opened in the public prosecutor’s office, making it possible for a judge to issue restraining orders and other precautionary measures against the aggressors in a timely fashion, without requiring the victim to go from the public prosecutor’s office to the courthouse.

In addition, a specific unit was established to investigate sex crimes, and more resources were assigned to the special prosecutor’s unit for crimes against women.

Furthermore, a new evaluation system uses surveys to ask victims who have filed a complaint how they were treated and whether they suffered discrimination.

The surveys led to the dismissal of a prosecutor in the northern province of San Marcos for sexual harassment of a young woman who had gone to his office to report a rape.

In June 2012, a court in Guatemala found 36 members of the Los Zetas – a notoriously violent Mexican drug cartel – guilty of kidnapping, murder and attacks on the security forces. They were sentenced to between two and 158 years in prison.

“The public prosecutor’s office, headed by Claudia Paz y Paz and supported by CICIG, has made important strides,” political scientist Juan Carlos Garzón, a visiting expert from the Washington-based Woodrow Wilson International Center for Scholars, told IPS. “A former president has been tried and the clandestine structures have begun to come to light.”

Another high-profile case was the prosecution of former president Alfonso Portillo, extradited to the United States in May to face charges of conspiracy to launder money during his 2000-2004 term.

The Constitutional Court authorised Portillo’s extradition in 2011, but the fact that he is still facing charges in court in Guatemala has raised questions about whether his extradition was legal.

“Portillo’s extradition was carried out hastily, and was plagued with irregularities,” Lizandro Acuña, a researcher in the area of justice and security in the University of San Carlos Institute on National Problems, told IPS.

Meanwhile, the trial against Ríos Montt continues. The public prosecutor’s office presented evidence and expert and eyewitness testimony to demonstrate that genocide was committed against the Ixil Maya indigenous community during Ríos Montt’s presidency (1982-1983).

The charges include overseeing the armed forces’ murder of at least 1,771 Ixil indigenous people and the rape of 1,485 girls and women during his 17-month rule – the bloodiest period of the 1960-1996 civil war.

In May, Ríos Montt was sentenced to 80 years in prison. But the Constitutional Court overturned the conviction just 10 days later in response to one of the numerous challenges presented by the defence.

The Constitutional Court ordered a retrial, after ruling that the proceedings should be voided dating back to Apr. 19, when one of the judges suspended the trial over a dispute with another judge about who should hear it.

The trial further polarised public opinion, between those who defend the army’s actions and those who are demanding justice for the victims of the armed conflict, who numbered around 250,000 and were mainly highlands Maya Indians.

Ricardo Méndez Ruiz, president of the right-wing Foundation Against Terrorism, made up of retired members of the military and their family members, accuses Paz y Paz of “unleashing a witch hunt against soldiers.”

In 2011, Méndez Ruiz filed a lawsuit against 26 former members of the Guerrilla Army of the Poor (EGP), which was active during the civil war – including two of the attorney general’s cousins: Margarita and Laura Hurtado Paz y Paz, who he accused of kidnapping him in 1982.

But Paz y Paz said that clarifying the human rights violations committed during the armed conflict “is not a biased action; it is about being responsible for the duties one assumes as attorney general.”

While the case against Ríos Montt is set to reopen in April 2014, survivors and witnesses who have to testify again report that they have been the targets of intimidation and threats.

The attorney general has not yet announced whether she will seek a new term.

She says she is immersed in the task of institutionalising the changes she has introduced in the public prosecutor’s office, and warns that if her successor is not willing to give continuity to the reforms, the progress made will be reversed.

Garzón said “she has made an enormous effort towards strengthening the institution itself. The question is whether it will be capable of weathering her absence when she’s gone.

“What do the political forces want? To destroy what the public prosecutor’s office has done or to continue along the path that has begun to be followed? It’s a political question, and the outlook is very uncertain,” he said.