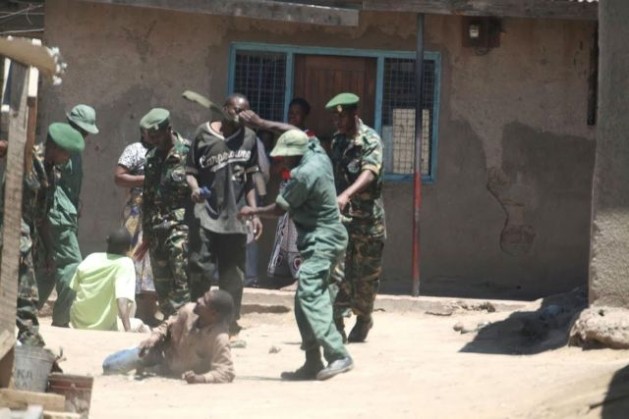 DAR ES SALAAM, Tanzania , Jan 6 2014 (IPS) - Ali Nyenge, a resident of Iputi ward in Tanzania’s northern Ulanga District, woke up as anti-poaching security officers surrounded his home. He says they accused him of illegal hunting and in front of his 11-year-old son, made him take his clothes off, poured salt water on his body and whipped him with a cane.

“I had no choice than to obey their orders,” Nyenge told IPS by phone from Ulanga. “I sustained severe injuries. I could hardly sit down. I begged them for mercy but they kept on hitting me.”

The 38-year-old farmer, who has publically accused security forces of assault, claims the ordeal caused him severe physical and emotional torture. At one point, Nyenge said his captors forced him to draw a python on his thigh using a razor blade.

"The anti-poaching operation had good intentions, but the reported murders, rapes and brutality are totally unacceptable."

Nyenge’s story is one of many to emerge as the government investigates an anti-poaching campaign aimed at reducing the illegal ivory trade, but which has also brought allegations that security forces committed rape, murder, torture and extortion of locals. A parliamentary inquiry found 13 people were murdered and thousands of livestock – the livelihood of many – were maimed or killed.

In October 2013, President Jakaya Kikwete ordered more than 2,300 security personnel from Tanzania’s People’s Defence Force, local police and special anti-poaching militias, and wildlife rangers to step up enforcement of a ban on elephant and rhinoceros poaching, which has been growing in recent years. But in November, Kikwete was forced to end the campaign, dubbed Operation Tokomeza, under heavy criticism.

“The anti-poaching operation had good intentions, but the reported murders, rapes and brutality are totally unacceptable,” Prime Minister Mizengo Pinda told the parliament in December.

During the final two months of last year, the government estimates 60 elephants were killed in the country, compared to only two in October, when the operation was in effect.

Neema Moses, also a resident of Ulanga, told a parliamentary committee formed to investigate human rights abuses that she was stripped naked, made to insert a bottle into her vagina and forced to have sex with her in-laws by security forces.

Presenting a report on the abuses in parliament, the chairman of the committee, James Lembeli, said his team proved beyond doubt that members of security forces spread terror and committed “untold” atrocities against innocent civilians.

Lembeli said victims included local government leaders who were humiliated in makeshift interrogation camps in front of their constituents. He cited the case of Peter Samwel, councilor for Sakasaka ward in Meatu district, who complained he had his arms and legs tied with a rope and was hung upside-down for hours.

According to Lembeli, the raids forced some people to abandon their homes for fear of being harmed.

Eyewitness accounts say suspected poachers lost thousands of animals and other property, including cash, when they were seized or outright stolen by officers.

In Minziro village in Kagera region near Lake Victoria, residents recall a stunning blow they suffered on Oct. 13, when a group of soldiers invaded the village, beat up locals and set ablaze homes of people they suspected to be illegal immigrants.

Abraham Kafanobo, the deputy chairman of the village, told IPS that most residents had since fled and said they feared to return even after the operation had been suspended.

The scandal has led to the sacking of four government ministers – of tourism, defence, livestock development and home affairs – for failure to rein in the ministries they were leading.

Tourism minister Khamis Kagesheki said in October that poachers engaging in the ivory trade should killed “on the spot”.

Lawyer and human rights activist Issa Shivji criticised the military involvement in a civilian operation, saying the way the operation was implemented was a great shame on Tanzania.

Professor Shivji called for a swift investigation of the alleged abuses and said criminal charges should be brought against security personnel who took part in the operation irrespective of their rank.

“It’s not only the shame, it’s a big tragedy to the nation which requires a collective assessment of the people to ask ourselves, where are we going? What prompted security organs, which have the mandate to protect lives, dignity and respect of the people to act [so] irresponsibly?”