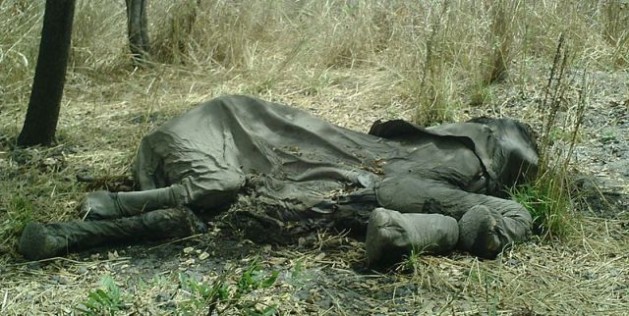 WASHINGTON, Nov 14 2013 (IPS) - The United States has become the first developed country to destroy its stock of seized ivory, a move being widely lauded by conservation groups pushing for an outright ban on domestic ivory sales.

“Efforts like this are motivated by social change, and through this destruction the U.S. government is saying that ivory has no value – that it is a shameful product,” Jeff Flocken, North American regional director for the International Fund for Animal Welfare (IFAW), told IPS from the sidelines of the ivory crush.

“As long as ivory can be openly purchased, there will be an opportunity for illegal ivory to be laundered." -- Jeff Flocken

“In order for any lasting change to take place, we need to see consumer demand go away, and making ivory products be seen as shameful is the way to address this problem.”

On Thursday, the U.S. Fish & Wildlife Service crushed some six tonnes of African and Asian elephant ivory, the result of seizures that have taken place mostly over the past 25 years. Importing commercial or private ivory of any kind is a criminal act under U.S. law, unless the item has been certified by an international group, although its domestic sale remains legal.

The government says the destroyed ivory, which includes both full tusks and carved items, likely represented “a couple thousand” dead elephants, and notes this figure could be far higher.

“We want to send a clear message that the United States will not tolerate ivory trafficking and the toll it is taking on elephant populations, particularly in Africa,” the Fish & Wildlife Service notes in a factsheet released ahead of Thursday’s ivory crush.

“Destroying this ivory tells criminals who engage in poaching and trafficking that the United States will take all available measures to disrupt and prosecute those who prey on and profit from the deaths of these magnificent animals.”

The ivory destruction comes just a day after the U.S. State Department announced its first-ever reward – a million dollars – for information leading to the dismantling of an alleged wildlife trafficking syndicate called the Xaysavang Network. On Wednesday, Secretary of State John Kerry noted that the group, based in Laos but with affiliates in Africa, Southeast Asia and China, “facilitates the killing of endangered elephants, rhinos, and other species for products such as ivory”.

Elephant poaching is currently at its worst point in a decade, with an estimated 95 elephants being killed every day, particularly in Africa. Activists say a two-decade-old international anti-trafficking regime, known as CITES, is unable to withstand new pressures increasingly brought by militant groups slaughtering elephants and rhinoceroses as a money-making enterprise.

Consumer demand is also spiking in Asia, particularly in China. According to a U.N. report released earlier this year, large seizures of ivory bound for Asia have more than doubled since 2009.

“We’re hoping the government’s destruction of this ivory sends a strong message that wildlife poaching will not be tolerated and that ivory shouldn’t be considered an investment commodity,” Lisa Handy, a senior policy advisory with the Environmental Investigation Agency, a global watchdog group, told IPS from the ivory crush.

“We’re also hoping this will send a signal to – and we call on – other CITES parties to take similar actions. Currently some other CITES countries are still seeking a legal sale of their stockpiled ivory, while others are stockpiling it for its value.”

Yet with this action, the United States joins just three other countries to have destroyed state ivory stockpiles. The Philippines did so in June, while both Kenya and Gabon have also destroyed seized ivory in the past two years.

Both of the latter countries have large elephant populations and have faced significant poaching problems. Like the United States, on the other hand, the Philippines is a major destination country for ivory, and thus these actions could potentially impact on the critical consumer demand that continues to create a value for ivory, legal or illegal.

Currently, the United States remains second only to China as the primary destination country for ivory. While applauding the U.S. administration’s new moves on the issue of trafficking, Flocken and others are now pushing for legislative action.

“We’re hoping the U.S. Congress will now introduce a bill to ban the sale of ivory in the United States, or a moratorium for 10 or 15 years until it can be shown to be effective,” he says.

“As long as ivory can be openly purchased, there will be an opportunity for illegal ivory to be laundered. Currently the U.S. laws on ivory are so riddled with loopholes that they are almost impossible to enforce. A clear-cut ban, on the other hand, would remove the U.S. as a major demand country.”

According to the White House, worldwide wildlife trafficking could be bringing in upwards of 10 billion dollars a year. In Africa, environmentalists point to such high-profile groups as Al Shabaab in Somalia and Boko Haram in Nigeria as increasingly turning to this relatively easy and lucrative illegal trade.

This confluence, and the illicit funding it enables, has clearly caught the attention of U.S. officials. Over the past year the administration of President Barack Obama has significantly stepped up its engagement on the issue of global wildlife trafficking, and today the issue is receiving higher priority than ever seen at the upper echelons of U.S. government.

In July, President Obama issued an executive order that made available millions of dollars for new coordination and training, including 10 million dollars earmarked for Africa. In September, the White House announced the formation of a high-level advisory council on wildlife trafficking, which is now tasked with coordinating federal government agencies on anti-poaching efforts both domestically and internationally.

Also at that time, Interior Secretary Sally Jewell announced the government’s plan to destroy its ivory stocks, depicted as the first of a series of related actions in coming months. The department is now reportedly preparing to propose multiple changes to close loopholes in U.S. law and regulation that currently facilitate the smuggling of ivory and other wildlife products.

“The United States is part of the problem, because much of the world’s trade in wild animal and plant species – both legal and illegal – is driven by U.S. consumers or passes through our ports on the way to other nations,” U.S. Fish and Wildlife Service Director Dan Ashe says. “We have to be part of the solution.”