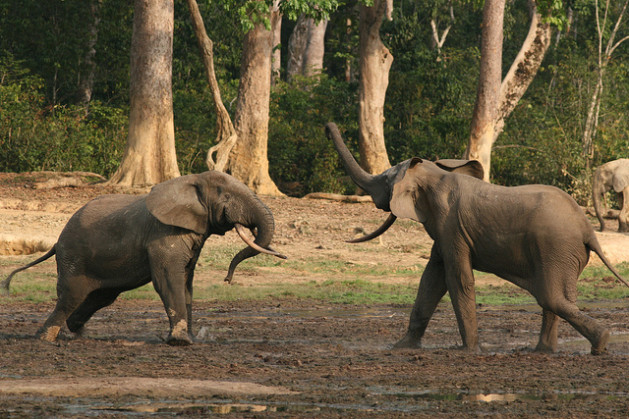 Chinese greed for ivory is taking its toll on the African elephant. Credit: Richard Ruggiero/USFWS/CC By 2.0

KUALA LUMPUR , Aug 12 2013 (IPS) - A distance of nearly 9,000 kilometres separates Malaysia from Africa, but that hasn’t stopped the Southeast Asian nation from becoming a key staging post in the illegal trade of ivory from Africa to China.

“Between June 2011 and March this year, we managed to seize over 10 cases of smuggled ivory,” Khazali Ahmad, director-general of the Malaysian customs department, told IPS.

Close to 50 tonnes of elephant tusk, for which 1,500 elephants would have been killed in Africa, have been recovered in the country since June 2011.

The biggest such haul took place in September of that year, when 695 elephant tusks weighing close to two tonnes were seized in Port Kelang, one of Malaysia’s busiest container ports, 38 km southwest of the capital, Kuala Lumpur.

Two other seizures in January this year from the ports in the northern state of Penang and the southern state of Johore yielded 1.4 tonnes and 492 kg of ivory respectively.

The tusks come hidden under a variety of shipments, be it crates of salted fish, sawn timber or even peanuts. Marked as ‘Export to Malaysia’, local agents, knowingly or unknowingly, declare that the cargo is bound onward to China, making it difficult for the authorities to trace the eventual recipient there. The caches are also accompanied by multiple documents, obfuscating the trail even further.

“All the ivory comes from Africa and is headed towards China,” said Ahmad.

Traditionally, ivory is used to make intricate, expensive collectibles like chopsticks, bookmarks, Chinese cultural figurines as well as ornaments. These find enormous favour with the neo-rich in China as well as among the significant minorities of wealthy people of Chinese descent in outlying countries like Vietnam, Thailand and the Philippines. They are willing to pay a considerable price for the objects of their desire.

Consequently, ivory sells at more than 10,000 dollars per tonne in some markets. The humongous profits from the trade go towards sustaining several wars waged by military or rebel groups in central Africa like the Lord’s Resistance Army (LRA), which are compounded by freelance poachers, smugglers and organised crime syndicates across the continent.

The greed for ivory is taking its toll on the African elephant, whose numbers are declining steadily, so much so that scientists fear the species is becoming close to endangered.

Concern over Malaysia’s role as a transhipment hub for illegal ivory was highlighted for the first time at a meeting of the Convention on International Trade in Endangered Species of Wild Fauna and Flora (CITES) in July. Ivory trade is banned under CITES.
The country, a party to the convention since 1975, was asked to report on what action it has taken to address the issue.

Within Malaysia, there is a growing realisation that the recorded seizures could just be the tip of the iceberg. “How much more African ivory is slipping through our ports?” said Kulasegaran Murugesan, a Malaysian lawmaker and a vocal campaigner for wildlife protection.

The question is, he told IPS, “Do we let this happen and blame others for the illegal trade or do we act proactively and decisively to arrest the ivory trade?”

Murugesan is determined to raise the subject in Parliament, and also intends to apply pressure on port operators, customs and wildlife officials to deny international traffickers the use of Malaysian ports.

The officials say there is little they can do, besides tough action at ports and airports, including the use of scanners. Malaysia’s porous borders allow people and goods to come and go as they please, making the country a preferred outpost for traffickers.

Commending the customs department on its vigilance, William Schaedla, the Southeast Asian director of wildlife trade monitoring network TRAFFIC, said they hoped “to see it pursue all leads towards finding the criminals that are using Malaysia as a transit point for ivory.”

“We also urge authorities to ensure proper systems are in place to catalogue and stockpile the seized ivory,” Schaedla told IPS.

Seized ivory must be destroyed publicly, but activists say this has not been done yet. It could well have found its way back into the market.

“We are in the midst of doing an inventory of the ivory seized,” said Malaysian environment minister Palanivel Govindasamy. He added, however, that it was a new thing for them. “We have to develop internationally accepted protocols,” he told IPS. “It will take some time, but we are working on it.”

Malaysia had not had a single ivory seizure in nearly a decade till the middle of 2011. This did not mean there was no ivory passing through its ports and airports, but it did not have the demand that it does today.

There is no demand for ivory in Malaysia itself. “Our people are not willing to pay so much for ivory and the country is absolutely against the illegal trade,” said Ahmad.

So, while Malaysia too has elephants in its jungles and its zoos, there is no trade in elephant tusk. If elephant numbers are dwindling here, it is because of loss of habitat to oil palm, deforestation and the growing hunger for land to cultivate food crops.

Ahmad called for an international initiative, led perhaps by regional trade block ASEAN, to combat ivory trafficking. “We need the best efforts of other countries as well.”