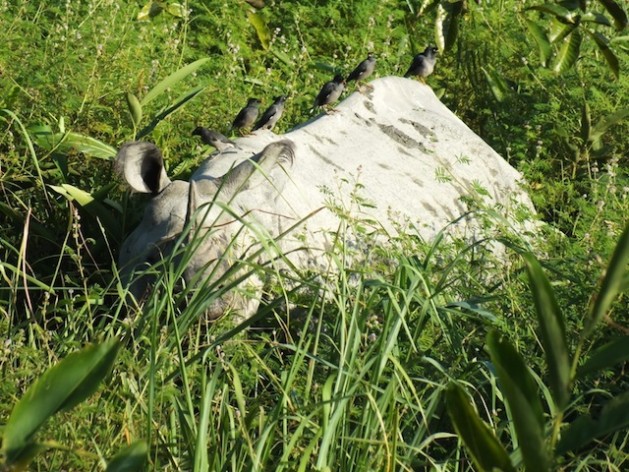 Kaziranga National Park in the northeastern Indian state of Assam, is home to the largest population of one-horned rhinos in the world. Credit: Ranjita Biswas/IPS

GUWAHATI, India, Apr 21 2013 (IPS) - The year 2013 opened on a disastrous note for the one-horned rhinoceros of the northeastern Indian state of Assam. At the beginning of April, officials in the Kaziranga National Park (KNP), one of the last retreats left in South Asia for these endangered creatures, reported that 17 rhinos had been poached.

The ungulate is also found in other protected reserves throughout Assam, namely the Manas National Park in the foothills of the Himalayas on the border of Bhutan, Pobitora Wildlife Sanctuary, not far from the Assamese capital Guwahati and Orang National Park, which sits on the northern banks of the Brahmaputra river, one of the largest in Asia.

But most of the killings happen in KNP, home to the largest population of one-horned rhinos in the world. The park’s resident tiger population, along with its tall grasses, marshlands and moist tropical forest areas that support a high density of biodiversity, earned it the title of a UNESCO World Heritage site in 1985.

“We sometimes find a rhino…still breathing, its horn cut and taken away…Once we found a mother killed and the baby helplessly circling around her.”
When the British colonialists declared Kaziranga a game sanctuary in 1916, there were an estimated 20 rhinos left in the park. Large-scale destruction of rhino habitat across the Indo-Gangetic Plain and rampant hunting had all but wiped out the animal, with the few remaining creatures confined to pockets in the northeast.

A period of relative calm between 1983 and 1989 saw the total number of rhinos killed reach 235. From that point onwards, officials reported only sporadic poaching.

Herculean efforts by wildlife conservationists has today brought the number of rhinos up to 2,329 according to the recently concluded wildlife census of India (2013). This number is a slight increase from the recorded population of 2,290 in 2012, Sanjib Kumar Bora, conservator of forests for KNP, told IPS.

Now, poaching seems to be making a comeback, with officials fretting over the number of corpses they find scattered throughout the park.

The word rhinoceros is derived from the Greek “rhinokerōs” meaning “horn-nosed”. This horn, which is a mass of agglutinated hair, is exactly what has marked this creature out as a target, since a single horn weighing 750 grammes fetches as much as six million rupees (111,000 dollars), according to reports last year.

This exorbitant price is justified by the aphrodisiacal properties ascribed to the horn, which is used in traditional Chinese medicine. Many Chinese hold the belief that emperors used powdered rhino horn to great effect in the harems of ancient China, though modern researchers and scientists have debunked this myth, and prescribe the horn only for certain life-threatening fevers and convulsions.

Numerous international campaigns have been unable to put a complete stop to the practice, and this latest killing spree has park officials worried.

As soon as rangers receive word that poachers are on the prowl, they rush to the scene. Often, they are too late. An official speaking under condition of anonymity told IPS, “We sometimes find a rhino…still breathing, its horn cut and taken away…Once we found a mother killed and the baby helplessly circling around her.”

KNP is currently divided into five ranges: Bagori, Kohora, Agoratoli, Burha Pahar and Northern Range. Plans to add two additional protected areas are in the works, making a total of seven. The sprawling layout of the 860-square-kilometre park is perhaps one of the reasons for the rise in poaching.

“We are running short of staff,” D. Mathur, additional principal chief conservator of forests in Assam, told IPS. “With the additional areas added to the original Kaziranga Park and the animal count rising, there are some bottlenecks in keeping vigil.”

Regular and casual forest guards now number roughly 700 in total, but Bora says even these are inadequate to effectively patrol the large reserve.

Poachers have worked out an efficient system that enables them to evade the watered-down park security force.

Locals from the surrounding area known as “spotters” connive with sharpshooters from neighbouring states like Nagaland, Bora said. These are professional snipers, who live in the park for up to three days at a stretch in pursuit of their quarry, striking in the early morning hours or at the onset of dusk, often using guns with silencers so as to remain undetected.

That it is a creature of habit makes the rhino easy prey – the animal always returns to the same spot to defecate, so a spotter simply has to find a pile of dung and lie in wait.

Poachers are emboldened by the “escalation of the price of the horn in the international market, especially in Vietnam”, Suresh Chand, principal chief conservator of forests for Assam, told IPS.

But money is not the primary form of exchange — sources say the horn is frequently bartered for arms and ammunition for separatist rebels in this insurgency-ridden region. Smugglers favour a route through the town of Moreh in Manipur state, or mountain passes in the surrounding hills.

The recent killings have made the central authorities sit up. According to Chand, “We now have a Forest Protection Force deploying a battalion of 535 personnel exclusively… in Kaziranga. They work with Home Guards (an official paramilitary force), who man the 157 outreach camps across the park.”

Home Guards usually carry .303 rifles but since the poachers now have access to weapons like AK-47s, the central government has agreed to provide arms and ammunition in the AK series and park rangers are now awaiting the delivery of the first batch.

In 2010, the Assam government set a trend by giving forest officials the licence to fire on poachers without fear of criminal proceedings.

Conservationists say that the impending monsoon season (June to September) could spell disaster for the animals, as heavy rains will force rhinos to emerge from the marshlands into the open plains for safety, putting them directly in the poachers’ line of fire.