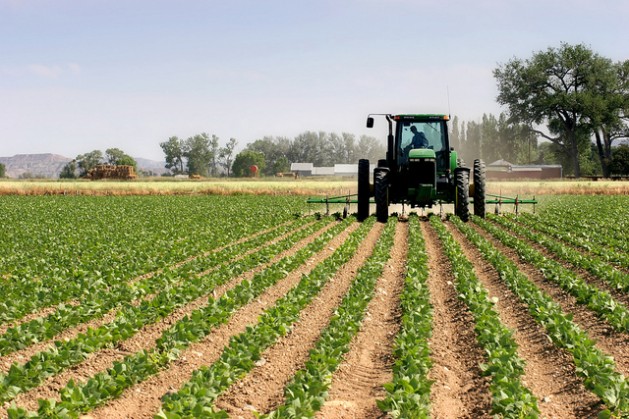 WASHINGTON, Feb 19 2014 (IPS) - An estimated 400 million acres of farmland in the United States will likely change hands over the coming two decades as older farmers retire, even as new evidence indicates this land is being strongly pursued by private equity investors.

Mirroring a trend being experienced across the globe, this strengthening focus on agriculture-related investment by the private sector is already leading to a spike in U.S. farmland prices. Coupled with relatively weak federal policies, these rising prices are barring many young farmers from continuing or starting up small-scale agricultural operations of their own.

"This is no longer necessarily about food at all, but rather is a way to reap financial profits." -- Anuradha Mittal

In the long term, critics say, this dynamic could speed up the already fast-consolidating U.S. food industry, with broad ramifications for both human and environmental health.

“When non-operators own farms, they tend to source out the oversight to management companies, leading in part to horrific conditions around labour and how we treat the land,” Anuradha Mittal, the executive director of the Oakland Institute, a U.S. watchdog group focusing on global large-scale land acquisitions, told IPS.

“They also reprioritise what commodities are grown on that land, based on what can yield the highest return. This is no longer necessarily about food at all, but rather is a way to reap financial profits. Unfortunately, that’s far removed from the central role that land ultimately plays in terms of climate change, growing hunger and the stability of the global economy.”

In a new report released Tuesday, the Oakland Institute tracks rising interest from some of the financial industry’s largest players. Citing information from Freedom of Information Act requests, the group says this includes bank subsidiaries (the Swiss UBS Agrivest), pension funds (the U.S. TIAA-CREF) and other private equity interests (such as HAIG, a subsidiary of Canada’s largest insurance group).

“Today, enthusiasm for agriculture borders on speculative mania. Driven by everything from rising food prices to growing demand for biofuel, the financial sector is taking an interest in farmland as never before,” the report states.

“Driven by the same structural factors and perpetrated by many of the same investors, the corporate consolidation of agriculture is being felt just as strongly in Iowa and California as it is in the Philippines and Mozambique.”

As yet, the amount of U.S. land owned by private investors is thought to be relatively low. The report points to a 2011 industry estimate that large-scale investors at the time owned around one percent of U.S. farmland, worth between three five billion dollars.

Last year, however, another industry analyst put this figure at around 10 billion dollars, suggesting that the institutional share of farmland ownership is rising quickly.

“We’ve been seeing a decimation of the family farmer for a long time, but now these processes are accelerating,” Mittal says. “We need a tightening at the policy level before we’re swamped by these trends.”

In the year after food prices suddenly rose in 2008, global speculation in land rose by some 200 percent. With the international financial meltdown coinciding almost simultaneously with this crisis, investors have increasingly viewed agricultural land as a relatively safe place to put their money amidst rising volatility.

In the United States, investors are particularly eyeing potential future returns from mineral prospecting, water rights and strengthening trends in meat consumption. U.S. farmland is also seen as globally desirable due to a combination of high-tech farming opportunities and lax regulations regarding the use of genetically modified crops.

As a result of this new interest, land prices in the United States have risen by an estimated 213 percent over the past decade. This could now play into two trends at once.

Already, the United States is home to relatively low numbers of farmers, with the country famously home to more prisoners than full-time agriculturalists. But those who do continue to farm are also quickly aging.

While federal agriculture officials are expected to offer updated demographic information within the coming week, the most recent statistics suggest that just 6 percent of farmers are under 35 of age. Further, some 70 percent of U.S. farmland is owned by people 65 years or older.

“The older generation needs to cash out because they have no retirement funds, even as the new generation doesn’t have the capital to get into the kind of debt that [starting a farm] requires,” Severine von Tscharner Fleming, a farmer and co-founder of the Agrarian Trust, a group that helps new farmers access land, told IPS.

“Today there is a huge number of older folks trying to decide what to do with their land, and in many places we don’t have many years to help them make that decision. So in that sense there’s an urgent need, and we don’t have many tools at the federal level to help.”

For the most part, Fleming suggests, U.S. federal agriculture policy today is not aligned to the country’s best interests, instead pointing away from greater agricultural diversity, regional resilience and greater strengthened opportunity for rural economies. Nonetheless, she says that her organisation is encountering a surge of attention from young people that want to start their own farms.

“Over the past seven years, we’ve had an explosion of interest in being trained as a farmer and entering the trade of agriculture, and this is very much related to the crises around the banks and the environment,” she says.

“The problem we’re facing is not one in which nobody wants to farm, but rather the fact that the U.S. economy is structured in such a way that makes it really hard to start a farm in this country.”