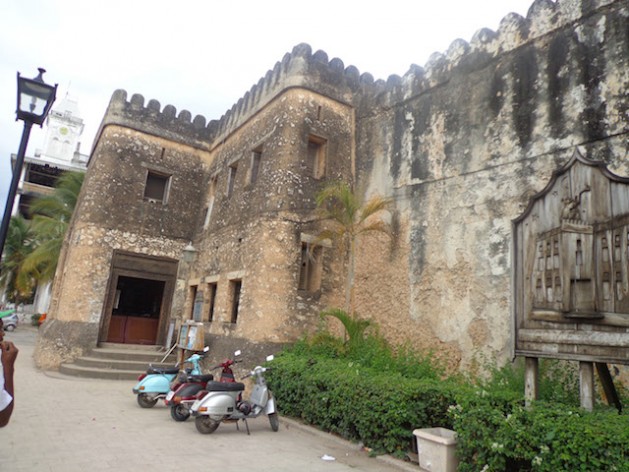 An old fort building in Stone town, Zanzibar, Tanzania. On average at least one case of gender-based violence, including rape, is reported daily in Zanzibar. Credit: Zuberi Mussa/IPS

ZANZIBAR, Tanzania, Feb 26 2014 (IPS) - The story of Feiza*, an 18-year-old girl who was abducted and raped, is a bleak testament to the worsening plight of women in Tanzania’s semi-autonomous archipelago, Zanzibar.

Last month, Feiza was attacked by a knife-wielding man as she walked along a street in northern Zanzibar. He raped her and then fled.

“I don’t want to remember that day, it was horrible,” Feiza tells IPS from her aunt’s home where she lives.

She says that she was rescued by a passersby who phoned her father for help.

“The outcome of our research has proved beyond a doubt that violence against women is still rampant in Zanzibar." -- Gladness Munuo, TAMWA

But when her father, who launched a man-hunt to find the rapist, finally apprehended his daughter’s attacker — the only justice he sought was monetary.

It turns out that Feiza’s attacker was the son of a prominent man in the area.

Feiza’s father tells IPS that although he is deeply angered by the assault, the best he can hope for is an out of court settlement to preserve his family’s honour. The legal system, he says, is too corrupt to deliver justice.

“Even if you go to the police, they will arrest the suspect and release him the next day,” he says.

Statistics from the Rape Crisis Intervention Centres here show that on average at least one case of gender-based violence, including rape, is reported daily in Zanzibar.

A study released by the Tanzania Media Women’s Association (TAMWA) this month shows that rape, early pregnancies and child marriages are rising at an alarming rate in Zanzibar with 996 cases reported between 2012/13 as compared to the 398 in 2011.

TAMWA’s board member Gladness Munuo tells IPS that despite significant effort by rights activists and international donors to raise awareness about gender-based violence in Zanzibar, incidents have increased.

“The outcome of our research has proved beyond a doubt that violence against women is still rampant in Zanzibar,” she says.

She admits that it is, however, possible that incidents of assault against women are seen to be increasing because society was more enlightened and more readily reported cases. However, only a few reported rape cases ever make their way to court.

Asha Abdul, a TAMWA activist, attributes the increase in violent assaults against women to a number of factors, including the growing impunity of perpetrators.

“The police are the main obstacle, they don’t do their jobs properly while handling rape cases. That’s why most victims are not willing to report these incidents,” she says. As a result, many perpetrators are not even charged or investigated for their crimes.

According to Abdul, poor investigation has exposed rape victims and made them more vulnerable to social stereotypes. In some cases, witnesses have refrained from providing evidence for fear of being isolated by their community.

The police acknowledge that often victims and witnesses of violent assaults do not provide adequate evidence to convict suspects.

Zanzibar Urban-West Regional Police Commander Mkadam Khamis, however, dismissed the allegations of incompetence among the police. He tells IPS in an interview that the police force was working in accordance with the law, and it has the duty to protect all people and their property irrespective of their status.

“Our job is to protect the citizens, we follow legal guidelines when investigating abuse cases. It’s not true that we are not doing our investigations properly,” he says.

TAMWA says that courts, judges and prosecutors lack the skills to handle gender-based violence cases and this leads to trials that last for years, increased intimidation of victims and witnesses, and ultimately results in many cases being dropped.

But Walid Adam, a lawyer with the Zanzibar Directorate of Public Prosecutions (DPP), tells IPS that rights groups are probably over reacting because lawyers and judges are qualified professionals with vast experience to handle such cases.

“I have no doubt that members of the judiciary are doing their job very well, let’s not underestimate their capabilities,” he says.

Adam points out that there are often cases were people destroyed crucial evidence before reporting a crime. He says often parents of young rape victims bathe their children first.

“Even those who know this is not procedure, they find it very difficult to leave their child in that state. But the moment they bath her, evidence is lost,” he says.