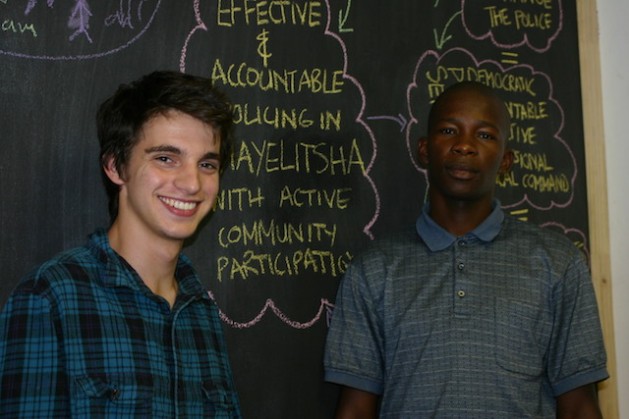 CAPE TOWN, Mar 11 2014 (IPS) - Margaret Feke* got off a taxi in Khayelitsha, a township in Cape Town, South Africa, carrying a package of new clothes for her son who was due to leave for his traditional initiation into manhood in the Transkei the following day.

The clothes, which according to custom her son would wear once he completed his initiation, had cost 180 dollars. Feke, who earns 15 dollars a day as a domestic worker, had been paying for the new outfit in instalments and had just made the final payment after receiving her Christmas bonus in December.

Within minutes of getting off the taxi, a group of young men attacked her from behind, bludgeoning her arms with heavy sticks so that she would drop the package and her handbag. They grabbed her goods and fled, leaving the stunned 46-year-old sprawled in the middle of the road.

“People in general aren’t in support of this violence, but they are fighting back the only way they know how." -- Ian Hanson from activist group Ndifuna Ukwazi

“I felt like my heart would die,” the single mother of three told IPS. “For six months I paid and paid for those clothes. My son was leaving the next day, I had no more money, I didn’t know what to do. I just sat there and cried.”

A neighbour advised her not to bother going to the police but to rather “call the community” to find and punish the culprits.

“That night they found those boys — one of them was even wearing my son’s initiation jacket. They took them to a field and beat them,” she recalled.

The field Feke refers to has been dubbed the “Field of Death” in Khayelitsha, where vigilante “justice” is often meted out by members of the community.

Two years ago in March 2012 it was the site of a triple murder when three men accused of robbery were “necklaced” — a gruesome practice used to kill suspected police informers during the anti-apartheid struggle. It involves placing car tyres around the victim’s neck, dousing them with petrol and setting them alight. Photos of the vigilante necklacing were captured on the mobile phones of some of the 1,000-strong mob and circulated online, sending shockwaves through the rest of South Africa.

But shocking as they may be, vigilante killings in South African townships are nothing new. A 2009/2010 study conducted by the Centre for the Study of Violence and Reconciliation reported that an average of two vigilante killings took place in the country every day.

Khayelitsha — the country’s most murderous area, according to South African Police Service (SAPS) statistics — accounts for far more of its fair share of this statistic.

At least 78 people — or an average of five per month — were killed by angry mobs in Khayelitsha between April 2011 and June 2012, according to an August 2012 SAPS Task Team Report.

SAPS spokesperson Solomon Makagale failed to comment on the vigilante attacks in Khayelitsha.

But activists on the ground told IPS that they are certain mob attacks have increased over the past year.

“The reality is that every day people are being beaten by vigilante mobs. And the fact is that people are murdered for the very same crimes they are beaten up for, even crimes as ‘small’ as stealing a mobile phone,” Ian Hanson from activist group Ndifuna Ukwazi, who collected affidavits from residents for the Commission of Enquiry into Policing in Khayeltisha, told IPS.

The independent commission was established in 2011 by Western Cape Premier Helen Zille after a group of civil society organisations submitted a formal complaint that Khayelitsha was in crisis due to inept, dysfunctional and corrupt policing. The commission is expected to present its findings in June.

Phumzile Tyulu, a former Khayelitsha resident and a Ndifuna Ukwazi member who worked with Hanson to collect affidavits for the commission, told IPS that vigilantism has become endemic in the sprawling township.

“People are poor, very poor, so to be robbed of your mobile phone, or the only R20 [two dollars] you have, is very serious,” he said.

“The police don’t help. The courts don’t help. Even if the perpetrator is caught red-handed, he’ll be on the streets the next week. The community sees this and they’re tired of it. They have lost all faith in the entire criminal justice system, but the police in particular. The result is that it is now normal for people to turn to the community when a crime is committed, not the police.”

His views are backed up by a Community Perception Survey into Policing in Khayelitsha, ordered by the Commission of Enquiry, which was finalised in late February.

Close to one-fourth of residents surveyed said the police “did nothing” when they reported crime. And a majority of Khayelitsha’s half a million residents live in a perpetual state of fear, with many saying they do not feel safe in their own community.

“Vigilantism is a response to this constant victimisation in their own community,” Hanson said.

“People in general aren’t in support of this violence, but they are fighting back the only way they know how,” he added.

Almost a quarter of Khayeltisha residents view vigilantism as justified, and say mob justice is more effective than police intervention.

Feke agrees. “After they beat those boys, they confessed and they took the community to a shack where my things were. I got all my son’s clothes back, and my handbag with my phone still in it. If I had gone to the police that would never have happened, never.”

But there are also cases of families who have been devastated by vigilantism.

“There are a lot of cases of mistaken identity,” Tyulu explained. “And there are cases where someone has a grievance with someone and so they lie to the community and say the other guy has robbed him. There is no ‘fair hearing’; the only interrogation that takes place is during the beating itself. Suspects are beaten until they confess, whether they are guilty of the crime of not.”