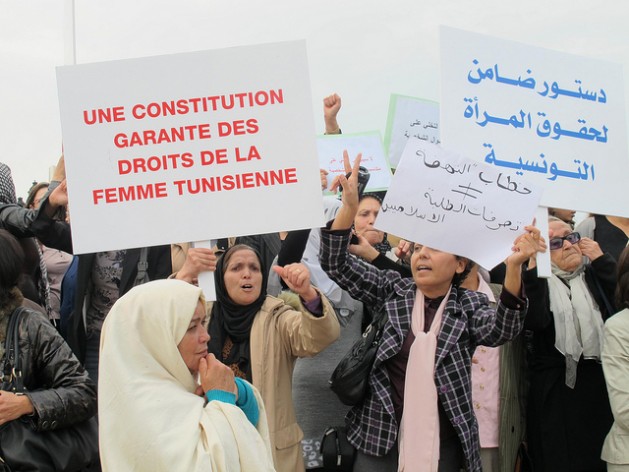 Women protest in Tunis to demand protection of their rights. Credit: Giuliana Sgrena/IPS

UNITED NATIONS, Mar 6 2014 (IPS) - In much of the Arab world, women’s participation in the labour force is the lowest in the world, according to the United Nations, while women in politics are a rare breed both in the Middle East and North Africa.

"There is no doubt that culture and religion play some role, but the fact remains that over the past 30 years, and particularly in the last decade, we have seen the rising tide of very conservative forces in the region." -- Sanam Anderlini

The North African nation has reached the critical mass of some 30 percent of women parliamentarians, while Saudi Arabia has broken new ground by welcoming women to the Shura council.

Still, with a regional average of female parliamentarians just above 12 percent, the Arab world remains far behind the already low global average of 20 percent, according to U.N figures.

Asked whether this was due to cultural or religious factors, Puri told IPS, “It is not easy to pinpoint a single cause for the low level of women’s participation in the labour force and in politics in the Arab world, and more generally, around the world.”

She said there is no doubt that entrenched gender stereotypes and social norms that condone discrimination against women play a negative role, but other factors also need to be taken into account.

These include, for example, access to and quality of education, opportunities to reconcile professional or political life with family responsibilities, the overall structure of the labour market, and prevalence of violence against women.

When representatives of women’s organisations meet in New York next week, one of the many issues before the U.N. Commission on the Status of Women (CSW) will be the low level of women’s participation in the labour force and in political and social life worldwide. 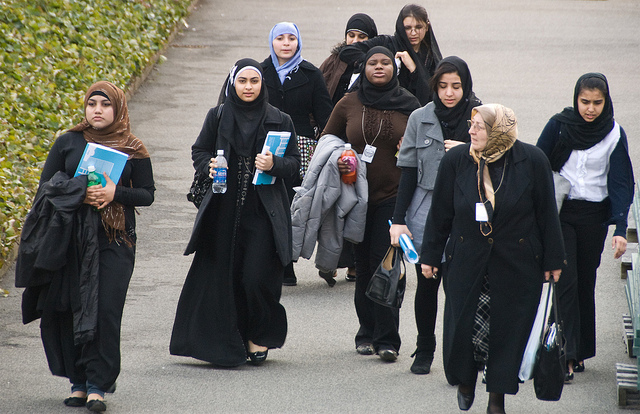 Women wearing the traditional Hijab attend the Commission on the Status of Women at U.N. headquarters in March 2010. Credit: Bomoon Lee/IPS

The CSW, scheduled to hold its annual sessions Mar. 10-21, is the primary inter-governmental policy-making body on gender equality and advancement of women.

This year’s session will focus on challenges and achievements in the implementation of the U.N.’s Millennium Development Goals (MDGs), specifically for women and girls.

Sanam Anderlini, co-founder of the International Civil Society Action Network (ICAN) and a senior fellow at the Center for International Studies at the Massachusetts Institute of Technology (MIT), told IPS: “We should steer clear of assuming that the low levels of participation in public spaces – political and economic – are ‘entrenched ‘cultural or religious values.’

“There is no doubt that culture and religion play some role, but the fact remains that over the past 30 years, and particularly in the last decade, we have seen the rising tide of very conservative forces in the region – largely supported by regional governments themselves – that are promoting a regressive agenda towards women.”

Let’s not forget that Egypt had a feminist movement in the 19th century, she added.

These, she pointed out, include family codes and parallel traditional legal and justice systems that deny women property and inheritance rights, access to productive resources, sanction polygamy and early and child marriages, and put women at a disadvantage in marriage and divorce.

At the same time, it is essential to tackle negative misinterpretations of religion or culture that not only condone but perpetuate myths about inherent inequality between men and women and justify gender-based discrimination.

“As we at UN Women have pointed out, along with many faith-based and other organisations, equality between women and men was propounded centuries ago in the Arab region,” Puri said.

At the same time, governments along with all stakeholders, including civil society, need to put in place an enabling environment in order to increase women’s participation in all spheres of life, said Puri.

Anderlini told IPS that in the Arab world – like any other part of the world – there are always different cultural forces at play simultaneously: conservative and progressive.

But in the Arab world, the conservative forces are seeking to erase or discredit the gains made in the past.

“They like to associate ‘women’s rights’ with immorality and westernisation. It is a clear political agenda that is being fomented and we must not fall for the notion that it is ‘cultural’ or religious’,” said Anderlini, who was appointed last year to the Working Group on Gender and Inclusion of the Sustainable Development Network for the U.N.’s post-2015 economic agenda.

She also said Islam calls for equal rights to education for women and men – to equal pay, to women’s rights to inheritance and participation in public life.

“What’s being spread are extreme interpretations of Islam that may be rooted in countries like Saudi Arabia but are newer to Egypt, Tunisia or Lebanon,” she warned.

First, a reform of state constitutions and laws as well as of traditional legal and justice systems and the creation of a conducive policy environment based on international women’s rights norms and instruments, such as the Convention to Eliminate All Forms of Discrimination Against Women (CEDAW) and the 1995 Beijing Platform for Action, needs to be in place.

This environment should not only allow, but also encourage women to participate in the work force and in public life.

It must include temporary special measures, such as quotas in all public institutions. Education, training and skills building is also essential.

In the workplace, reconciling family responsibilities with professional life must be addressed, as women still undertake most of the domestic and care work, said Puri.

This must include effective maternity leave practices and provisions, affordable and accessible childcare and other caregiving structures, as well as incentives for men and boys to play a greater role in undertaking domestic work, such as compulsory paternity leave, she noted.

The policy environment also must focus on preventing violence against women at home, harassment at the workplace and in public spaces, so that women and girls do not fear any repercussions for partaking in public life.

Secondly, she said, there has to be bottom-up change.

“This means changing entrenched patriarchal mindsets and shift from attitudes and beliefs that focus on women’s reproductive role to women’s productive and public roles,” stressed Puri.