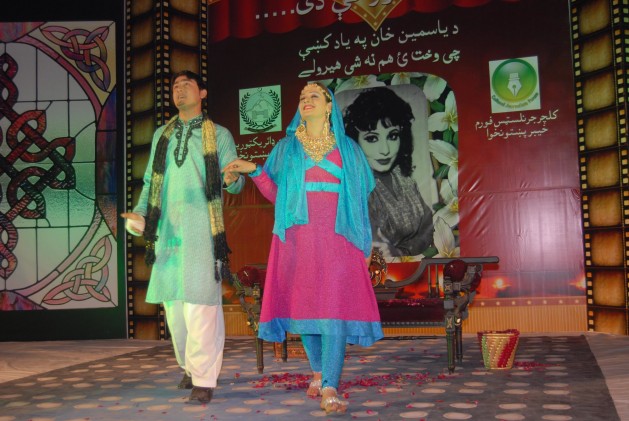 A singing performance in Peshawar that would have been unthinkable under Taliban dominance earlier. Credit: Ashfaq Yusufzai/IPS.

PESHAWAR, Pakistan, Jan 15 2014 (IPS) - For many years they could not sing, dance or play their favourite instruments. The performing artists of Khyber Pakhtunkhwa province of northern Pakistan lost their voice as the Taliban carried out terror attacks and banned music, calling it un-Islamic. But after tentative advances in recent months, the Pakistani province is alive with the sound of music once again.

After the resumption of open sales of music, and the occasional theatre performance, music is now back in business in full swing – in many if not all areas. The big change has come in the months following elections in May 2013.

“The past five years have been very difficult for musicians because of Taliban militants. Now we are heaving a sigh of relief as acts of terror have gone down,” singer Gul Pana told IPS.

“Thanks to a new government, the majority of singers and instrumentalists have returned to work." -- singer Gul Pana

The region’s Pakhtun people were traditionally fond of music. But from 2008 to 2013 musicians faced a hard time as the province was under the rule of the anti-Taliban Awami National Party (ANP), and militants carried out explosions and suicide strikes. The Taliban stopped musicians from holding programmes.

With the Taliban’s influence waning in the region and the new provincial government actively encouraging artists since it came to power, music is making a comeback.

“Thanks to a new government, the majority of singers and instrumentalists have returned to work,” said Pana, who is a student at the University of Peshawar, but is busy performing at concerts and marriages and doing playback songs in films.

Swat, a district in Khyber Pakhtunkhwa, was once known for its singers and dancers. The scenic, mountainous region has many streams and rivers that were used as a backdrop for film songs. But the area ran out of artists from 2007 to 2010 because of the punishments handed out by the Taliban.

In January 2009, Taliban militants killed well-known dancer Shabana in Swat, sending a chill down the spine of the performing arts fraternity. Many fled or quit their profession altogether to avoid being targeted by the Taliban.

But music can be heard in the hills and valleys of Swat today. The Taliban were evicted from Swat through a military operation in 2010.

“We are back. Every night, there are musical functions that provide entertainment to locals as well as enthusiasts from the rest of the country,” said Muhammad Suleiman, a harmonium player in Swat.

Suleiman says his two dancer daughters were the only breadwinners in his 12-member family but, during Taliban rule, it became hard to have two square meals a day.

She said dancing had always been a passion for her. “I enjoy music and dance. And with what I earn, my two brothers can continue their studies in school,” she said.

Musical performances are also back in Peshawar, the capital of Khyber Pakhtunkhwa. After cricketer-turned-politician Imran Khan’s Pakistan Tehreek Insaf (PTI) party came to power at the head of a coalition in the province, the music scene has undergone a transformation.

“People invite us to perform at private programmes and pay us well. Pakhtuns are traditionally fond of music and shower money on performers to show their appreciation,” Shah Sawar, a budding crooner, told IPS.

Sawar, 25, says he recently performed in front of Imran Khan and won praise from him. “It was encouraging to get a pat on the back from Imran Khan.”

Nishtar Hall, the sole theatre in Peshawar, has sprung back to life and from tentative beginnings and now hosts musical functions almost every day.

“We get calls from sponsors every day. Besides local artists, singers from other parts of the country also perform here,” Karam Khan, an official at the government-run Nishtar Hall, told IPS.

Every function at the 600-seat hall draws hundreds of enthusiasts who flock to the venue well before the commencement of a programme, he said.

“Gone are the days when Nishtar Hall used to remain shut due to the Taliban’s threats. The situation is back to normal and cultural activities have gained momentum,” Karam Khan said.

Mashooq Sultan, a yesteryear diva, is also happy with Imran Khan’s party. “He has proved to be a blessing for more than 10,000 performers who had virtually been jobless before this party came to power. It had become difficult for me to provide for my family because there were few musical functions. We appreciate Imran for making the law and order situation better,” she said.

“The last six months have been very good for us. We have performed at Nishtar Hall and at private functions,” Sultan, who claims to have sung 5,000 songs on TV and radio, told IPS.

The Federally Administered Tribal Areas (FATA) near the Afghan border is still teeming with militants, depriving people there of dance and music. Some parts of Khyber Pakhtunkhwa where the Taliban still has influence can feel the restrictions on music even now.

But Sultan says music cannot be stopped in this part of the world. “Marriages and other festive ceremonies are considered incomplete without music and the Taliban cannot ban it forever.”