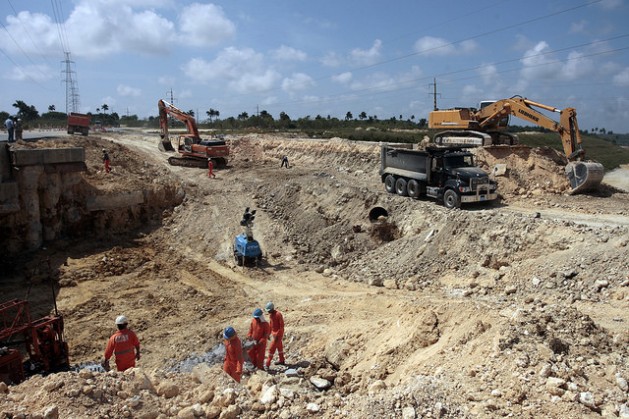 Construction of a railway running to the special development zone in the port of Mariel. Credit: Jorge Luis Baños/IPS

HAVANA, Apr 1 2014 (IPS) - A new law opening Cuba up to foreign investment and a shift in the country’s relations with the European Union are aimed at seeking outside support to overcome the chronic crisis plaguing the country since the early 1990s.

The new legislation could also facilitate the return – at least financial – of Cubans living abroad.

The new foreign investment law, which received unanimous approval in the legislature Saturday Mar. 29, invites foreign investors to operate in all sectors of Cuba’s planned economy, with the exception of four strategic areas: health, education, the media and the military.

The objective, according to the minister of foreign trade and investment, Rodrigo Malmierca, is to draw some 2.5 billion dollars a year in foreign direct investment.

The vice president of the Council of Ministers, Marino Murillo, said more FDI was needed in order for the economy to grow at an annual rate of around seven percent.

A 46-year-old schoolteacher who wished to remain anonymous told IPS that she hoped the economy would improve now. But she also said her late father, who worked in a sugar mill, used to tell her that before the 1959 revolution, wealthy foreigners would come to Cuba, set up companies, and take all the profits back to their own countries.

“But I understand that the law passed now is for the good of the country,” she added.

Like her, other people consulted by IPS said they hoped the opening to foreign investment would bring better living conditions for Cuba’s population of 11.2 million.

“Foreign investment is a necessary step for leaving the crisis behind as well as for the development of any nation,” said ecologist Isbel Díaz.

The new law, which will go into force 90 days after it is published in the Official Gazette, replaces a 1995 decree.

Former economy minister José Luis Rodríguez wrote in an article that the sharp drop in investment was due to the expiration of contracts, breach of terms, and negative economic results from some of the ventures.

Other sources point to additional reasons like excessive red tape, non-payments and cases of corruption.

Brazil’s participation will grow in the near future, mainly in the special development zone in Mariel, which is being built with financial support from South America’s giant.

That megaproject under construction 45 km west of Havana is to become a pillar of Cuban development due to the geographic location of the port, remodelled to equip the terminal to receive deeper-draft ships.

At the same time, the start of negotiations of a new political accord with the European Union, which would normalise relations between Cuba and the European bloc’s 27 member countries, will put the bloc in a good position to do business with this Caribbean island nation as it opens up to foreign investment, analysts told IPS.

The talks are set to begin in April, and analysts say the likelihood of an agreement could be fuelled by the new law on investment.

European representatives have indicated that the aim of the negotiations is to reach an agreement that supports “reform and modernisation” in Cuba, while promoting human rights.

“Europe already has strategic and economic interests on the island, cultivated for decades, and linked with the presence of its companies and networks of influence in Cuba,” Arturo López-Levy, a Cuban political scientist living in the United States, told IPS via email.

But López-Levy, a lecturer at the University of Denver, Colorado, said Europe had a limited window of time to jockey for position in Cuba “before the onslaught of business from the United States.”

In his view, the reform of the Cuban economy, which began to be implemented in 2008, has begun to “whet the appetites” of members of the U.S. business community and of Cubans living in the United States, despite Washington’s 52-year-old trade embargo against Cuba.

The embargo keeps companies in the United States from competing for space in the Cuban market, and puts the EU in a “privileged position,” said López-Levy.

He said the opening to foreign investment makes it more likely that “the United States will replace the current policy of self-isolation with one more in line with its democratic values and economic and strategic interests.”

Foreign investment in Cuba would be focused on the diversification and expansion of export markets, access to state-of-the-art technologies, and import substitution, with a priority on food.

It also guarantees that property will not be expropriated “except for reasons of social interest or public utility previously declared by the Council of Ministers and with due compensation,” said the president of the parliamentary commission on constitutional and legal affairs, José Luis Toledo.

The new law will allow companies funded entirely by foreign capital in cases where the complexity or importance of the endeavour requires it, especially in the development of industrial infrastructure. The 1995 law also permitted this, although in practice the state maintained control of a 51 percent share in all joint ventures.

One of the touchiest aspects is employment, because foreign-owned companies would be required to hire local labour through a state agency, which would receive the wages in convertible hard currency and pay workers in the weakened peso.

“It is worrisome; investors would find cheap labour in Cuba,” said Díaz, the environmentalist.

Analysts say that from the definition of foreign investor, it can be inferred that Cubans living abroad could invest here.

“Many Cubans who live in the United States and have enough money are interested in investing in the fatherland,” Cuban nurse José Enrique Romero, who has lived in the United States for 35 years, commented to IPS. “But independently of the limitations of the embargo, they are worried about changes that will affect them.”

* With additional reporting by Ivet González.