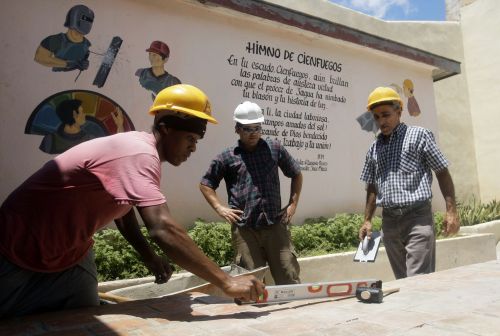 Cuba is working to increase the number of skilled workers in traditional areas like construction and agriculture. Credit: Jorge Luis Baños/IPS

HAVANA, Sep 21 2012 (IPS) - His carpenter’s certificate has made Antonio Tejero into a passionate champion of the trades, because, he says, he works “directly for society.” That attitude is in line with the government’s plan to train more technicians and skilled workers to give a boost to the economy.

“People who work in carpentry and construction are always needed,” says Tejero, 24, who is also trained as an accountant’s assistant. “But the traditions of many of these trades have been lost,” he commented to IPS.

The need for skilled workers is why the Education Ministry is prioritising technical and professional training during the new school year that began this month. More than 55 percent of the last group of students who graduated from secondary school enrolled in polytechnic institutes and trade schools.

Those who earn their certificates will contribute to the “economic and social development” of their communities, Education Minister Ena Elsa Velásquez told local reporters.

The reorientation toward vocational skills training is one of the main changes underway in the country’s education system, in line with the economic reforms that the government of Raúl Castro has been implementing since 2007. Other changes include a more rational use of resources, bolstering teaching staff and encouraging students to go into the sciences that will contribute to productive growth.

Higher enrolment and more skills training in vocational education are part of the changes that are being made with a view to a new economic horizon. According to a report made available to foreign correspondents in Havana, priority is being placed on education in areas such as agriculture, construction, accounting and rail transport.

The report, which was presented by Enia Rosa Torres, advisor to the education minister, says that the goal is to “ensure an adequate education pyramid.” This structure has a “base” formed by a “larger number of skilled workers,” followed by a smaller group of technicians, and topped by a yet smaller number of engineers.

Many Cuban families hold on to the dream of their children earning university degrees, even though the economic crisis in which the country has been sunk for the last two decades drove down wages in the state sector, which still accounts for most jobs and employs most of the Cubans who have higher education, although the current reforms involve cutting hundreds of thousands of jobs from the bloated public payroll.

During the most difficult period, people with medical, teaching and other university degrees migrated to other areas such as tourism and self-employment. Others alternated work in their professions with other occupations, some without permits, to increase their income and meet their needs.

That is why young people such as Thalía del Sol, 15, who is training to be an accountant’s assistant in Havana, say that university is “very difficult,” and that they are eager to be done with school and begin working as soon as possible.

“I began (my training) because I was enthused, and then I liked it. I hope that I can make a living from my profession,” she told IPS.

During the 2008-2009 school year, more students graduated from university than from technical and trade schools, a tendency that continued in the 2010-2011 school year, with 85,757 university graduates and 71,353 vocational graduates, according to the National Office of Statistics and Information (ONEI).

However, a larger labour force is needed for increasing production, especially of food, and to revive industry. In fact, experts say that Cuba’s workforce needs to be redistributed.

In 2008, just 39 percent of workers were employed in the production of goods and the rest worked in services, according to the ONEI.

Centres of development such as the petrochemical complex in Cienfuegos province, about 250 km from Havana, include training for young people. This mega-project is focused on the modernisation of an oil refinery that is currently processing 65,000 barrels of crude daily. The goal is to increase that figure to 150,000 barrels daily.

The Camilo Cienfuegos complex, which includes the participation of Venezuelan and Chinese capital, received an influx of 119 newly-trained technicians in December 2011. In three and a half years, the “5 de Septiembre” local institute trained the first group specialised in different areas of technology related to oil processing and mechanics.

Triana holds that Cuba could advance successfully along this path if it is able to combine “the advantages being offered by the market with those that have been acquired by the country throughout all these years.” His recommendations include adding Cuba’s “highly-educated workforce” to traditional production systems, such as agriculture.

Along with an increasing focus by secondary school career guidance counsellors on the trades, technical and professional education, authorities are increasing work-experience hours in 4,523 workplace-based classrooms. This way, students update their academic knowledge and abilities.

Despite these strategies, during the 2011-2012 school year, 4,778 job vacancies for skilled workers went unfilled, as did 800 positions for trained technicians, according to local press reports.

Nevertheless, 60,609 students enrolled in vocational training, a leap from the 2,077 who did so three years ago.

Denise Morales, an agronomy student, said that she, like many, chose vocational training as a path to university. “This way, I will be more prepared” when enrolling in university, she told IPS. “I’m very sure that I want to be an agronomist,” said the16-year-old from Mayabeque province, which borders Havana.