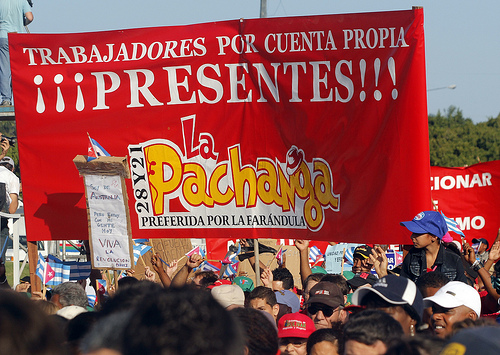 HAVANA, May 8 2012 (IPS) - A year after the Raúl Castro government approved a programme of changes and measures aimed at making the Cuban economic model sustainable, the slow pace of implementation is a focus of debate and criticism even among its supporters, who believe it should move forward more rapidly.

In April 2011, the Sixth Congress of the ruling Communist Party (PCC) officially approved the “Economic and Social Policy Guidelines of the Party and the Revolution,” with more than 300 short-, medium- and long-term policy goals. Some were already being implemented at the time, others were initiated in the months that followed and many are still waiting to be put into action.

“The changes should be sped up in some economic sectors,” economist Pável Vidal told IPS. “The best candidates for obtaining immediate significant results” through the new policies appear to be non-state forms of organising small-scale production, he said.

“Unlike large companies, small and medium-sized enterprises, together with cooperatives and agricultural producers, comprise a group that has a lot of flexibility and less inertia, no bureaucracy that is resisting changes, and a large capacity for adapting to a new framework of incentives,” Vidal said.

Among non-state forms of production, Cuban authorities are prioritising cooperatives, although new legislation announced for that sector is still being studied. “One of the aspects that apparently is being discussed is the scope or degree of autonomy that this type of association should have,” said a source who asked to remain anonymous.

University professor Reina Fleitas said that changes related to the workforce “should go slow,” to have as little of a negative impact as possible, especially in the case of women, “who, despite all of the progress, continue to be the most disadvantaged in terms of employment and wages.”

Given the complexity of the issue, the government relaxed a planned reorganisation of the labour force that was to involve the eventual elimination of up to one million state jobs. However, the number of people who have lost their jobs to date, their ages and their gender is unknown.

According to sources from the labour sector, some of the workers who were laid off accepted production-related jobs in the same state enterprise or opted to become self-employed, or private sector workers. This year, an anticipated 170,000 jobs that are considered superfluous or unproductive will be cut.

“It is essential to reduce payrolls, to be able to achieve efficiency and analyse deadweight and capacity to meet the plan and implement the budget, adjusting to what is available,” said Salvador Valdés, secretary general of Cuba’s labour federation, the CTC, in an interview prior to the May Day festivities.

Self-employed workers, who numbered more than 370,000 as of February, and about 80 percent of whom are union members, participated as part of that emerging sector for the first time this year in the parades held on May 1, International Workers Day. It is anticipated that their numbers will reach 600,000 this year.

That growth should be favoured by a gradual transition this year of state workers to private enterprise, in trades such as carpenters, photographers, and repairers of everything from jewellery, mattresses and other household items to electric and electronic equipment.

In addition, since late last year, private businesses have had access to loans from state banks, adding to channels for financing that include personal savings, remittances from abroad and informal financing sources.

In response to a question from Café 108, a website initiative of the IPS news office in Cuba designed to encourage citizen participation in investigative journalism, Prof. Fleitas said it was important to speed up the distribution of idle land, and to carry out the process with a gender-based approach.

In that sense, the sociologist and expert on gender, health and family said the proportion of women who own land was “too small.” She said it was necessary to raise awareness and create conditions in rural areas for women to become individual producers or members of cooperatives, but as owners or co-owners of their land.

According to official figures, in early 2011, women represented 23 percent of the total agricultural workforce of 1.3 million, including the state and cooperative sectors. At the same time, 11,249 women were reported as having received idle lands in usufruct, in line with Decree-law 259.

Under that legislation, in effect since 2008, the state has distributed 1.3 million hectares of land to private individuals and farming cooperatives, with the goal of increasing food production. According to official estimates, one million hectares are still available.

However, experts believe it is indispensable to introduce changes to that decree-law to eliminate factors that create uncertainty and discourage farmers. Possible changes that have been studied since last year include the eventual expansion of land that can be distributed, a longer period of usufruct rights, and the possibility of beneficiaries associating with different forms of production.

In late March, Marino Murillo, vice president of the Council of Ministers, said the goal was to extend cooperatives to non-agricultural sectors, which he did not identify. With respect to time-frames, he said only that the move was imminent.

In the government’s policy guidelines, which are like a roadmap, first-degree cooperatives (in which members are individuals or legal entities) are proposed as a socialist form of collective property in different sectors, for producing and providing services that are useful to society, and in which members are responsible for all expenses based on their income.