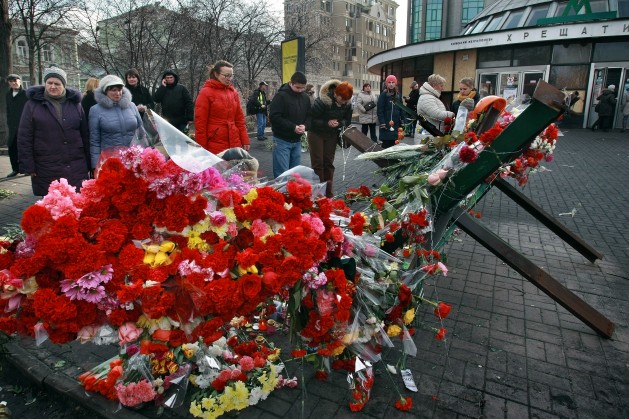 Flowers laid out in Kiev earlier this year for those who died in the Maidan protests. People who fought for change in Ukraine are hoping the new president will not let them down. Credit: Natalia Kravchuk

KIEV, May 30 2014 (IPS) - As Ukraine’s president elect Petro Poroshenko prepares to begin his presidency, Ukrainians are hoping he will not forget that separatist violence is just one of a long list of problems he needs to help solve in the country.

Poroshenko, a billionaire confectionary magnate, won a resounding victory in the first presidential elections this week following the revolution that saw his predecessor, Viktor Yanukovych, ousted in February.

But he comes to office with Ukraine in turmoil, having seen its territory annexed by Russia, separatists in the east of the country waging war, a collapsing economy and many activists and protestors who led the Maidan movement that paved the way for a new regime angry and confused at some of what has come to pass since their protests.

“As a Ukrainian citizen, I would hope to see my country developing as a free society that brings opportunities to hard working and honest people” – 32-year-old teacher Yury Shevtsov

And while most Ukrainians agree that unifying the country and putting a stop to the conflict in the east of the country is the new president’s top priority, they say that he must not ignore the many other challenges Ukraine is facing.

Yury Shevtsov, a 32-year-old teacher in Kiev, told IPS: “Getting some stability in the country is important but once the president has done that, as a Ukrainian citizen, I would hope to see my country developing as a free society that brings opportunities to hard working and honest people.”

Prior to the Maidan protests, many Ukrainians perceived the country’s institutions, from the presidency and parliament to the civil service down to the judiciary and police, as systemically corrupt. Nepotism and cronyism were seen as rife.

The country’s human rights record was dubious, with police brutality and persecution of minorities and other groups commonplace.

Third sector organisations, while not facing the kind of intimidation and persecution their peers in Russia or Belarus have been regularly subjected to, complained of obstructions to their work and a lack of cooperation from authorities.

Meanwhile, the economy has been slowly falling apart since the financial crisis, with already low living standards falling further. But despite this, the country’s leaders were seen to be only getting richer and consolidating their grip on power.

While the Maidan protest movement was originally a reaction to Yanukovych’s refusal to sign an Association Agreement with the European Union – seen as a first step on the road to greater European integration – it soon turned into a wider protest against the regime and its failings.

Protestors demanded an end to the corruption and other problems that blighted society, moves to fix the ailing economy and bring at least the hope of some prosperity to the country.

Analysts see Poroshenko’s unexpectedly resounding victory as a reflection of Ukrainians’ demand for change and a regime that will address the country’s problems as much as support for him as an individual candidate.

But they also say that Ukrainians must understand that the new president alone will not be able to effect the kind of changes the country needs.

Balazs Jarabik, a scholar at the Carnegie Endowment for International Peace in Washington, told IPS: “The urgent reforms which need to be undertaken are things like agreeing a deal with the International Monetary Fund to avoid bankruptcy, improving the business climate to attract investment, electoral reforms and decentralisation, curtailing bureaucracy and making state subsidies transparent and justified.

“But they need to be gradual reforms instead of radical ones which could fuel conflict instead of building [society]. There needs to be a lot of communication with, education of, and explanations given to, the average Ukrainian. But importantly, Ukrainians should understand that neither Poroshenko, nor the EU, will do the job for them. The participation of Ukrainians in the reforms is crucial.”

Some NGO groups have already started working with the interim government to help push through legislation related to reforms and say they are seeing important progress made. And Poroshenko has made it clear that he wants to make sure Ukraine signs the Association Agreement with the EU that his predecessor fatefully rejected.

But many Ukrainians are impatient to see some kind of visible improvement in their lives.

As Shevtsov told IPS: “People are fed up with uncertainty and tension and we definitely need some stability in the economy. Corruption, to name just one thing, urgently needs to be dealt with.”

However, economists are not hopeful that Ukrainians, many of whom live with an average wage of just 200 euros a month, will feel any economic improvement in the near future.

Vasyl Yurchyshyn, an economic analyst at the Kiev-based Razumkov Centrethink tank, told IPS: “Ukraine is facing some serious economic challenges over the next few months and there is potential for the recession to continue.

“I am not sure that anyone’s standard of living will be improved in the near future. But at the same time I believe that the government will implement reforms that will expand opportunities for growth and development. But it will be a year or so before any average Ukrainian would feel any difference.”

The progress of any reforms is also likely to be slowed by the violence in eastern districts.

Although most Ukrainians see unifying the country and ending the conflict with separatists as Poroshenko’s top priority, analysts say that concentrating solely on this could hurt the Ukraine’s prospects.

But many people in Ukraine continue to believe that it is only by dealing with the separatists – or their backers in Moscow – and bringing peace to a unified state that any rebuilding can begin.

Nadezhda Vlassovskaya, a 31-year-old accountant from Kiev, said: “Starting to talk to Russia officially is needed and by doing so I think that would bring some hope to Ukrainians that our new leader has started to sort things out.”