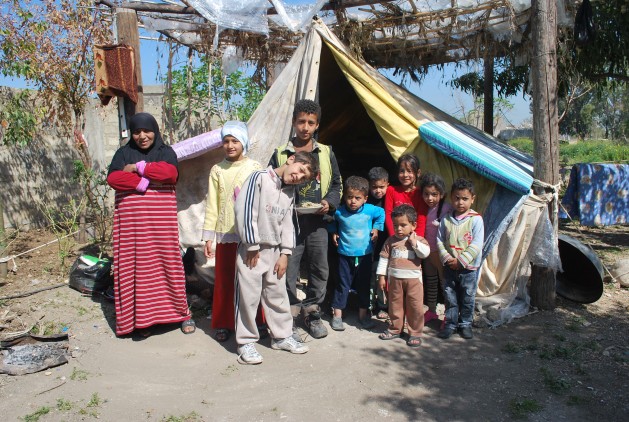 BEIRUT, Jul 6 2014 (IPS) - Tens of thousands of Palestinians living in Syria have been uprooted since the violent government crackdown on the uprising and the ensuing battles that ensnared their communities. For around 50,000 of them, Lebanon was their only safe route out but now it seems this door is being closed on them.

The family of 19-year-old Iyad was exiled from Palestine in 1948 upon creation of the state of Israel and fled to Yarmouk camp in Damascus, Syria, where they settled but violence and war have once again uprooted their community. Iyad now finds himself on the run from Syria, but his security in Lebanon is far from assured.

Having fled to Lebanon in December last year, Iyad was intent on traveling onto Libya and from there to make the perilous journey to the now renowned Italian island of Lampedusa. However, last month his plans were thwarted when the Lebanese security services detained him, along with 48 other young Palestinian men, as they tried to leave Lebanon through Rafiq Hariri airport in Beirut.

Trapped in a Kafkaesque labyrinth, more and more Palestinians are being forced to smuggle themselves across the border, putting themselves in the increasingly vulnerable position of living in Lebanon without valid papers.

After less than ten hours of investigation, the officials decided to deport the young men back to Syria because they did not have the correct papers. In taking this step the Lebanese authorities were reneging on a previous policy not to forcibly return any refugees fleeing the bloodshed next door.

What is more, border guards have the discretion to turn Palestinians back without referring back to the main authorities in Beirut. Trapped in a Kafkaesque labyrinth, more and more Palestinians are being forced to smuggle themselves across the border, putting themselves in the increasingly vulnerable position of living in Lebanon without valid papers.

Human Rights Watch has warned that the Lebanese government is violating the international principle of “non-refoulement”, which forbids states from returning asylum seekers or refugees to a place where their lives or freedom would be threatened.

“There is no way I can return to Syria, not under any conditions. I am of military age and I know they will take me into the army and make me carry arms and kill. I will not do it. I will not fire a gun in a fight that is not my fight,” said Iyad. He has since made his way back into Lebanon where he is lying low.

Mahmoud was among the group alongside Iyad, but now he talks of his fears of being snapped up by the Syrian security services if he crosses back into Syria. He does not have many options but he says he will “do the impossible” not to return to Syria.

“I know I am wanted by the Syrian security services and we all know what happens once you go into one of those places, it’s a one way ticket. They don’t even deliver the bodies to the family. They just tell them their son has died of an illness and that they are keeping the body,” he told IPS.

“We are worried that if they start deporting our youngsters and they are wanted by the security services on the other side then we know very well their fate is either prison or death. We need an answer to the question of Palestinian refugees fleeing Syria, especially as the one window they used to have was Lebanon,” said local human rights monitor, Alaa al Sahli.

The Lebanese government clearly has the right to defend its borders and the huge influx of refugees is putting immense strain on the country but the Palestinians desperate for some semblance of safety and security are asking why they are the ones being singled out.

The United Nations agency responsible for Palestinian refugees in the Middle East said it have been given assurances by the Lebanese government that the restrictions are only temporary but to date there has been no indication of a change of course. Dozens of Palestinian families have been separated or stranded with the change in the rules.

Nour came to Lebanon with her family around a year ago but with their finances drying up and no end of sight to the fighting in Syria they decided to try and emigrate as refugees to Europe.

Nour borrowed the equivalent of 400 dollars to travel back to Syria with her little daughter to fix all the papers that the family would need to travel to Europe. It was too expensive to travel with her husband and three other children so they stayed in Lebanon. Having jumped through all the bureaucratic hoops, Nour and her daughter returned to the border only to be refused entry by the Lebanese officials there.

“I don’t know what happened. It makes no sense. My husband and children are in Lebanon and I am here with my daughter. The border guard told me that I can’t get through and the rest of the family will have to come back to Syria if I want them to be with me, but what do they expect me to do? Take my family and go and live on the streets to face hunger and war and death?” she said.

A briefing issued on July 1 by Amnesty International highlights the desperate plight of families torn apart while trying to cross into Lebanon. Among others, the human rights organisation says that its research has found evidence of a policy to deny Palestinian refugees from Syria entry into Lebanon altogether – regardless of whether they meet the new conditions of entry.

This evidence includes a leaked document, apparently from the security services, instructing airlines using the main Beirut airport not to transport any traveller who is a Palestinian refugee from Syria to Lebanon, regardless of the documents they may hold.

“The Lebanese authorities must immediately end the blatantly discriminatory policies towards Palestinian refugees arriving from Syria. While the influx of refugees has placed an immense strain on Lebanon’s resources, there is no excuse for abandoning Palestinian refugees who are seeking safety in Lebanon,” said Sherif Elsayed-Ali, Head of Refugee and Migrants’ Rights at Amnesty International.

Palestinian refugees in Lebanon have always been marginalised, and often scapegoated, especially since their prominent role in Lebanon’s own protracted civil war from 1975 to 1990. Now, as the region is fracturing under the strain of the Syria conflict, they find themselves once again pilloried and punished for a war that was not of their making.