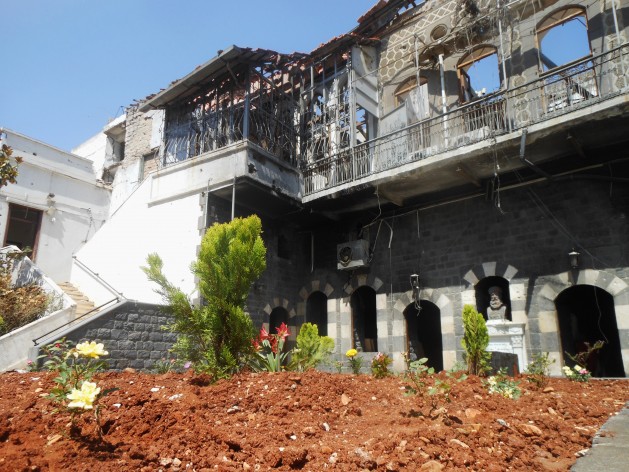 Volunteers have planted a garden in the courtyard of the burned St. Mary's Church in Homs. Credit: Eva Bartlett/IPS

HOMS, Syria, Jul 8 2014 (IPS) - Al-Waer, Homs’s most populated area and the city’s last insurgent holdout, might soon achieve the truce that Hom’s Old City saw in May this year when, in an exchange deal, the insurgents left their strongholds.

Today, Al-Waer’s population stands at more than 200,000, many of them internally displaced persons (IDPs) who fled their homes in other parts of Syria, only to find themselves caught in the middle of the efforts of the Syrian army to eradicate the armed militants.

Homs, Syria’s third largest city and dubbed in the media as the “capital of the revolution”, suffered nearly three years of the insurgents’ presence and the Syrian army’s fight to oust them and restore calm. By May this year, many areas had been destroyed by both army bombing and insurgent rockets and car bombs.

On May 9, 2014, Homs’ Governor Talal Barazi was reported as having declared Homs “empty of guns and fighters” and under a truce agreement, the roughly 1,200 insurgents who had taken over most of the Old City in early 2012 were bussed out and residents could finally return to their neighbourhoods.

Many of them [residents of Homs’ Old City] argued that what had happened in Homs was not revolution, as Dutch Jesuit priest Frans van der Lugt had argued before he was assassinated, just one month before Homs was liberated.

Some of those residents who had stayed on in the Old City of Homs during the siege talked to IPS about their ordeals and losses at the hands of armed groups, including Nusra and Farooq brigades. Many of them argued that what had happened in Homs was not revolution, as Dutch Jesuit priest Frans van der Lugt had argued before he was assassinated, just one month before Homs was liberated.

“I was baptised in this church, got married in it, and baptised my children in it,” said Abu Nabeel, a resident of Homs’ Old City. The St. George Church, with its crumbling walls, is one of 11 reported destroyed in the Old City. It no longer has its wooden ceiling and ornately-carved wooden ceiling panels and wall lattice lie in heaps outside the ancient church.

“Most of the damage is from the last days just before the insurgents left,” he said. “But we’ll rebuild.”That rebuilding has already begun, with residents scraping away rubble and re-paving small areas that had been damaged.

The arched interior of the St. Mary’s Church (Um al-Zinnar) bears the char marks of its burning by retreating insurgents. Like many others, the church was looted of objects and vandalised, with the insurgents leaving sectarian graffiti on the walls. “Symbols related to Christianity were removed. Even from inside houses. If you had a picture of the Virgin Mary, they removed it,” said Abu Nabeel.

Volunteers have now planted a garden in its courtyard, which they say is an attempt to “bring some beauty back” to Homs.

In the courtyard of the Jesuit church sat a lone plastic chair adorned with flowers and a photo of Father Frans van der Lugt, the Jesuit priest assassinated on April 7, 2014.

Nazim Kanawati, who knew and respected the Jesuit, arrived moments after the 75-year-old priest had been shot in the back of the head.”We were surrounded and under siege. This was the only place we could go to. Everyone loved it here,” he said. Like Father Frans, Kanawati refused to leave Homs while others fled. “I didn’t want to leave, I’m a Syrian, I had the right to be there.”

Although he chose to stay in the Old City, Father Frans was critical of the insurgents. In January 2012, he had written: “From the start I saw armed demonstrators marching along in the protests, who began to shoot at the police first. Very often the violence of the security forces has been a reaction to the brutal violence of the armed rebels.”

“People in Homs were already armed and prepared before the protests began,” said Kanawati. “If they hadn’t been planning for the protests from the beginning, the people wouldn’t have had the quantity of arms that they had.”

Abu Nabeel explained that in addition to the Hamidiyeh district where various old churches are to be found, Christians in other areas occupied by the armed insurgents also fled. “There were an estimated 100,000 Christians living in the Old City of Homs before it was taken over by terrorists. Most fled in February 2012. By March, only 800 had stayed, and by the end just over 100 remained,” he said.

The siege that the Syrian army enforced on the Old City in an attempt to drive out the insurgents had a drastic effect on the daily lives of those remaining. Before Homs was freed of the armed insurgents, who were also stealing from homes, life had become impossible. “There was food at the beginning, but it started to run out. At the end we had nothing, we ate whatever we could collect,” said Kanawati.

Mohammed, a Syrian from the Qussoor district of Homs, is now one of the reported 6.5 million internally-displaced Syrians.

“I’m a refugee in Latakia now. I work in Homs, two days a week, and then return to Latakia to stay at my friend’s home. I left my house at the very end of 2011, before the area was taken over by al-Nusra and al-Farooq brigades.”

He spoke of the sectarian nature of the insurgents and protests from the very beginning in 2011.

“I was renting a home in a different neighbourhood of Homs, while renovating my own house. Just beyond my balcony there were protests that did not call for ‘freedom’ or even overthrowing the ‘regime’.They chanted sectarian mottos, they said they would fill al-Zahara – an Alawi neighbourhood – with blood. And also al-Nezha – where there are many Alawis and Christians.”

The windows and door handle to the home of Aymen and Zeinat al-Akhras were missing, but the house itself was intact. Zeinat, a pharmacist, and Aymen, a chemical engineer, survived the presence of the armed men and the resulting siege on the Old City.

“Thirty-eight times they came to steal our food. The first couple of times, they knocked on the door, after that they just entered with guns. The last things they took were our dried peas, our cracked wheat, our olives, finally our avatar (wild thyme). We started to eat grass and whatever greens we could find in February, 2014, and that’s all we had till Homs was liberated,” Zeinat said.

“The last time they came all we had were some spices. I was putting the spices on the grass and weeds that we were eating at that point, to give themsome flavour. They even took the spices. They didn’t leave us anything.”

Meanwhile, despite the return of calm to Homs’ Old City, insurgents continue their campaign of car-bombing civilian areas of Homs. Tens were killed by car bombs and rocket attacks in June alone.Then, on June 26, the Nusra brigades, an al-Qaeda affiliate and one of the main factions which occupied Homs, is reported to have pledged allegiance to the Takfiri extremist Islamic State in Iraq and Syria(ISIS).

This allegiance to a group documented to have beheaded, mutilated, crucified and flogged Syrians and Iraqis gives more credence to Homs’ residents’opinion that the events in Syria are no revolution.