TOKYO, Jul 14 2014 (IPS) - In recent years, Japan has found itself it in a rapidly changing security environment. The global balance of power has shifted and various new threats have emerged within the region, including the development of weapons of mass destruction and ballistic missile systems that may soon be capable of delivering them.

These changes have sparked serious debate within Japan about how best to meet the changing security needs of the people of Japan and to protect their lives and livelihoods.

We see Japan’s “peace constitution” as an expression of high and universal ideals in international relations.

Some have gone so far as to suggest that Article 9 of the Constitution, which famously declares that, “the Japanese people forever renounce war as a sovereign right of the nation and the threat or use of force as means of settling international disputes,” must be fundamentally revised if we are protect ourselves and our national interests.

The Japanese government has long taken the position that while the right of self-defence is recognised by the Constitution, this can only be exercised in response to a direct military attack against Japan and the use of force must be limited to the minimum necessary to repel the attack.

Others have sought to expand this interpretation to mean that the Japanese Constitution does not prohibit any form of self-defence that is recognised as legal under international law, including forms of “collective self-defence” sanctioned, for example, by a United Nations resolution.

Taken to its logical conclusion, this could mean that Japanese troops would find themselves in combat roles in places far from the homeland. This would run counter to the pacifist spirit of the Constitution and Japanese people’s strong desire for peace. It could provoke grave concern among our Asian neighbors, who still bear the bitter memories of Japanese military aggression in the 20th century.

Since its founding in 1964, the New Komei party has remained dedicated to a peaceful path for Japan. Central to this is our commitment to the Japanese peace constitution as a self-willed undertaking by the Japanese people to refrain from any use of force beyond the minimum requirements of self-defence. We see Japan’s “peace constitution” as an expression of high and universal ideals in international relations, specifically, the peaceful resolution of conflict through diplomacy and dialogue. 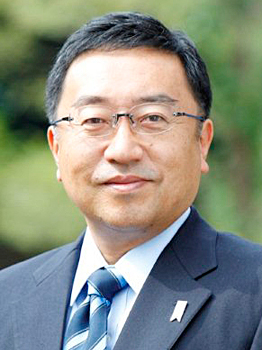 As members of the ruling coalition, we also have a responsibility to deal with the real challenges facing Japan, including questions in the security realm – how best to protect the lives and peaceful existence of the Japanese people.

In May of this year, we began deliberations with our coalition partners, the Liberal Democratic Party, on how to clarify the constitutional limits on self-defence in ways that contribute to deepening mutual trust within the U.S.-Japan Alliance and to stability within East Asia.

We approached these discussions with the determination to protect and preserve the underlying spirit of the peace constitution which, along with the U.S.-Japan alliance, has been central to Japan’s prosperity and security in the decades since the end of World War II.

At the outset, we insisted that any interpretation must be based on and logically consistent with past government interpretations. This, we argued, was essential if Japan was to be recognized as a nation of laws. Prime Minister Abe expressed his support for this approach at the beginning of the discussions.

On Jul. 1, agreement was reached on a Cabinet Decision which, among other things, establishes three core conditions limiting the use of force.

These are: 1) that an armed attack against a foreign country with which Japan has a close relationship produce a clear danger that Japan’s national survival will be threatened and its citizens’ right to life, liberty and the pursuit of happiness fundamentally undermined; 2) that there are no other appropriate means available to protect Japan’s citizens; and 3) that any use of force be kept to the minimum necessary.

These strictly defined conditions limit potential military actions to those that are genuinely necessary for Japan’s defence. They do not open the path to the overseas dispatch of Japan’s Self-Defence Forces (SDF) in the exercise of military force. The Cabinet Decision reaffirms Japan’s commitment to the three non-nuclear principles of not possessing, not producing and not permitting the introduction of nuclear weapons in its territory.

It also clarifies that Japan has no interest in becoming the kind of military power that would present a threat to other countries. Rather, the revised interpretation would enable a more closely coordinated response by Japan’s SDF and U.S. forces to situations arising in the country’s immediate vicinity that could gravely impact the nation’s peace and security.

This Cabinet Decision only provides guidance for future legislative measures. Such laws, which scrupulously define the limits of permissible action by the SDF, must be debated and adopted by Japan’s parliament to give effect to the new policy. We hope to use the process of legislative deliberation as an opportunity to inform world public opinion and gain wider understanding of Japan’s true intent in making these changes.

Among the goals stated in the Cabinet Decision is that “the Government, first and foremost, has to create a stable and predictable international environment and prevent the emergence of threats by advancing vibrant diplomacy…” In keeping with this, it adopts the policy that Japan should be a country that makes proactive contributions to peace. For the New Komei party, this means engaging in multifaceted diplomacy based on the spirit of the peace constitution.

Nowhere is such diplomacy more vitally important than with China, South Korea and our other neighbours in Asia. Over the decades, the New Komei party has engaged actively with our Chinese counterparts, seeking to maintain and develop the bonds of trust and friendship that can serve as the basis for mutually beneficial relations.

In January 2013, the leader of New Komei, Natsuo Yamaguchi, traveled to Beijing to meet with General Secretary Xi Jinping. He brought with him a letter from Prime Minister Abe and took the opportunity urge the early holding of a Sino-Japanese summit, stressing his confidence that differences between China and Japan can be resolved through persistent efforts at dialogue.

Ultimately, if Japan is to live up to the promise of our unique and remarkable constitution, it must be through an unwavering commitment to “advancing vibrant diplomacy” on many fronts. This must be our proactive contribution to peace.

Isamu Ueda is a member of the House of Representatives of the Japanese Diet, and chairs the international committee of the New Komeito party, a junior partner in the coalition government headed by Prime Minister Shinzo Abe of the Liberal Democratic Party. He was one of the members in the recent discussions on security issues between the coalition parties.