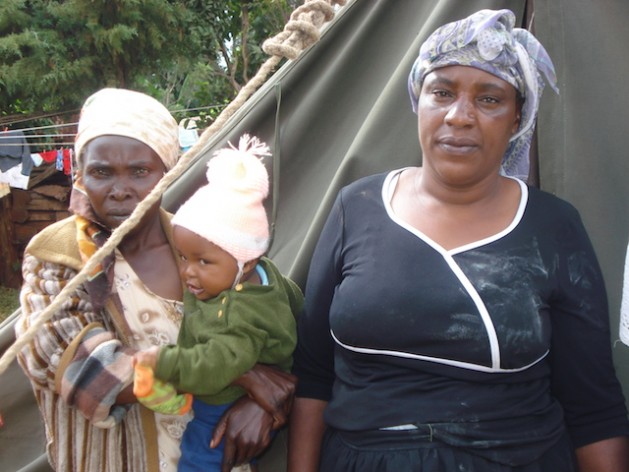 Some of the Kenyans who were forcefully evicted from their homes in Rift Valley during the 2007/2008 post-election violence. They are pictured in a dated photo in a camp in Kiambu Central Kenya. Credit: Miriam Gathigah/IPS

NAIROBI, Aug 27 2014 (IPS) - Mary Wacu lived in the Rift Valley region for 10 years prior to the 2007/08 post-election violence that rocked Kenya after a disputed general election.

“My husband was shot with a poisoned arrow, and my children hacked to death. Everything was burnt to ashes, I barely escaped with my life,” she tells IPS.

According to human rights organisations, the violence in this East African nation left an estimated 1,500 people dead and resulted in the rape of 3,000 women and the displacement of 300,000 people.

From her shanty in the sprawling Kibera slums, in Nairobi, Kenya’s capital, Wacu follows the proceedings of the cases for crimes against humanity levelled against President Uhuru Kenyatta, his deputy William Ruto and journalist Joshua Sang at the International Criminal Court (ICC) in the Netherlands.

But here in Kenya, like many who bore the brunt of the unprecedented violence, justice remains beyond Wacu’s reach. It is a scenario that is all too familiar in Africa’s conflict-prone countries like Sudan and the Democratic Republic of Congo.

Against this backdrop, civil society organisations (CSOs) in Africa as well as international ones working on the continent, have opposed the recently-adopted Protocol on Amendments to the Protocol on the Statute of the African Court of Justice and Human Rights by the African Union (AU) member heads of states in June.

The protocol extends criminal jurisdiction to the African Court, and offers immunity to serving heads of states and all senior government officials during their term of office for serious crimes. The African Court was established by African countries to ensure protection of human and peoples’ rights on the continent.

A source from Malawi attending the just-concluded meeting to promote ratification of AU treaties, which was held in Nairobi by the AU Office of the Legal Counsel on the 25 and 26 of August, explains to IPS that the amendments include an immunity provision for heads of states or governments and certain senior state officials for serious crimes against humanity.

The contentious article 46A categorically states that no charges shall be commenced or continued against any serving AU head of state or government, or anybody acting or entitled to act in such capacity.

“Lifting immunity for sitting officials for serious crimes committed is an assurance to African leaders that they are above the law,” the source says.

AU officials at the meeting, however, refused to comment to IPS on the protocol.

Malawi has taken the lead in mobilising other CSOs across Africa to tell their governments that the immunity provision is a blatant disrespect for human rights.

The source says that with a number of African leaders already under the radar of the ICC, “an immunity provision is offering African leaders the licence to abuse their people. It will further entrench dictatorship since many leaders will be afraid of being indicted when their term ends.”

The civil society community says that the African Court was moving in the right direction, until now.

Edigah Kavulavu, of the Kenyan Section of the International Commission of Jurists, tells IPS that the adopted protocol is the first legal instrument to extend a regional court’s authority to criminal jurisdiction “regional courts often deal with human rights issues, which are matters of a civil nature.”

He says that the African Court can now try cases of a criminal nature, including genocide, war crimes, and crimes against humanity.

He points out that the main bone of contention with the protocol is the immunity provision. Article 46A, Kavulavu says, is in breach of the principles that govern human rights.

“Through ICC and other regional courts such as the Special Court for Sierra Leone, these courts complement each other so that they can bridge the impunity gap,” he explains.

James Gondi of the Kenyans For Peace With Truth and Justice, a coalition of over 30 Kenyan and East African legal, human rights, and governance organisations, tells IPS that international criminal law and international justice demand that “those bearing greatest responsibility are often head of states, heads of military and high level elites who plan, finance and coordinate criminal acts [be held to account]. The amendment is meant to serve the interests of these three categories of people.”

The human rights lawyer further says that immunity negates the principles of transparency and accountability, respect for the rule of law and for humanity.

He says that the immunity provision is a display that African leaders are immune to the criminal justice system.

Gondi says that the objective of the criminal justice of which the African Court now has mandate is and should be to “deter future atrocities and to end impunity.”

The lawyer says that the regime of law has developed such that immunity for heads of state is lifted in many national and international laws where crimes committed are so heinous that the law cannot turn a blind eye.

African countries with national laws that rule out immunity for sitting officials for serious crimes include Benin, Kenya, Burkina Faso the Democratic Republic of Congo and South Africa.

Gondi says that while the general principle of the law is that “we cannot give immunity for crimes against humanity because they are so grave. The law is an issue of politics and politics are defined by impunity and political will.”

Moving forward, Gondi says that there must be a concerted international and regional effort to end impunity and the political will to drive these efforts, “citizens must also demand for accountability from their leaders.”

The Malawi source urged CSOs to lobby, protest and campaign to have their governments reject the adoption and continue with sustained campaigns.