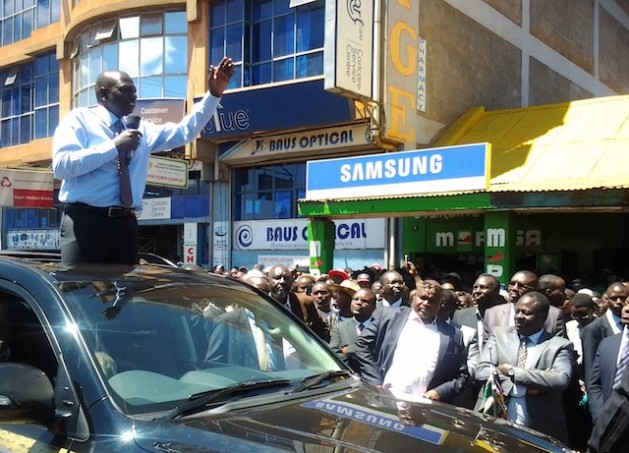 William Ruto addressing a crowd in Central Kenya, during an unexpected break in his trial that begun Sept. 10. He is confident that charges against him will be dropped. Credit: Miriam Gathigah/IPS

NAIROBI, Sep 17 2013 (IPS) - As Kenya’s deputy president William Ruto and co-accused journalist Joshua Sang resumed their trial for crimes against humanity at the International Criminal Court (ICC) on Tuesday, Sept. 17, many in this East African nation were debating if the trial will continue to its end as four more witnesses withdrew from testifying on Sept. 15.

Javas Bigambo, a political analyst with Interthoughts Consulting, a consultancy on governance, leadership and policy, told IPS that that the progressive withdrawal of witnesses might lead to the collapse of the case sooner rather than later.

The start of Ruto’s trial on Sep. 10 was delayed due to the absence of a key prosecution witness from the Rift Valley Province. Ruto is facing charges of murder, and the forceful transfer and persecution of people during the violence that followed Kenya’s disputed 2007 presidential elections. An estimated 1,300 people were killed, 3,500 were wounded, and more than 600,000 people displaced from their homes during the conflict. He has pleaded not guilty to the charges.

The first witness took the stand on Tuesday, but she gave her testimony as a number of other witnesses withdrew from the case. By the start of the trial last week, the prosecution witness list had dwindled to 20 names from the original 42. An additional four withdrew on Sept. 15, two days before the trial resumed.

Bigambo said that the “sudden and premature adjournment of the Ruto trial speaks to the disarray in which the [ICC] Office of the Prosecutor is.”

“Why is it that only witnesses lined up in the Ruto and [Kenyan President] Uhuru Kenyatta’s cases are withdrawing and not Sang’s? It’s possible that they are both using scorched earth methods [destroying anything that is useful to the prosecution] with a view to have the cases dismissed on grounds of incompetence of the prosecution. In which case, the allegations would be declared frivolous and malicious,” Bigambo said.

Other witnesses were expected to testify how Ruto and Sang allegedly took advantage of the existing tensions and suspicions among the Kalenjin and the Kikuyu community to incite the post-election violence. Both accused are from the Kalenjin community.

ICC chief prosecutor Fatou Bensouda had been quoted in the media as saying that the fact that there were still prosecution witnesses to testify in the trial was a miracle as they had been intimidated.

But those affected by the violence have been watching events unfold with in a increasing concern that justice will not take its course. During the post-election violence Sally Musa was raped and her house in Nairobi’s Mathare slum was burnt down in early 2008.

“I have a five-year-old daughter from the [rape] and we are both HIV  positive. At the beginning, people were talking about the victims but  we have been forgotten,” Musa, who now lives in Kariobangi, another informal settlement in Nairobi, told IPS.

“The case is now Ruto against the ICC. And Kenyans  are supporting Ruto or the ICC, but people died, we lost our homes. I became  pregnant, no one is talking about that. My joy is not in seeing Ruto  jailed, but in knowing that there is justice.”

Vincent Kimosop, chief executive officer of local NGO the International Institute of Legislative Affairs, told IPS that the adjournment and withdrawals of witnesses “are cause for alarm.”

“Perhaps the witness protection is faulty and the witnesses have been identified [by people beyond the ICC Office of the Prosecutor], in which case they [witnesses] would have cause to drop out of the cases. The prosecution must address this issue or they will soon have no witnesses to testify,” he said.

Kimosop added that the “profile of Ruto and Uhuru Kenyatta makes the work of the prosecutor difficult.”

Ruto’s aides, however, have accused the prosecution of coaching witnesses.

“We know that prosecutor Bensouda is relying on fabricated stories and the so-called witnesses are no longer willing to participate in this saga,” an official in the office of the deputy president told IPS on the condition of anonymity.

“It’s no secret that the prosecutor is relying on hearsay from partisan busybodies in civil society who are being used by opposition politicians to fabricate stories and coach so-called witnesses in order to settle political scores,” he added.

The official stressed, however, that Ruto would continue to co-operate with the ICC.

“He has always been willing to co-operate. But from what we saw during the opening of the trial, this case is going to crumble sooner than expected,” he said. “When the cases crumble, and they will, the prosecution will have blood on their hands for shortchanging victims of this violence by ignoring the real culprits of these crimes.”

Ruto is not without support. Tanzania, Eritrea, Uganda, Burundi and Rwanda have written to the ICC asking the court to give Ruto time off from the trial to enable him to conduct his duties as deputy president.

On Sept. 10, a divided Parliament and Senate passed a motion to withdraw Kenya from the Rome Statute of the ICC. It will take one year for the withdrawal to take effect, and it will have no impact on the ongoing ICC cases.

“The ICC withdrawal will further alienate Kenya from the West. If the five billion dollars that China gave the government is anything to go by, the West is still the best partner,” political analyst Ken Wachira told IPS. “With no other partners, support from China alone will not be enough.”

But as the uncertainty about the continuation of the ICC case rages on, Kenyans are keenly following the live televised trial.

Many told IPS that they have taken leave from work to watch it. Even those in Kenya’s sprawling slums like Kibera and Mathare, where there is no electricity, have been watching. “We will watch the trial in local bars, this is bigger than a football match,” Collins Otieno, a Kibera resident, told IPS.

“Every other day we are told that a witness has dropped out. This case could collapse if the trend continues unless Bensouda can continue without witnesses,” he added.