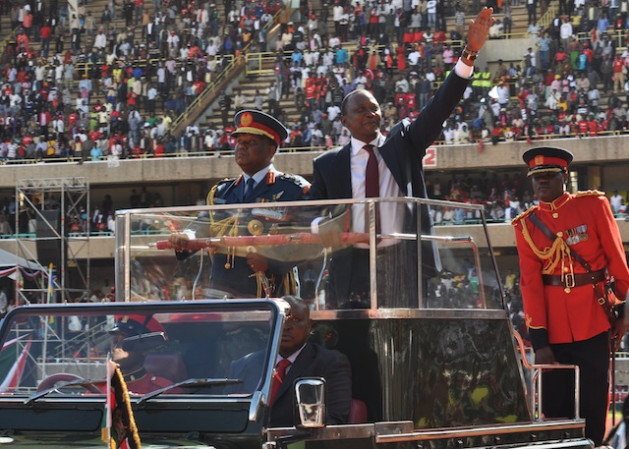 Kenya's new President Uhuru Kenyatta on a military land rover acknowledges greetings from supporters after he was sworn in at the Moi International Sports Centre on Apr. 9. Credit: Brian Ngugi/IPS

NAIROBI, Apr 16 2013 (IPS) - Kenya’s newly sworn-in President Uhuru Muigai Kenyatta may be faced with a number of challenges, including an impending International Criminal Court case and a slow economy. But he must also tackle corruption and ethnic divisions as he embarks on his five-year term as head of state of East Africa’s largest economy.

This is according to newly-elected senator Bonny Khalwale, from Kakamega county in western Kenya.

Khalwale, who is a prominent anti-corruption crusader, told IPS: “What divides this country is not our tribes, it is the unequal distribution of resources, which has ensured that a section of tribes feel alienated.”

Land was one of the biggest issues during the violence and at the time an economics professor at the University of Nairobi, who asked for anonymity, told IPS that the state had “showed a blatant bias in favour of one tribe at the expense of the rest at the time of independence when the land left behind by the British was to be distributed among the local people.”

A 2009 United Nations Development Programme (UNDP) Human Development Report ranked Kenya as one of the most unequal societies in the world, as 30 percent of the population here live in poverty. The report further revealed that the country’s top 10 percent of households control 42 percent of total income, while the bottom 10 percent control less than one percent.

Ndung’u Wainaina, the executive director of the International Centre for Policy and Conflict (ICPC), said Kenyatta should fully implement the constitution without seeking “to circumvent it.”

“With the help of the constitution they (Kenyatta and and his deputy, William Ruto) have to tackle the unfinished issues of equal distribution of resources and land, that partly led to Kenyans turning against each other in 2007,” Wainaina told IPS.

Prior to Kenyatta’s win, the ICPC went to court to question whether the integrity rules of the Kenyan constitution could prevent him and Ruto from participating in the election in light of their ongoing cases at the ICC.

Both are facing charges for crimes against humanity, which were allegedly perpetuated during the 2007 post-election violence. But they have made a number of economic pledges to Kenyans in the run-up to the elections.

In his inaugural speech at the Moi International Sports Centre on Apr. 9, Kenyatta said he would fulfill the promises, which include improving primary healthcare and education, and creating one million jobs a year for the youth. Some 36 percent of Kenya’s 41.6 million people are between 15 and 35 years old, according to the UNDP report.

But regulation and competition policy expert at local think-tank the Institute of Economic Affairs Kenya, David Owiro, told IPS that although the promises are largely in tandem with the country’s needs, they lacked a clear implementation framework.

“It’s real hard to see where the money will come from for most of the projects they promised.

“The government is going to struggle to meet public sector commitments given the prevailing status of the economy,” Owiro said.

Kenyatta also promised seven to 10 percent economic growth over the next two years. He had said that in order to achieve this, his administration would focus on improving the manufacturing industry and increasing agricultural production through equitable access to land.

Owiro added that most of these pledges were very broad and capital intensive and it was not clear how Kenyatta’s government would implement them.

Nairobi economic analyst, Abdi Mohammed, told IPS that within the current economy it might be difficult for the Kenyatta administration to meet their pledges. According to the International Monetary Fund, Kenya’s economy grew between 4.5 and five percent in 2012.

“Unless Kenyatta’s administration is banking on the oil Kenya has discovered, which if proved to be commercially viable could be an economic game changer, relying on sectors like agriculture and tourism to deliver growth without bringing them up to speed by investing in them is a hard call,” Mohammed said.

Mohammed said that balancing the country’s widening development and recurrent budgets to promote growth would be a monumental task. He added that the highest growth the Kenyan economy has ever reached was seven percent in 2006.

“The cost of devolution has further inflated the wage bill and from a resource allocation perspective it is hard to get all sectors growing at such a pace,” he said. From midnight on Mar. 5, Kenya implemented a new devolved system of government and with the new system decisions affecting Kenya’s 47 counties will now be taken at local, as opposed to national, level.

According to political scientist Professor Edward Kisiangani of Kenyatta University, Kenyatta takes over at a time when the nation is sharply divided and plagued by challenges, including entrenched corruption and pervasive poverty.

“The president must reach out to all communities, even those who did not vote for him, so as to unite the country after the deeply-divisive general election and the presidential petition soon after,” Kisiangani told IPS.

According to Transparency International Kenya, a governance and accountability NGO, the country still ranks as one of the most corrupt in the world

Its 2011 Corruption Perceptions Index ranked Kenya 154 out of 182 countries that were surveyed – it is in the same position as Zimbabwe, and only slightly higher than war-torn Somalia, and North Korea, which were ranked most corrupt at 182.

Morris Odhiambo, the president of the National Civil Society Congress, a consortium of local governance lobbies, told IPS that Kenyatta and his administration must demonstrate a clear will to fight corruption.

“If Kenyatta does not seriously fight corruption by starting off with unearthing past major corruption scandals like the Goldenberg scandal, which led to suffering of Kenyans, he will go down in ignominy just like other past presidents,” Odhiambo said.

The 1992 600-million-dollar scandal involved the exportation of gold from Kenya in exchange for high government subsidies. It remains one of the largest corruption scandals to date as it involved nearly the entire government of former President Daniel Arap Moi.