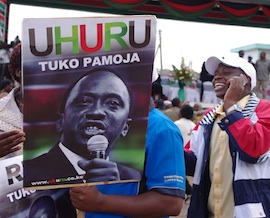 Unlike at past rallies, however, the suspects – Finance Minister Uhuru Kenyatta and suspended Higher Education Minister William Ruto – threw veiled rather than direct barbs against their chief political rival, Prime Minister Raila Odinga. Other speakers said any suggestions the two politicians had previously engaged in hate speech were baseless.

On Apr. 7, Judge Ekaterina Trendafilova said the ICC was concerned “that there are some movements towards re-triggering the violence in the country by way of using some dangerous speeches.”

The court has summoned six suspects in connection with the 2007-2008 violence, which claimed more than 1,000 lives. Trendafilova warned all six, who appeared at the ICC for the first time last week, that further use of inciting language could prompt judges to substitute the summonses with arrest warrants.

She was not the first to take issue with the language of some of the suspects. In the weeks leading up to the ICC appearances, as Kenyatta and Ruto staged a string of rallies as part of a nationwide “prayer tour,” concerns about the content of their speeches were raised by a number of civil society groups, as well as by former Kenyan President Daniel arap Moi and former U.N. Secretary General Kofi Annan.

Earlier this month, the National Cohesion and Integration Commission said it was investigating politicians who allegedly incited crowds while speaking as part of the  tour.

An Apr. 3 article in Kenya’s Daily Nation newspaper referred to multiple examples of inciting statements made by Kenyatta. At a rally in Githunguri, he reportedly said: “Now that Raila keeps describing some of us as drunkards, do we go drinking with his wife? And now that he keeps telling us to go to The Hague, is that Hague his mother’s place? Is The Hague your mother’s place for you to keep singing about it?”

Kenyatta was also quoted as saying, “We don’t have a problem with the people of Nyanza [province], but with one man, and you know who he is” – an obvious reference to Odinga.

On Monday, though, the language employed by both Ruto and Kenyatta was decidedly tamer.

Ruto began with an appeal for peace, saying, “Never again shall a Kenyan lose his life or his property due to political competition.”

He allowed himself only one slight dig at Odinga, saying, “Kenya’s problems cannot be solved by parables,” a reference to a favoured rhetorical device of the premier’s.

Kenyatta followed in much the same vein, thanking the 5,000-strong audience gathered in Uhuru Park in downtown Nairobi – some of whom hoisted banners reading “President Uhuru” and “Welcome Back Our Hero Uhuru” – for their support and declaring, “I don’t want to speak with anger but with patience.”

Later, he said, “The international community should not meddle in Kenyan affairs. We have enough capacity to solve our problems.” This was a rebuke – albeit a subtle one – of Odinga’s proposal to bring in the Federal Bureau of Investigation or Scotland Yard to probe the post-election violence cases.

Not every speaker matched the suspects’ civility. Mohamed Ali Mohamud, a parliamentarian aligned with Ruto and Kenyatta, blasted Odinga’s Orange Democratic Movement for complaining about alleged hate speech in a letter to the ICC, and vowed to write a letter of his own defending the suspects.

Two speakers later, Rafael Wanjala, a former MP, went so far as to place all blame for the 2007-2008 violence – which began after Odinga was declared the loser in a close race with incumbent President Mwai Kibaki – squarely at the prime minister’s feet.

“People fought because of Raila. Raila is a very dangerous man,” Wanjala said.

Following hearings scheduled for September, judges will decide whether to confirm the charges and commit the suspects to trial.