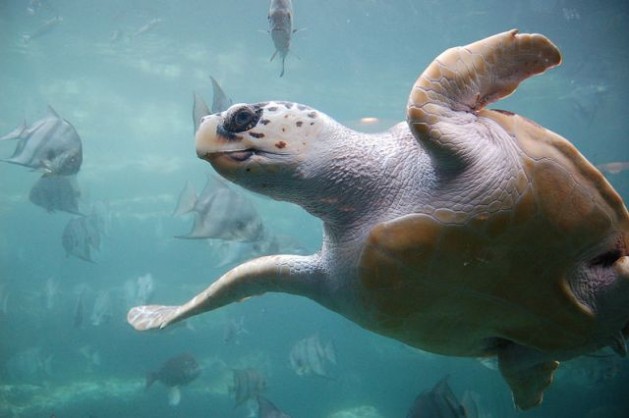 The move would create giant havens where fish, turtles and birds could reproduce unhindered and edge back to their natural levels. Credit: ukanda/cc by 2.0

WASHINGTON, Aug 15 2014 (IPS) - U.S. President Barack Obama has proposed to more than double the world’s no-fishing areas to protect what some call America’s underwater Serengeti, a series of California-sized swaths of Pacific Ocean where 1,000-pound marlin cruise by 30-foot-wide manta rays around underwater mountains filled with rare or unique species.

Obama announced in June that he wants to follow in the steps of his predecessor George W. Bush, who in 2010 ended fishing within 50 nautical miles of five islands or groups of islands south and west of Hawaii. Bush fully protected about 11 percent of their Exclusive Economic Zone (EEZ), a total of 216,000 km2, by declaring them marine national monuments under the Antiquities Act, which does not require the approval of Congress.

“This would be by far single greatest act of marine conservation in history.” -- Fisheries scientist Daniel Pauly

Obama is expected to use the same tool to extend the ban to 200 nautical miles and protect the rest of the EEZs, or a whopping 1.8 million km2. Given that the only two other giant fully protected areas, the U.K.’s Chagos Islands in the Indian Ocean and the U.S. Northwestern Hawaiian Islands, total about one million km2, Obama would more than double the no-take areas of the world’s oceans.

“This would be by far the single greatest act of marine conservation in history,” said Daniel Pauly, a prominent fisheries scientist at the University of British Columbia. “It’s particularly welcome because overfishing is shrinking the populations of fish almost everywhere.”

By increasing the number of fish, the closure would boost genetic diversity, which will be increasingly valuable as marine species adapt to an ocean that is becoming warmer and more acidic at unprecedented speeds, he explained. The area is rich in sea-mounts, underwater mountains where species often evolve independently.

The move would create giant havens where fish, turtles and birds could reproduce unhindered and edge back to their natural levels. The Pacific bigeye tuna population, the most prized by sushi lovers after the vanishing bluefin, is down to a quarter of its unfished size, according to official estimates, and calls for reducing their take have been ignored.

The five roundish EEZs are called PRIAs, for Pacific Remote Island Areas. They are: Wake Atoll, north of the Marshall Islands; Johnston Atoll, southwest of Hawaii; Palmyra and Kingman Reef, in the U.S. Line Islands south of the Kiribati Line Islands; Jarvis, just below, and Howland and Baker, which abut Kiribati’s 408,000 km2-Phoenix Islands Protected Area. President Anote Tong has pledged to end all commercial fishing in the Phoenix protected area by Jan 1, 2015. The two areas together would create a single no-take zone the size of Pakistan, by far the world’s biggest.

None of the islands have resident populations. Palmyra has a scientific station with transient staff and Wake and Johnson are military, with small staffs. The others are uninhabited.

“These islands are America’s Serengeti,” said Douglas McCauley, a marine ecologist at the University of California at Santa Barbara who once worked as an observer on a long-lining vessel based in Honolulu. “That’s where you can still find the grizzlies and the buffaloes of the sea.”

In Honolulu Monday, a public hearing recorded testimony from opponents and supporters. Though only four percent of the take of the Hawaii fleet in 2012 came from PRIAs, criticism from fishermen ran strong. A local television station headlined its story, “It’s designed to protect the environment, but could it put local fishermen out of business?”

Opposition was led by the Western Pacific Fisheries Advisory Council, known as Wespac and controlled by the local fishing industry. Wespac issued a report citing the “best available scientific information” that asserted the closure was unnecessary because, it claimed, the fisheries in the five areas, which are open only to U.S. vessels, were healthy and sustainable.

Like many academics, McCauley, the ecologist, disagreed. He pointed to official statistics that show the Pacific tuna, the world’s most valuable fishery, are becoming smaller and fewer, the result of the same kind of overfishing that pummeled populations in the other tropical oceans.

John Hampton, the Central and Western Pacific fishery’s chief scientist, analyses whole stocks – in this case Pacific populations of skipjack, bigeye, albacore and yellowfin, along with billfish like marlin and swordfish. He said closing even such large areas won’t help because the fish move around the entire ocean.

But studies have shown that varying percentages of tuna are actually quite sedentary and stay inside PRIA-sized areas; most Hawaii yellowfin, for instance, stay within a few hundred miles of the islands.

McCauley pointed to statistics collected by the U.S. National Marine Fisheries Service that show that the number of fish caught per 1,000 hooks by long-line vessels is higher in the PRIAs than in non-U.S. waters. For skipjack and albacore tuna, the ratio is two to one, and for yellowfin it’s six to one.

“This indicates that there’s already more fish inside the PRIAs, which illustrates that if you fish less, the population increases,” he said.

Alan Friedlander, a marine ecologist at the University of Hawaii, said even seabirds, the category of birds undergoing the steepest decline, would benefit from a ban on fishing.

Many species depend on tuna and other predators that feed on schools of small fish by driving them to the surface, where the birds can pick them off. “If you have more tuna, there’s going to be more prey fish driven to the surface and that will help the sea birds,” Friedlander said.

McCauley agreed and noted that historically, efforts to prevent the complete collapse of overfished species had focused on the species themselves.” “But by closing giant areas like these, you allow the ecosystem to become whole again,” he said.