Rich Countries Pony Up (Some) for Climate Justice 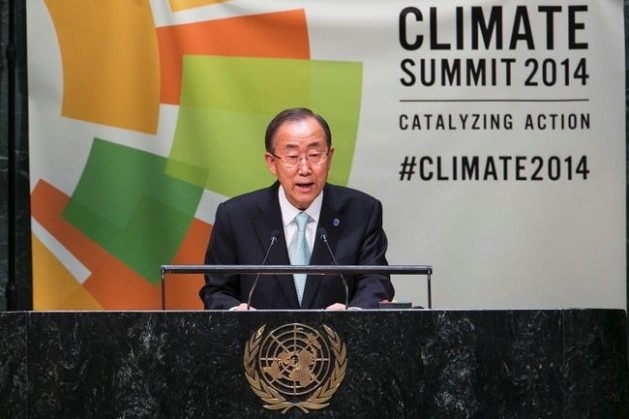 WASHINGTON, Nov 26 2014 (IPS) - It’s one of the oldest tricks in politics: Talk down expectations to the point that you can meet them.
And it played out again in Berlin as 21 countries—including the United States—pledged nearly 9.5 billion dollars to the Green Climate Fund, a U.N. body tasked with helping developing countries cope with climate change and transition to clean energy systems.

Floods, droughts, sea level rises, heat waves, and other forms of extreme weather are likely to cost developing countries hundreds of billions of dollars every year. And it will take hundreds of billions more to ensure that they industrialise more cleanly than their counterparts did in North America, Europe, Japan, and Australia.

Developed countries should foot a large part of that bill, since they bear the greatest responsibility for causing climate change.

The politics of responsibility

Determining who pays for what is an integral part of achieving an international climate deal. And so far, pledges from rich countries have tracked far behind previous requests and recommendations.

Back in 2009, developed countries signed the Copenhagen Accord, which committed them to move 100 billion dollars per year by 2020 to developing countries. A year later, the U.N. climate conference in Cancún called for the Green Climate Fund to be set up to channel a “significant share” of the money developing countries need to adapt to climate change.

Earlier this year, the G77—which is actually a grouping of 133 developing countries—called for 15 dollars billion to be put into the Green Climate Fund. U.N. climate chief Christiana Figueres set the bar lower at 10 billion dollars. The failure to even reach that figure is likely to put strain on negotiations for a new multilateral climate agreement that is expected to be reached in December 2015.

But it’s not just the headline figure that’s important. Plenty of devils are likely to be lurking in the details.

Delivering on the U.S. pledge requires budgetary approval from a hostile Congress, although a payment schedule stretching over much of the next decade could make that more politically feasible than it initially sounds.

More concerning are the conditions attached to the U.S. pledge, which include a threat that some of the money could be redirected to other funds—likely those run by the World Bank—if “the pace of progress” at the Green Climate Fund is inadequate. Given that the United States is advocating rules on how the fund makes decisions that would tip the balance of power in favor of contributor countries, the threat is far from innocuous.

France will provide a significant proportion of its share as loans rather than grants, while the small print of the UK contribution is likely to reveal that part of its money comes as a “capital contribution,” which can only be paid out as loans.

Those restrictions could limit the scope of activities that the fund can finance, since much of the vital support and infrastructure needed to support community resilience in the face of climate change is too unprofitable to support loan repayments.

Future of the fund

Looming over these issues is the larger, unresolved question of what the fund will actually finance. Some donor countries—including the United States—are pushing for a fund that would support transnational corporations and their supply chains, helping them turn profits from investments in developing countries.

Despite its green mandate, the Green Climate Fund may also support an array of “dirty energy” projects—including power generation from fossil fuels, nuclear power, and destructive mega-dam projects. That’s the subject of an ongoing dispute on the fund’s 24-member board and a persistent complaint from a range of civil society organisations.

That battle is not yet lost.

Despite its shortcomings, the Green Climate Fund has great potential to support a global transition to renewable energy, sustainable public transport systems, and energy efficiency. And with its goal of spending 50 percent of its funds on “adaptation” activities, it could also serve as a vital lifeline for communities already facing the impacts of climate change.

An important milestone was passed with the billions pledged to the Green Climate Fund. But achieving a cleaner, more resilient world will take billions more—along with a commitment to invest the money in projects that mitigate climate change rather than cause it.

This article is a joint publication of Foreign Policy In Focus and TheNation.com.