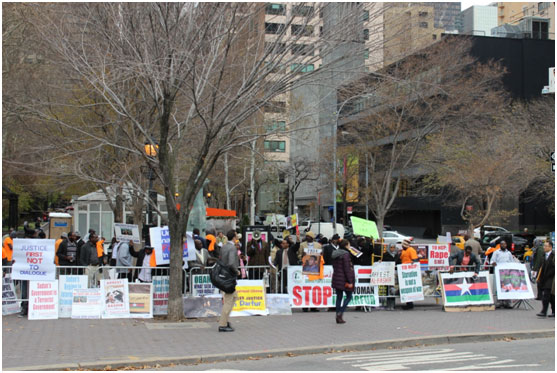 UNITED NATIONS, Nov 25 2014 (IPS) - The United Nations marked the International Day for Eliminating Violence against Women with the colour orange.

New York City buildings, including the United Nations headquarters and the Empire State Building were last night illuminated in orange. The campaign aims to bring attention to what U.N. Women Executive Director Phumzile Mlambo-Ngcuka described as a “massive and pervasive human rights violation.”

Sudanese community members also marked the day with a demonstration outside U.N. headquarters to raise awareness about ongoing violence against women and girls in their home country.

In light of an alleged mass rape of 200 women in Tabit last month, Sudanese community members called on the United Nations and the international community to investigate and to hold the Sudanese government and those responsible accountable.

Hawa Abdallah Mohammed Salih, a Sudanese activist, and the 2012 recipient of the International Woman of Courage Award, told IPS: “We came here today to tell the international community, the U.N. Security Council and the U.S. government about the violence against women in Darfur and in Sudan.”

“Our girls need immediate action,” she said. “It has been 12 years and the genocide in Darfur is still going on. Women are killed every day. And women are raped every day.”

Salih called on The African Union-United Nations Hybrid Operation in Darfur (UNAMID) to protect women and bring peace to Sudan and Darfur and for those responsible to be taken to the International Criminal Court.

Mohamed Ebead the President of the Darfur People’s Association told IPS: “We are here because of the mass rape on October 31st in a city called Tabit in North Darfur. We want to push the U.N. to do something to have an investigation about the mass rape .”

The UNAMID investigation into the alleged rapes has been hindered by the ongoing heavy presence of military and police in the town of Tabit. U.N. Secretary General Ban Ki-moon has asked the Government of Sudan to grant “unfettered access” so that the alleged rapes can be investigated. 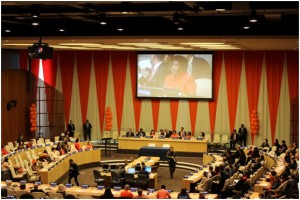 “Far too often, sexual and gender-based crimes go unpunished and the perpetrators walk free. Society turns a blind eye and a deaf ear,” U.N. Women Executive Director Phumzile Mlambo-Ngcuka said in her speech at the official U.N. commemoration of the International Day to Eliminate Violence against Women today.

“No country, no culture, no age group is untouched by this massive and pervasive human rights violation,” she said. Mlambo-Ngcuka said it was important for men and boys to stand up against violence,

“We all have a role in changing norms that accept or ignore violence and confer sexual entitlement,”

“This includes having more men and boys standing up against violence, denouncing it, and stopping it,” she said.

Ban said, “Violence against women and girls is a global pandemic that destroys lives, fractures communities and holds back development.”

“It is not confined to any region, political system, culture or social class. It is present at every level of every society in the world. It happens in peacetime and becomes worse during conflict.”

“But violence against women and girls does not emerge from nowhere.”

“It is simply the most extreme example of the political, financial, social and economic oppression of women and girls worldwide,” he added.