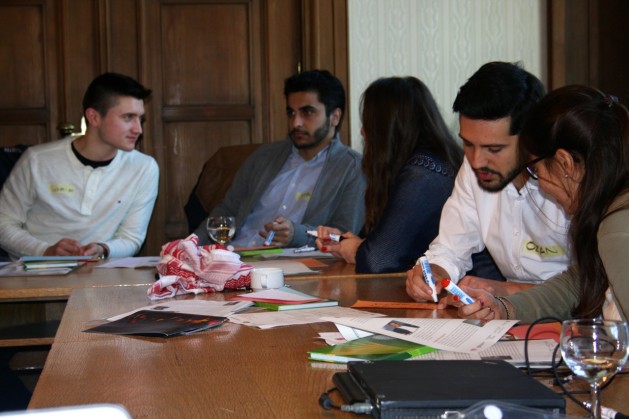 Young inclusion leaders participating in a workshop session to discuss the setting up of a diversity and inclusion network for future leaders from among Germany’s ‘people of color’, Berlin 2014. Credit: Ina Meling/Integration Commissioner Büro Tempelhof-Schöneberg

BERLIN, Dec 23 2014 (IPS) - A unique initiative – the Network Inclusion Leaders (NILE) project – has just held its second workshop here to set up a diversity and inclusion network for future leaders from among Germany’s ‘people of color’, or persons from different ‘non-white’ cultural backgrounds.

The event was held from Dec. 9 to 13in Berlin’s Rathaus Schöneberg, where John F. Kennedy delivered his iconic “Ich bin ein Berliner” freedom and solidarity speech to 400,000 West Berliners in 1963.

The workshop brought together 15 talented game changers aged between 18 and 28 from Afro-German, Turkish, Kurdish, Latin American and German-Asian backgrounds, selected from across the country to engage with illustrious key speakers from Germany, the United States and the United Kingdom in sessions designed to discuss instruments for promoting anti-racism, diversity and migrant-friendly agendas.

"Democracy needs strong, well-networked minorities. When you look around Germany, from parliament to media, public and private sectors, well it's still pretty white, there's a lot of work to be done" – Gabriele Gün Tank, Commissioner for Integration in Berlin Tempelhof-Schöneberg and co-founder of Network Inclusion Leaders (NILE)

The speakers  included Simon Woolley, Director of Operation Black Vote (UK), Mekonnen Mesghena, Director of Migration and Diversity at Berlin’s Heinrich-Böll Foundation, Kwesi Aikins, Policy Officer at the Centre for Migration and Social Affairs, Nuran Yigit, expert in anti-discrimination and board member of the Berlin-Brandenburg Migration Council, Terri Givens, Associate Professor at the University of Texas at Austin and a specialist in the politics of race, and Professor Kurt Barling, a BBC special correspondent.

NILE is the brainchild of two alumni of the 2013 German Marshall Fund’s (GMF) Transatlantic Inclusion Leaders Network (TILN) – 35-year-old Gabriele Gün Tank, Commissioner for Integration in Berlin Tempelhof-Schöneberg, and 28-year-old researcher and social activist Daniel Gyamerah, head of Each One Teach One (EATO), a black literature and media project in Berlin.

NILE was set up through collaboration with NGOs, top institutions including federal ministries and assistance from the influential Heinrich-Böll Foundation which is affiliated with the Green Party, the U.S. embassy and the Eberhard-Schultz-Stiftung (Foundation for Human Rights and Participation).

“We are moving forward with inclusive governance, inclusion best practices and empowerment training,” said Tank.  “This is of critical importance if we are to bridge the migration gap for a fairer, social and political representation of minorities at all levels.”

Engaging young Muslims within a climate of hostility

Mersiha Hadziabdic, aged 25, said that she joined the NILE initiative confident that networking and coalition building plays a crucial role in steering change relevant to her generation.

Born in Sarajevo, Bosnia, she came to Berlin as a three-year-old refugee when her family fled the Prijedor massacre, one of the worse war crimes along with the Srebrenica genocide perpetrated by the Serbian political and military leadership’s ethnic-cleansing drive, which killed 14,000 civilians.

“My background means a lot to me, and for this reason I am involved with the Bosnian community in Berlin, my home town,” she told IPS.

Wearing a headscarf in Berlin, Mersiha is often mistaken for a Turkish woman, with its attendant stereotypes of submissiveness and low expectations.

But, like 25-year-old Soufeina Hamed, a Tunisian-born graduate in intercultural psychology from the University of Osnabrück, who is active in Zahnräder Netzwerker, an incubator for Muslim social entrepreneurship, Mersiha is an internet savvy and project team member of JUMA (Young Active and Muslim), which offers management, rhetoric and media skills training to young German Muslims.

”I see myself as part and process of this vibrant, committed and capable Muslim youth which has something important to contribute and wants to be involved in the conversation,” she said.

Just like Ozan Keskinkilic, an MA student in international relations from a Turkish-Arab background who is active in the Muslim-Jewish Conference (MJC) for peaceful inter-religious dialogue, she noted that this conversation involves engaging in a climate of anti-migrant and refugee hostility.

That hostility is currently finding expression in populist rallies, such as the Dresden march on Dec. 8, where 15,000 anti-immigrant protesters, mostly from PEGIDA (Patriotic Europeans Against the Islamisation of the West), marched to the former 1989 freedom rallying cry of “Wir Sind das Volk” (We are the People).

Young, talented and ambitious, Mersiha, Soufeina and Ozan are part of Germany’s four million Muslims residents and citizens, about five percent of the country’s population, of whom 45 percent have German citizenship.

According to the Verfassungsschutz, Germany’s intelligence agency, approximately 250,000 Muslims live in Berlin, 73 percent of whom are of Turkish background and one-third of whom have German citizenship. They belong to that population sector whose qualifications and skills are raising inclusion and access expectations which demand more level playing fields.

Creating a critical mass for change

The NILE initiative aims to channel personal issues relating to emotional damage inflicted by racism, discrimination or the traumas of fleeing from conflict zones into a process of empowerment towards common, personal and professional goals.

Empowerment and leadership tools are taught as means of engaging with the world as it is, gaining an understanding that ‘persons of color’ are neither powerless nor invisible.

Kurt Barling, who has carved a role of influence for himself by exposing stories which shape communities but too often remain hidden by a majority oblivious to the perspectives of others, had a clear mentoring message: 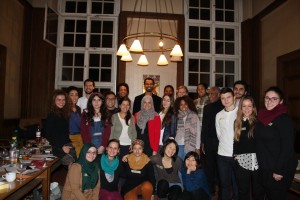 “Take control, shape your narratives with the new digital space available and build trust relationships with the authorities to change how the media frames and reflects our communities and our issues.”

“Freedom of speech definitely stops at racial slander and incitement,” explained Kwesi Aikins, “and you can challenge that in the courts. Even human rights education is a human right.”

“Martin Luther King did not just have a dream, he had a plan,” said Simon Woolley of Operation Black Vote (UK). Woolley was invited by NILE to explain to the young participants how they can take advantage of the torch handed to them all the way back from the civil rights movement, including harnessing their own electoral muscle because the black vote counts. “The bottom line,” he said, “is that power talks to power”.

NILE workshop participants agreed that the challenge facing young leaders is to find their role within the constraints of conflicting choices on offer between blending, assertiveness and the tiring fight for a fair share.

Maria-Jose Munoz a native of Bolivia, whose research interests focus on the Madera river energy complex on the Bolivia-Brazil border, knows she has an uphill struggle ahead of her – emerging in a white, male-dominated energy policy field.

Wrapping up her experience at NILE, she said: “We are all just looking for belonging and a way to engage in a personal and public dialogue, building bridges between our often conflicting identities.”

“As minority communities, we often find a blocked path towards common goals. NILE helped me understand that I can be strong and that, by coalescing with others, I can tear down these walls.”