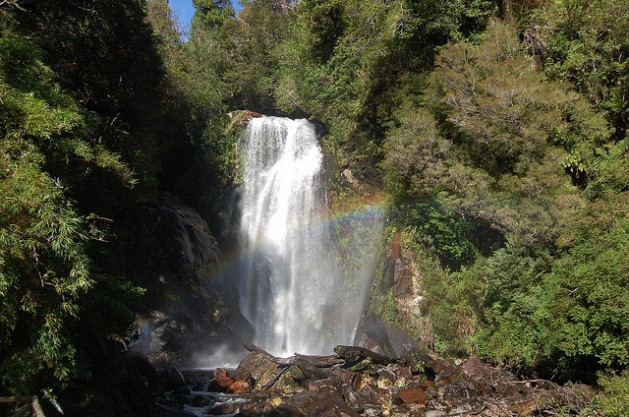 Cascada Barba de Abuelo, a waterfall in Aitken Park in the southern Chilean region of Aysén. Although the region has some of the world’s biggest freshwater reserves, local residents have to pay for the water they use for household needs and irrigation. Credit: Marianela Jarroud/IPS

SANTIAGO, May 27 2015 (IPS) - Family farmers in Chile are pushing for the reinstatement of water as a public good, to at least partially solve the shortages caused by the privatisation of water rights by the military dictatorship in 1981.

“Why should we pay for water rights if the people who were born and grew up in the countryside always had access to water?” Patricia Mancilla, a rural women’s community organiser in the southern region of Patagonia, remarked to Tierramérica.

That is a question echoed by small farmers throughout Chile.

This long, narrow country is rich in water, but it is unequally distributed: while to the south of Santiago annual freshwater availability per capita is over 10,000 cubic metres, it is less than 800 cubic metres per capita in the north, according to a 2011 World Bank study.

But the 1980 constitution made water private property, and the Water Code gives the state the authority to grant use rights to companies free of charge and in perpetuity. Water use is regulated by the Code, according to the rules of the free market.

The laissez-faire Code allows water use rights to be bought, sold or leased, without taking into consideration local priorities and needs, such as drinking water.

“Chile is the only country in the world to have privatised its water sources and water management,” activist Rodrigo Mundaca, secretary general of the Movement for the Defence of Water, Land and the Environment (MODATIMA), told Tierramérica.

Mundaca, an agronomist, added that Chile’s legislation “separates ownership of water from ownership of land, giving rise to a market for water,” which means there are people who own land but have no water, and vice versa.

“Water is now, without a doubt, the most important environmental issue in this country. Small farmers have lost their land, and there are municipalities like Petorca, where more than 3,000 women live on their own because their husbands and partners have gone elsewhere to find work.” -- Rodrigo Mundaca

The 1973-1990 dictatorship of General Augusto Pinochet created two categories of water use rights: consumptive and non-consumptive.

Consumptive water use refers to water that is removed from available supplies without returning to a water resource system.

In this category, 73 percent of water rights have gone to agriculture, nine percent to the mining industry, 12 percent to industry and six percent to the sanitation system, Mundaca said.

Non-consumptive use refers to water that is used but not consumed. This mainly includes water withdrawn for the purpose of generating hydroelectricity, and since 2009, 81 percent of these water use rights have been in the hands of the Italian-Spanish company Enel-Endesa, the activist said.

As a result, “today the communities of northern Chile are at loggerheads with the mining corporations, over water use; the communities of central Chile with agribusiness and agroexporters; and communities in the south with hydropower plants and forestry companies,” Mundaca said.

“Water is now, without a doubt, the main environmental issue in this country. Small farmers have lost their land, and there are municipalities like Petorca, where more than 3,000 women live on their own because their husbands and partners have had to leave to find work,” he added.

Latin America in general is one of the regions most vulnerable to the crises caused by climate change, according to the World Bank. But in Chile, small farmers are less vulnerable to climate change than to the “theft” of their water by large agroexporters, activists say.

Petorca, a case in point

“The water business reflects the conflicts of interest, influence peddling and corruption in Chile,” Ricardo Sanhueza told Tierramérica. Sanhueza is a small farmer who lives in the municipality of Petorca, 220 km north of Santiago, which illustrates the impact of the water management model put in place 34 years ago.

“I remember that even though we suffered from a major drought between 1987 and 1997, we always had clean drinking water,” he said.

The 70,000 people who live in Petorca, located in the province of the same name, depend on tanker trucks for their water supply.

“The problem here isn’t related to the climate,” he said. “The problem is the over-exploitation of the land and the abusive use of water….Political interests are undermining the foundations of small-scale family farming.”

According to a study by the National Human Rights Institute (INDH), a government body, the province’s water shortages are not only caused by drought but also by “business activities in that area.”

The report also states that the granting of rights to use water sources that have been exhausted has played a part in generating a water crisis that seriously affects the quality of life of the residents of the province of Petorca.

The prioritisation of the use of water for productive activities rather than human consumption has aggravated the problem, the study goes on to say.

Mónica Flores, a psychologist with the municipal Public Health Department, told Tierramérica with nostalgia that the Petorca river had completely dried up, putting an end to social activities and community life surrounding the river.

“The river emerged in the Andes mountains and flowed to the ocean,” she said. “But today you just see a gray line full of dirt and stones.”

“It marked a before and after,” Flores said. “My childhood revolved around the river: I played there with my friends, we would swim, we would flirt with each other. But my daughter’s life isn’t the same, it’s much lonelier.

“Many rituals played out by the river, which was the heart, the spinal column of the province,” she said, stressing the impact on the local population of the drying up of the river.

But Petorca is just one example of the water problem in Chile.

On Mar. 22, World Water Day, the INDH declared that “Chile’s development cannot come at the cost of sacrificing the water of local communities, or at the cost of mortgaging the future of coming generations.”

The hydric resources commission in the lower house of Congress is currently debating a reform of the Water Code, which would represent significant advances, such as giving a priority to water use for essential needs and replacing water use rights in perpetuity with temporary rights.

But the modifications will not be retroactive, and most water use rights have already been granted.

Moreover, the water use privileges enjoyed by the mining industry will not be touched by the reform. Nor has the question of water shortages for essential uses by small farmers and indigenous communities been addressed. And there is no talk of a constitutional amendment to make water a public good once again.

The constitution put in place by the dictatorship “states that all people are free and equal in dignity and rights,” Mundaca said. “However, vast segments of the population, deprived of water, depend on tanker trucks for drinking water, can only do a quick rinse around key areas instead of showering, and go to the bathroom in plastic bags.

“It’s shameful and wrong. People have to regain access to water one way or another,” he said.