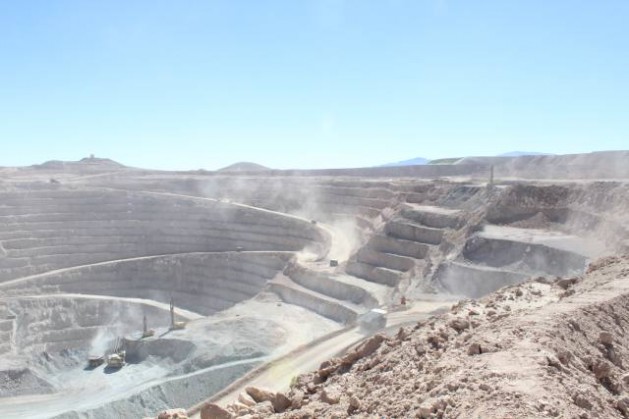 SANTIAGO, Aug 8 2013 (IPS) - The arid climate in northern Chile has forced mining companies to seek out new sources of water. The main source is seawater from the Pacific Ocean, whose use is expected to increase significantly in the coming decade despite the high costs of extraction and transport.

The vast northern region of Chile encompasses the Atacama Desert, one of the most arid spots on the planet. It is also home to the world’s biggest copper reserves, the main source of revenue in this South American nation with 6,435 kilometres of Pacific coastline.

“In arid and semi-arid regions, where the availability of water is very limited, the ocean is an alternative for industrial processes and other uses,” Luis Cisternas of the Centre of Scientific and Technological Research for Mining told Tierramérica*.

According to figures from the Chilean Mining Council, 12,615 litres per second of freshwater were used for copper extraction in 2011 – the same year that a World Bank report warned of a considerable decline in the availability of surface water in Chile.

“The use of seawater is not only a solution for the mining companies, but also a way of freeing up freshwater for other uses and allowing the restoration of damaged ecosystems,” said Cisternas, a professor at the University of Antofagasta.

While the mining industry has used seawater in different parts of the world for many years, in Chile there are only a few isolated cases, usually on the part of small or medium-sized companies that deal with minerals whose extraction is not affected by the salinity of the water, he explained.

The first big mining company to use seawater in Chile was Minera Esperanza, a joint venture between Antofagasta Minerals and the Marubeni Corporation.

The company’s copper mine uses untreated seawater, transported through a 145-kilometre-long pipeline, in all of its processes. Seawater currently accounts for 30 percent of all of the water is utilises.

The state-owned National Copper Corporation of Chile (CODELCO) will use seawater for the first time to exploit the sulphide reserves of the Radomiro Tomic mine, in one of the structural projects the company is implementing to extend the useful life of a number of its mines.

“In the case of the Radomiro Tomic (RT) Sulphides project, the use of seawater means that pressure will not be placed on the freshwater resources of the Andes Mountains or other inland surface water reserves, in an area where no new water resources are available,” a CODELCO corporate source told Tierramérica.

The RT Sulphides project represents a new line of copper concentrate production, which involves greater consumption of water per ton of copper produced than the mine’s current exploitation of oxide ore.

“The use of desalinated seawater will make it possible to extend the useful life of the mine without increasing consumption of water from the mountains,” added the source.

For its operations, RT Sulphides will extract seawater and desalinate it through reverse osmosis, a process that uses pressure to force water through a membrane which retains the dissolved solids.

The treated water will be transported to the mine’s facilities, located 3,000 metres above sea level, through a pipeline stretching 160 kilometres. The operation will entail an expenditure of 2.6 dollars per cubic metre, according to CODELCO.

According to studies, the costs associated with a seawater supply system can represent around 20 to 30 percent of the total costs of a project located more than 150 kilometres from the coast and between 3,000 and 4,000 metres above sea level.

“This means it will be necessary to find more efficient ways of supplying seawater to mining companies,” said Cisternas.

The ideal approach, he said, “is to use untreated seawater, because desalination requires energy and causes harmful effects for the environment, but this cannot always be done.”

“It will be necessary to find a way to produce water of different qualities from seawater, since different technologies and minerals require different types of water,” he added.

For CODELCO, desalinated seawater “is not a harmless solution, because it implies greater energy consumption both for its treatment and, above all, for moving it through the pipeline to where the mines are located.”

“It is also not economically viable for projects with narrower profit margins, or for projects that do not have a guaranteed energy supply,” explained the CODELCO source.

Moreover, even if safeguards are adopted, the installation of desalination plants also generates impacts on the coastline and the marine environment.

Samuel Leiva, the campaign coordinator at Greenpeace Chile, warned of the potential long-term environmental impact of the desalination process.

Desalination plants require energy in a region where there is no water, “so the alternative is to implement projects that use fossil fuels and increase atmospheric emissions and cause environmental damage all along the coast” by releasing higher-temperature water back into the ocean, he told Tierramérica.

According to Chilean water utility Aguas Antofagasta, the use of desalination technology dates back to 2003 with the entry into operation of the Antofogasta Desalination Plant, aimed at providing part of the water supply for the population.

There are currently 14 projects of this kind underway in the country, 11 of them connected to the mining sector.

By 2022, an estimated 10 billion dollars will have been invested by the private sector in 16 new seawater treatment plants.