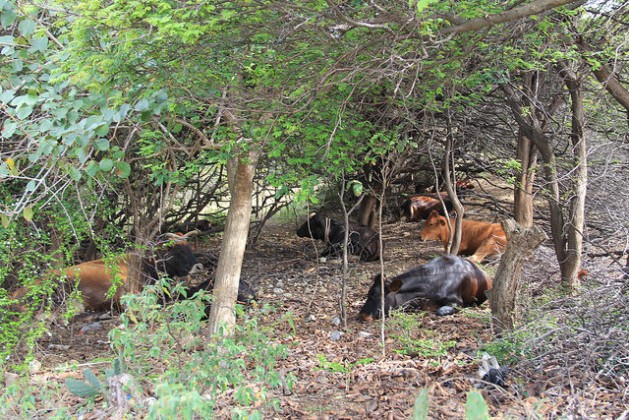 CASTRIES, Jun 2 2015 (IPS) - St. Lucian farmer Anthony Herman was hoping that next year he’d manage to recoup some of the losses he sustained after 70 per cent of his cashew crop withered and died in the heat of the scorching southern Caribbean sun.

But on June 1, the beginning of the Atlantic hurricane season which coincides with the rainy season, the 63-year-old man, who has been farming for four decades, received “frightening” news about weather conditions in the region over the next year or so.

“More than 50 per cent of our agriculture is rain-fed. … So it is going to affect agriculture, particularly small farmers, who are the ones who cannot afford irrigation at this time." -- Leslie Simpson

“It is frightening,” Herman tells IPS on the sidelines of the Regional Climate Outlook forum for the 2015 hurricane season being held here June 1-2.

Herman, who is board secretary and project coordinator at the Bellevue Farmers Cooperative in Choiseul, in southwestern St. Lucia, says he will summon directors to devise a response plan.

“When we hear of the threat of drought that’s going to be lengthened this year and going into next year, this to me, is frightening,” Herman tells IPS.

At the two-day forum, organised by the Caribbean Institute for Meteorology and Hydrology (CIMH), climatologist Cèdric Van Meerbeeck puts the forecast into perspective by referencing 2009, a year when extreme dry conditions triggered widespread water rationing across the region.

“Temperatures are going to feel hotter than usual and that is pretty much throughout the Caribbean,” Van Meerbeeck told the gathering of meteorologists, natural disaster managers and other stakeholders from 25 Caribbean countries and territories. 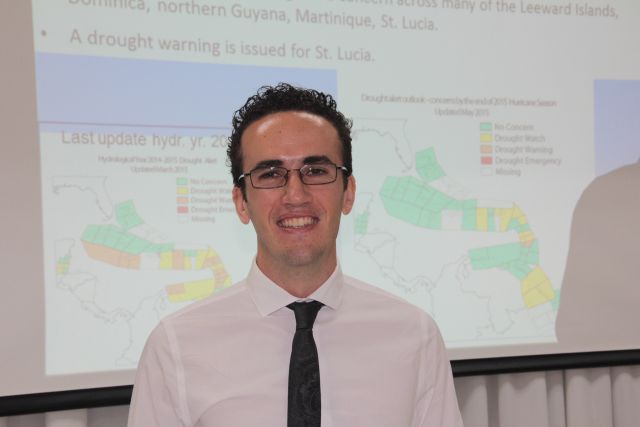 Climatologist Cèdric Van Meerbeeck of the Caribbean Institute for Meteorology and Hydrology (CIMH), says drier than normal conditions in the Caribbean will continue through the 2015 wet season and into 2016. Credit: Kenton X. Chance/IPS

He said there is probably going to be less rainfall accumulating for much of the region, even as The Bahamas, Belize and The Guianas are expected to see higher rainfall as a result of El Nino.

“If we are going to get a wet season that is drier than usual, we are already starting to be worried about the next dry season,” Van Meerbeeck said.

“Why? The dry season is our tourism season. That is when most of our water is being used, not only by tourists but also extinguishing [bush] fires, also by the farmers if they want to irrigate.”

Herman shares Van Meerbeeck’s concern, telling IPS that the municipal provider of water for commercial and domestic consumers in St. Lucia is already “under pressure because, at the minute, a number of persons are using that water for farming purposes.

“It is expensive, but there’s not much choice. So it means that sitting here at this meeting and getting that information, it gives me a few months to go back, sit with my board about a risk reduction management plan as to how we, as a farmers organisation, can educate our members in the first instance, how best to deal with the issues of serious rain water shortages and what it is we can do with that information.”

Herman knows too well the importance of a risk reduction management plan, having been robbed by the dry conditions of almost three quarters of his cashew crop, some 5,500 dollars this year, a substantial amount for a small farmer.

“The flowers dried out and they were not able to be pollinated and even where they were actually pollinated, the small cashew literally burnt and that has caused me great economic loss,” he tells IPS.

The loss was not limited only to the cashew nut themselves, as the fruit is an important input on Herman farm, where he keeps about 40 goats.

“The cashew fruit is used for my goats as animal feed,” he tells IPS, adding, “It means I have to find the resources now, buy animal feed, whereas in previous years, between grass and cashew fruit, that sustained my livestock.” 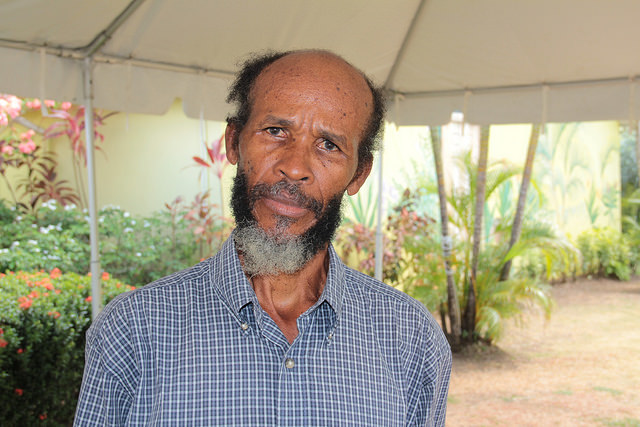 St. Lucian farmer Anthony Herman lost 70 per cent of his cashew crop in 2015 as a result of a drought in his country. Credit: Kenton X. Chance/IPS

“I didn’t get to sell cashew so it is less resources, so I have to dip into my other sources of revenue, which is vegetables,” he lamented.

“More than 50 per cent of our agriculture is rain-fed. … So it is going to affect agriculture, particularly small farmers, who are the ones who cannot afford irrigation at this time,” he tells IPS of the forecast.

“I operate out of Jamaica and last year we had a really serious dry spell in the rainy season itself and it affected agriculture to the point where the overall effect was felt in the whole economy. So to hear that we are in for a similar situation is very heartrending at this point,” Simpson tells IPS.

In 2014, the Jamaican economy lost nearly one billion dollars as a result of drought and brush fires caused by extreme heat waves.

But like Van Meerbeeck, Herman sees the early warning as an opportunity to take steps to mitigate against the severe weather, which climatologists say is as a result of human-induced climate change.

“What we really want in the long term is to be able to mitigate the adverse impacts of climate change and use the benefits of climate change, because it is not all negative, but largely, we don’t know what the positive effects will be at this stage,” Van Meerbeeck tells IPS.

“When you build mitigation strategies on drought, on heat waves, on wet spells, etc., — those things that really impact us now — then we are automatically building the human capacity and the technological capacity to confront the challenges further down in time,” Van Meerbeeck says.

But with any cashew crops and a herd of goats at risk, Herman is already considering a short-term plan to process wastewater and use it for irrigation.

“I am not a pessimist, so I want to see this situation as an opportunity to do other creative things for the sector,” he tells IPS.