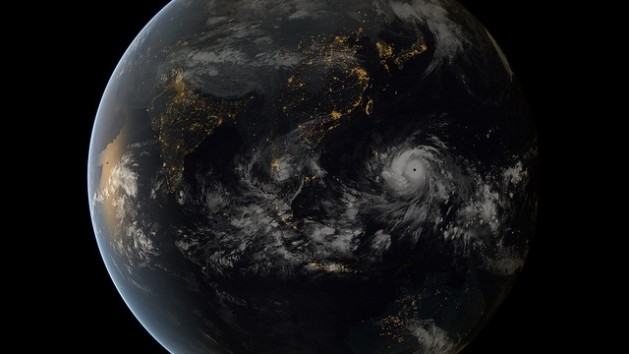 NEW YORK, Jun 5 2015 (IPS) - Imagine this, if you can: the world as we know it torn apart by ‘hypercanes’, storms with wind speeds of over 500 mph, capable of producing a system the size of North America. A tiny fraction of humanity driven to a civilisation underground, the remaining masses left to fend for themselves on the virtually uninhabitable Earth’s surface. Species extinction is complete and genetic engineering is at a new height, to ensure the continued survival of what’s left of the human race.

"I don't think I use the term "climate change" once in the book. That was deliberate. [The] last thing most people want is a preachy novel where the characters are obvious stand-ins for the author's opinion." -- Kat Ross
This is the setting for ‘Some Fine Day’, a novel for young adults by Kat Ross that falls into an emerging sub-genre of science fiction known as climate fiction, or ‘cli-fi’.

Readers follow the story of sixteen-year-old Jansin Nordqvist, who’s on the verge of graduating from a military academy when her parents surprise her with a trip to the surface.

Thrilled at the chance to see the ocean, breathe fresh air and experience real sunlight, Jansin cannot anticipate what her future holds: a period of captivity with the surface ‘savages’ she’s been warned about all her life, and discoveries about the underground regime that leave her questioning everything she’s ever been taught.

Over the past two years, cli-fi novels have gone from being a fringe sub-category to a widely referenced genre on sites like Amazon, as more and more writers turn their eye to the horrific realities of catastrophic climate change.

With global climate negotiations hamstrung and world leaders unable, or unwilling, to take steps to reduce greenhouse gas emissions by 40-70 percent by 2030 to prevent the worst forms of global warming, there is no doubt that natural disasters will become more frequent and more extreme.

Given that youth will bear the brunt of an increasingly savage climate, it is impossible to underestimate the role that cli-fi could play in informing and inspiring the younger generation to take action now against the worst-case scenarios of the future.

IPS sat down with Kat Ross to discuss the ways in which fiction can contribute to the debate that is raging around the world on the ‘ifs, whens and whats’ of climate change.

Q: When did you first become interested in the ‘cli-fi’ genre, and what drew you to this particular form of storytelling? 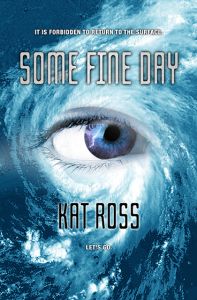 Cover art for Some Fine Day.

A: I have to give props to Dan Bloom for coining the term cli-fi. It’s super catchy, and he’s really given the genre a major boost. But when I sat down to write the book, there was no question that climate change would be a big part of the plot. As a journalist, I’d been covering it for almost a decade, and every year, the predictions got scarier. Some stopped being predictions about the future and started actually happening.

I was struck by the massive disconnect between what scientists and the public were saying – like hey, can we do something about this? – and the total lack of government action. The elephant in the room is obviously the fossil fuel lobby, among others. They spend billions of dollars spreading “doubt” about the science, which is ludicrous. I think fiction can be a great way into a conversation about these issues, especially with young people.

Some Fine Day starts with a basic question: what if the worst-case scenarios actually come to pass?

Q: Is the book, though set in the future, actually a commentary on our own times? If so, what do you think are the most important takeaways for young people at this moment in history?

A: Oh, definitely! I think it’s pretty explicit that the ravaged world in the story – about 80 years or so from now – is a direct result of doing too little, too late on runaway CO2 emissions. But the cool thing is that while we may have one toe at the edge of the precipice, we haven’t taken that plunge yet. There’s still time to change the future. And young people have been stepping up for years now. Adopt a Negotiator is a great initiative that works a lot with youth. They bring accountability to these very opaque negotiations.

Ultimately, it’s the people in their teens and twenties who will be living with the consequences of the choices we make today – and they’re not happy. Governments better start listening.

Q: The book both celebrates and condemns the limits to which humanity has pushed technology and scientific experimentation — on the one hand, an entire civilisation living underground entirely as a result of scientific innovation; on the other, genetic engineering gone horribly awry. What were your thoughts as an author navigating these two extremes? 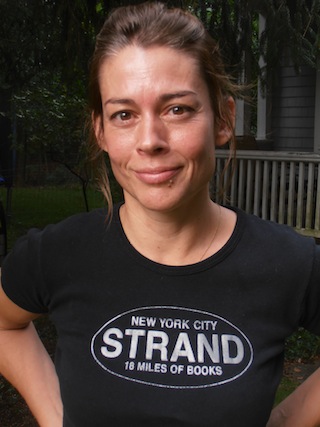 A: Well, that’s the thing, right? Technology itself isn’t good or evil, it’s what we do with it. This is not a new question. Just look at Mary Shelley’s Frankenstein, published in 1818. We’re still fascinated by her tale of death and reanimation, and the awful consequences of scientific hubris. The basic idea is that everything comes with a price, although in the case of a switch to renewables, there doesn’t seem to be quite the same downside as bringing a giant dead guy back to life.

For Some Fine Day, I had a lot of fun asking questions like, exactly how do you build an underground city? Where does the air come from, the food and water? Are hypercanes possible? (According to a scientist at MIT, the answer is yes) If all the icecaps melted, how much would the seas rise? What would that look like for the Eastern Seaboard?

In short, I have a fondness for creepy mutants and couldn’t help throwing a few into the mix.

Q: Themes of the surveillance state, fascist governance and the so-called ‘one percent’ run consistently through the book, with the protagonist first a product of, then an enemy of, all of the above. How did you imagine or hope your target audience would understand these ideas in the context of the story?

A: It’s become something of a fixture of the dystopian genre to have jack-booted thugs running things. But I think it actually made sense in the context of the story. These are people who have lost everything. They’ve been driven from the surface by massive storms, ocean acidification, species extinction, the whole enchilada. The transition to underground prefectures was spearheaded by the military, and now they’re facing very limited resources. Every drop of water, every bite of food is rationed. There’s a tendency to hoard, and to fight with your neighbours. So it’s not a very democratic society.

As you say, what’s interesting about the main character, Jansin, is that she starts off as one of the true believers – a special ops cadet who’s been trained all her life to never question orders. But she evolves over the course of the story to understand that she doesn’t have to live like that. It doesn’t have to be “us versus them.” Which is the most powerful propaganda tool ever invented.

It’s one of the reasons I like to write about young protagonists. I think in general, their minds are more open. Their core beliefs haven’t yet fossilized.

Q: There is a sense of urgency to the book that makes it an absolute page-turner. While this is a work of fiction, it does in many ways mirror the current emergency humanity finds itself in. Was this intentional? Or was the point more to create a thriller, and leave the readers to draw their own conclusions about the ‘climate politics’ of the world you create?

A: I don’t think I use the term “climate change” once in the book. That was deliberate. It’s pretty clear what’s happened, and frankly, the last thing most people want is a preachy novel where the characters are obvious stand-ins for the author’s opinion. Or maybe you do, but it’s easy to go out and find that kind of book if it’s your bag.

Some Fine Day is targeted at the young adult audience (though I think it’s for anyone), so I needed to be extra-careful there. Stealth indoctrination! Just kidding. No, I mainly wanted to tell a ripping good story, with characters you care about, and build a world that felt real in every sense.

Margaret Atwood pretty much summed it up. She says: “It’s rather useless to write a gripping narrative with nothing in it but climate change because novels are always about people even if they purport to be about rabbits or robots. They’re still really about people because that’s who we are and that’s what we write stories about.”

But if anyone reads my book and it inspires them to say to themselves, “Holy sh*t, this really sounds bad. Could any of this actually happen? Hey, I heard there’s a rally going on in the town square on Sunday. Maybe I should go see what they have to say…”

Well, I’d be just fine with that.