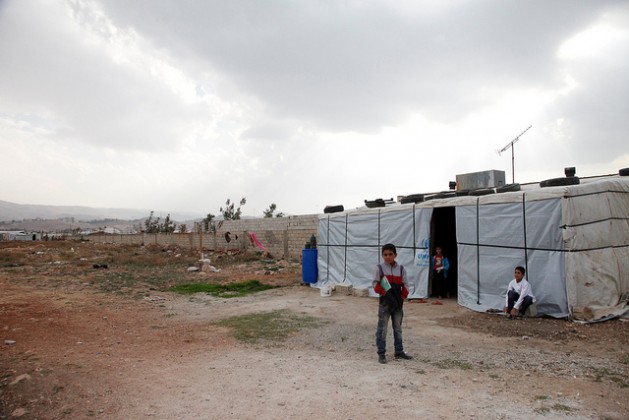 WASHINGTON, Jul 2 2015 (IPS) - The United Nations’ food aid organisation, the World Food Programme (WFP), said on Jul. 1 that up to 440,000 refugees from war-torn Syria might have to go hungry if no additional funds are received by August.

“Every time we take one step forward, we fall ten steps back. I have given up the hope that we will ever live normally again. I know the world has forgotten us; we’re too much of a burden." -- Fatmeh, a Syrian refugee who fled to Lebanon three years ago
Though the agency received 5.38 billion dollars in 2014, the continuing emergencies in Syria, Iraq and elsewhere mean that needs now far outpace available funding.

From assisting an estimated 2.5 million refugees last year, limited funding has forced the organisation to scale back its operations, with the result that just 1.6 million refugees are currently receiving rations.

A United Nations Development Programme (UNDP) report published in March 2015 revealed that an estimated 3.33 million refugees have fled Syria since 2014, making Syrians the second largest refugee population in the world, after the Palestinians.

The cuts come at a time when Syrian refugees are spending their fourth year away from home, unable to celebrate the annual Ramadan festival, one of the most important religious occasions celebrated by Muslims worldwide.

The upcoming winter may leave up to 1.7 million people without fuel, shelter, insulation and blankets.

WFP is fully funded by voluntary contributions from governments, companies and private individuals. The organisation reports that its regional programme in the Middle East is currently 81 percent underfunded and requires 139 million dollars to help Syrian refugees in Jordan, Lebanon, Egypt, Turkey and Iraq through September 2015.

“Just when we thought things couldn’t get worse, we are forced yet again to make yet more cuts,” WFP Regional Director for the Middle East Muhannad Hadi said in a press release Wednesday. “Refugees were already struggling to cope with what little we could provide.”

The humanitarian funding crisis began in 2013, when the number of Syrian refugees receiving food assistance from WFP dropped by 30 percent.

Food parcels were downsized in October 2014, following a WFP announcement in September that they have no funding available in December 2014 for programmes in Syria.

“When we announced the reductions in Jordan our hotlines were overwhelmed. Thousands of appeal calls come in each day. Calls from families that have exhausted their resources and feel abandoned […] by us all,” she said. “One woman told us, ‘I cannot stay […] if I cannot feed my children.'”

A fundraising campaign in December 2014 raised enough funds for WFP to carry on its programmes through December, but in January 2015, WFP cut the amount of money in electronic food cards provided to refugees from 27 dollars to 19 dollars.

Starting this month, the value fell to just 13.5 dollars.

This is not the first time WFP has faced a funding crisis. In 2009, aid operations in Guatemala, Bangladesh and Kenya faced reductions in supply of food rations due to a lack of funding. In 2011, a similar situation occurred in Zimbabwe.

When faced with funding shortfalls, WFP suspends programmes and only provides aid to the most vulnerable groups – pregnant women, children and the elderly.

International efforts to relieve suffering caused by the Syrian crisis culminated in the Jun. 25 Regional Refugee and Resilience Plan (3RP) that called for 5.5 billion dollars to fund the needs of host governments, United Nations agencies and NGO aid operations in the area.

According to the Financial Tracking Service (FTS) of the U.N. Office for the Coordination of Humanitarian Affairs (OCHA), only 25 percent of the appeal has been met.

“This massive crisis requires far more solidarity and responsibility-sharing from the international community than what we have seen so far,” said U.N. High Commissioner for Refugees António Guterres in a Jun. 25 WFP press release.

“But instead, we are so dangerously low on funding that we risk not being able to meet even the most basic survival needs of millions of people over the coming six months.”

A WFP interview with Syrian refugees in Lebanon captures the refugees’ desperation:

“Every time we take one step forward, we fall ten steps back. I have given up the hope that we will ever live normally again,” said Fatmeh, a refugee who fled to Lebanon three years ago, in the WFP interview.

“I know the world has forgotten us; we’re too much of a burden. They’ve given up on us too.”

The crisis in Syria began in 2011 after security forces killed several pro-democracy protestors. Unrest followed with demands for President Bashar al-Assad’s resignation, to which he responded with violence.

The situation worsened with the rise of the armed group calling itself the Islamic State in Iraq and Syria (ISIS) in northern and eastern Syria. The country became a battleground between four forces – Assad’s pro-governmental forces, Kurdish fighters, ISIS, and rebel fighters eager to overturn Assad’s regime.

In the midst of the violence, Syrians are faced with a crumbling economy. The UNDP report revealed that four out of every five Syrians lived in poverty in 2014, and almost two-thirds of the population was unable to secure basic food and non-food items necessary for survival.